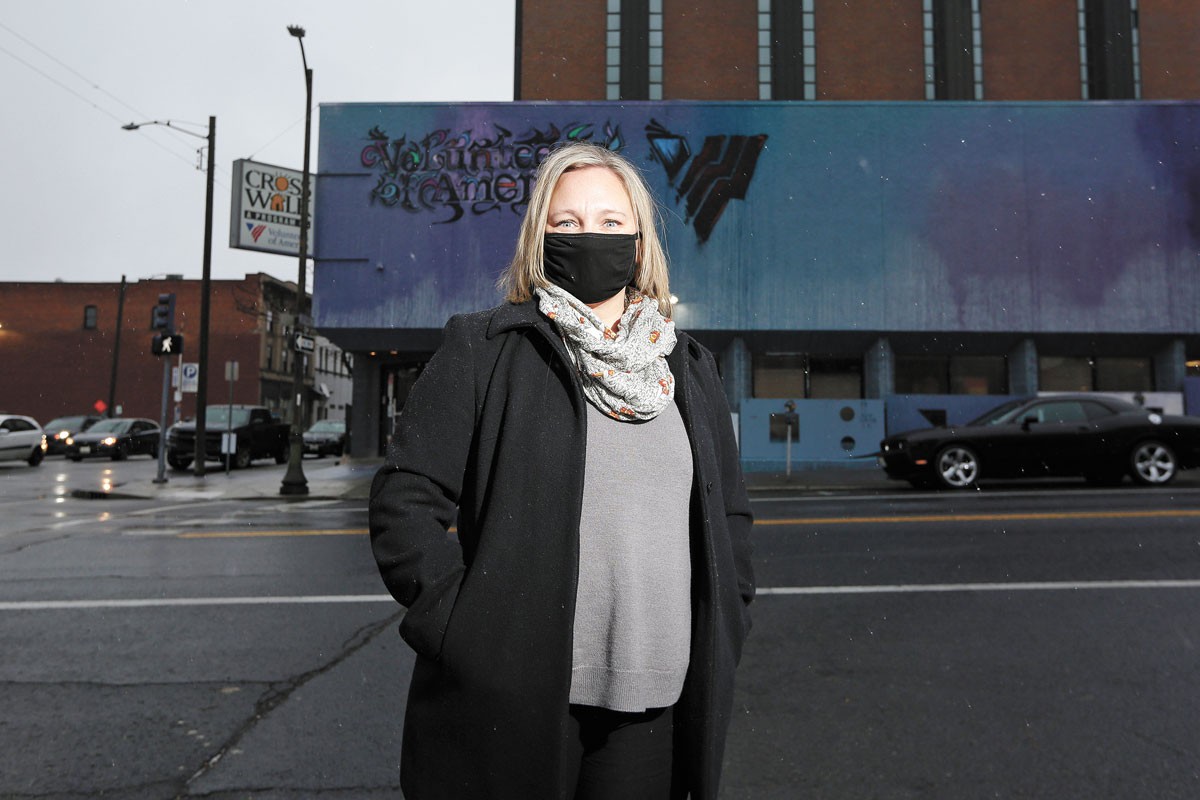 Young Kwak photo
Fawn Schott, CEO of the local Volunteers of America, the nonprofit that would operate a young adult shelter — if there were one.

Since the city of Spokane was awarded a $2.7 million grant this summer for a young adult shelter, city and regional leaders have agreed on one thing: The shelter is urgently needed.

What they can't agree on is where to put it. That's frustrated Fawn Schott, the president and CEO of the local Volunteers of America, the nonprofit that would operate the shelter.

"This is NIMBY at its core," Schott says. "Nobody wants a shelter in their backyard."

Spokane Mayor Nadine Woodward doesn't want the shelter in city limits, feeling that the city has borne too much of the burden in addressing a regional issue. And while Spokane Valley might be open to finding a spot for it, it would require a lengthy zoning change that could take at least a year.

Meanwhile, there's a clock: The state Department of Commerce grant is set to expire at the end of the year if no solution is found.

Last week, however, regional partners agreed on a plan that they hope will prevent the nearly $3 million from drying up and will lead to a long-term solution. The plan calls for a phased model, which will have VOA add young adult shelter beds to existing shelters while a permanent shelter location is found. The Department of Commerce is expected to allow an extension once presented with that plan, though as of Monday, the department says it hasn't seen any plan yet.

The agreement presents Spokane City Council President Breean Beggs, who has pushed for a solution on a location, with some optimism. But it still means a permanent young adult shelter location could be years away, with no more clarity on where it will go.

"Right now I'm in a good mood about it because we have a path forward. But I have been frustrated along the way because I've been focused on how important it would be to have a young adult stand-alone shelter," Beggs says. "That's the biggest gap we have in our system."

A young adult shelter is necessary not just because there's an overall lack of shelter beds for all age groups in Spokane, Schott says, but also because providing shelter to young adults is an effective way to prevent them from becoming chronically homeless through adulthood.

A majority of 18- to 24-year-olds who are homeless end up camping away from shelters because they don't feel safe in them, Schott says. Or they may not feel like they fit in.

"A young person doesn't see themselves as chronically homeless and needs intentional resources to get them on a pathway to start resolving homelessness," Schott says.

The Spokane Continuum of Care board, a collection of regional stakeholders, identified a young adult shelter as an area of great need and applied for the grant from the Department of Commerce as a region this summer. Right now, there is no shelter specifically designated for this age group.

VOA wouldn't want to open a young adult shelter downtown, due in part to safety concerns, Schott says. VOA is moving its teen shelter away from downtown to a spot near Spokane Community College for the same reasons. Ideally, Schott says, a young adult shelter would be somewhere near the new teen shelter. That way, it's near higher education institutions, and hopefully it could be near transportation services.

Woodward, however, wants the shelter outside Spokane. Through a spokesperson, Woodward declined an interview for this article, but city spokesman Brian Coddington says she views homelessness as a "regional challenge" that "requires a regional solution."

"Right now those are all in the city of Spokane, and predominantly in the downtown area," Coddington says. "That has created a disproportionate solution on homelessness in one neighborhood in particular."

As for the properties near Spokane Community College, those on the county side — just outside city limits — are not in areas zoned for "habitation by humans," Coddington says, but instead more industrial areas.

Beggs says Woodward wouldn't approve any shelter just inside city limits. That's partly because the city received some feedback from neighbors of the homeless shelter that opened this summer at 55 W. Mission Ave.

"She feels like people blame her for having a shelter near them," Beggs says. "She tried to engage with people and meet with them, and they were angry and frustrated with her. She says she doesn't have the bandwidth to deal with general unhappiness about shelters."

Meanwhile, Spokane Valley has its own obstacles to hosting a homeless shelter, says Mayor Ben Wick. He says the city's code would allow a homeless shelter in a multifamily use zone, but only through a conditional use permit. The process for such a permit could take some time, but Wick says that begs the larger question of whether putting homeless shelters in a high-density, multifamily zoning area is the right move.

"Is that really where we want a homeless shelter?" Wick says.

Wick says the Valley may be open to siting the young adult shelter within its city limits, but it will require a change to the city's comprehensive plan, which will take months at least.

Then, early this month, Woodward began to face pressure from another direction. Lisa Brown, director of the Department of Commerce, wrote her a letter expressing disappointment that the city hasn't agreed to locate the shelter within city limits.

"Political boundaries are invisible to young people who have no home because they've been kicked out, fled abusive relationships, exited foster care, or simply cannot afford rent," Brown wrote.

Brown also criticized the plan to use this money for added bed space in existing shelters.

But the next day, that all changed.

Last Thursday, some progress was finally made, Schott says. VOA was officially chosen as an operator for more young adult bed spaces — about 40 to 45 overall. Starting in April, young women will find bed spaces at Hope House, in an area separate from the older adults. And young men will find some spaces at another shelter that's yet to be determined. Those will be temporary locations until a permanent location is found.

Notably, Beggs says Woodward became more flexible on where a shelter may be located. That's because VOA said it would do outreach with neighbors on potential shelter locations, instead of city staff, Beggs says.

"That was her condition, that she would not have to be the one to explain it, wherever it was going," Beggs says.

Commerce must first approve this plan and sign off on it, and a spokesperson tells the Inlander that hasn't happened yet. But it remains likely that it will, despite a permanent location not being found by the end of the year.

Schott says that, all things considered, this plan makes the most sense.

"It gives us an interim option and the time to build it out the right way, by finding the right location and engaging the neighborhood," Schott says. "I am more optimistic." ♦