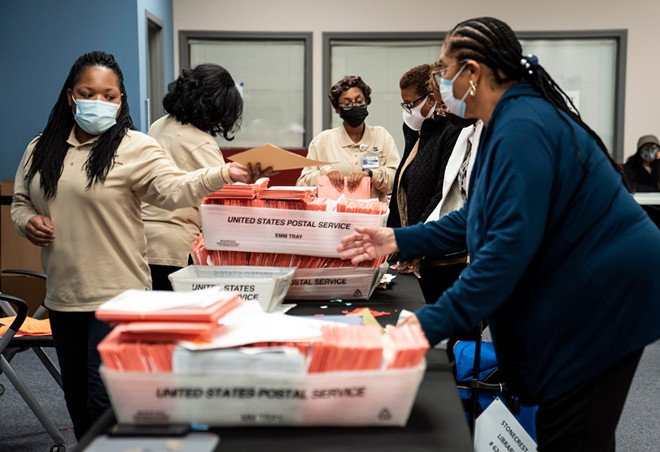 Nicole Craine/The New York Times
Poll workers sort ballots at the Dekalb County Commissioners office in Decatur, Ga., on Tuesday night, Jan. 5, 2021. Democrats inched closer to taking control of the Senate on Wednesday, winning one of the two Georgia seats up for grabs in a pair of runoff elections while the second contest remained too close to call.

ATLANTA — Democrats captured control of the U.S. Senate on Wednesday with a pair of historic victories in Georgia’s runoff elections, assuring slim majorities in both chambers of Congress for President-elect Joe Biden and delivering an emphatic, final rebuke to President Donald Trump in his last days in office.

The Rev. Raphael Warnock defeated Sen. Kelly Loeffler, becoming the first Black Democrat elected to the Senate from the South. And Jon Ossoff, the 33-year-old head of a video production company who has never held public office, defeated David Perdue, who recently completed his first full term as senator.

The twin victories were overshadowed in Washington when supporters of Trump stormed the Capitol. The police were forced to evacuate members of Congress as clashes erupted on the steps and rioters broke through into Capitol itself.

By midafternoon, protesters had gathered at Georgia’s Capitol, prompting the evacuation of Secretary of State Brad Raffensperger and some of his staff members. Raffensperger had come under fire from Trump supporters for certifying the results of Georgia’s election, delivering Georgia’s 16 electoral votes to Biden.

The results of the Georgia Senate races will reshape the balance of power in government. Although the Democrats will have the thinnest of advantages in the House and the Senate, where Vice President-elect Kamala Harris will break the 50-50 tie, they will control the committees as well as the legislation and nominations brought to the floor. That advantage will pave the way for at least some elements of Biden’s agenda.

“For the first time in six years, Democrats will operate a majority in the United States Senate — and that will be very good for the American people,” Sen. Chuck Schumer of New York, who will become the new majority leader, said at a celebratory news conference in the Capitol.

With 98% of the vote counted late Wednesday afternoon, Warnock led Loeffler by about 62,000 votes, and Ossoff was ahead by about 25,000 votes.

The runoffs were an important bellwether for a Deep South state where formerly dominant Republicans have begun to see their advantage slip because of an increasingly diverse electorate and the changing preferences of suburban voters.