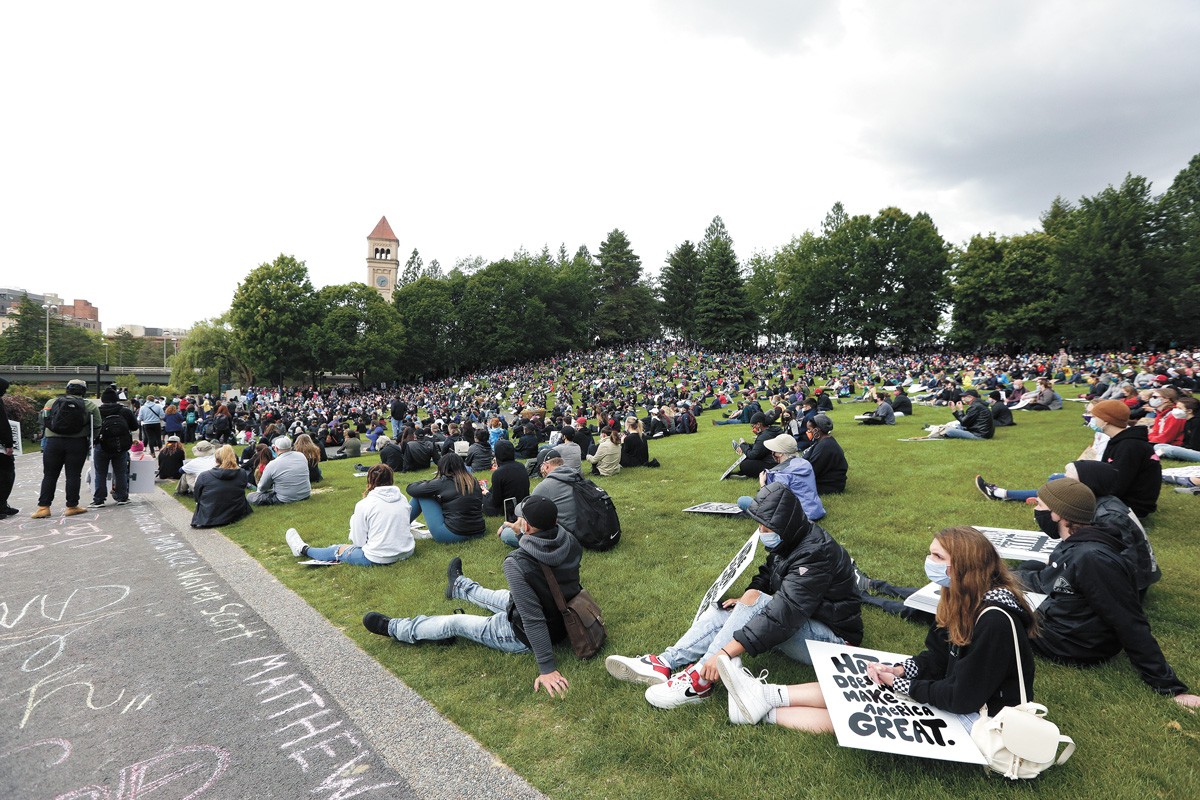 My love for Spokane is vast. Others who share the same sentiment would attest that "Spokane Doesn't Suck." One of my favorite feelings about the second-biggest city in the state is returning home to the inviting skyline while on the I-90 East corridor. The panoramic view is a warm welcoming gateway for many entering the city.

Unfortunately, there is a thin line between the love and the suck. Recently, temperatures dipped into the single digits (the windchill made it feel like minus-15 degrees), and people trying to escape the dangerous conditions are being turned away at shelters. At the same time city leaders discuss policy, human beings are trying to figure out ways to survive frostbite. For years, there's been a dehumanizing narrative around this particular population by people in positions of power. This irresponsible rhetoric influences others to see the unhoused as disposable.

Does someone's humanity cease to exist if they don't have a physical address? If so, this would make sense in finding an excuse to not love thy neighbor. The Rev. Dr. Martin Luther King Jr., a fierce advocate for the poor, testified to the importance of love and its validation that we are more than our labels because this is "the key that unlocks the door to the meaning of ultimate reality."

We are currently witnessing anything but a reality of love; rather, we are living in a world of uncompassionate selfishness in the midst of COVID-19. The infectious disease has taken more than 500 lives in Spokane County alone, and recently surpassed a half-million deaths in the United States. Yet, despite experts earnestly expressing the importance of wearing a mask in public, there are numerous individuals who refuse to join forces in saving lives.

Abstaining from wearing a mask in public doesn't make you a noble patriot; it reveals the cold-hearted insensitivity to those trying to survive a pandemic. Wearing a mask is a display of compassion for the many who have lost a loved one to this deadly disease. It is a courageous act of love because you are willing to dislocate the idea of individuality and convene in the act of community. Author M. Scott Peck asserts "in and through community lies the salvation of the world." We have a responsibility to deliver each other from harm, and there isn't a better time to practice this moral principle than in the middle of a pandemic.

As a whole, there is a moderate willingness to walk alongside the disposed, the underrepresented and the marginalized. For example, in a display of solidarity this past summer, thousands of concerned citizens marched in the heart of the city to stress that Black Lives Matter. However, after a few weeks, the performance fizzled away, leaving behind a residual act of resistance in the name of scattered yard signs. Some chalk up the recent events to progress, but those who live in the shadows of oppression understand Dr. King's salient words: "justice too long delayed is justice denied."

There is an urgent need for us to reexamine our lasting love for Spokane.

There's no denying how powerful and communal the air felt a few months back. As a matter of fact, the words of Dr. Cornel West never rang so true in that justice is what love looks like in public. But the Harvard professor also affirmed that "we have to recognize that there cannot be relationships unless there is commitment, unless there is loyalty, unless there is love."

Since George Floyd was brutally murdered by police back in late May, more than 100 Black, Indigenous and people of color have been killed by cops in the U.S., according to a CBS News report. Our collective cries for justice have flatlined since we last gathered to hold an unjust system accountable.

There is an urgent need for us to reexamine our lasting love for Spokane. Without this undertaking, it will be easier for those who do not have our common interest at heart to keep us divided. This commitment will take courage. It will require rebuilding a faulty foundation that needs to be rooted in a love ethic. Renowned author bell hooks insists that "a culture of domination is anti-love. To choose love is to go against the prevailing values of the culture. Many people feel unable to love either themselves or others because they do not know what love is."

And, to truly understand love is to know and practice radical love. To fully embody a proclivity for social justice is to radically love truth, thy neighbor and even those who wish our community harm. U.S. Congresswoman Ilhan Omar said, "Radical love means we love every single person within our communities to make sure we are providing for them the basic rights as humans; that's what love is."

Our love, for our great city, is boundless, but it isn't invulnerable. To safeguard our community from immorality doesn't require a militarized mentality; rather, when rooted in a radical love ethic, our lives are more harmonious when we are committed to being there for one another. ♦

Edmundo M. Aguilar is an adjunct professor of race and culture studies at Eastern Washington University. He earned his Ph.D. in cultural studies and social thought in education at Washington State University. His work centers on catalyzing systemic social change through documentary film and other media forms in which he critically interrogates identity and oppressive experiences.