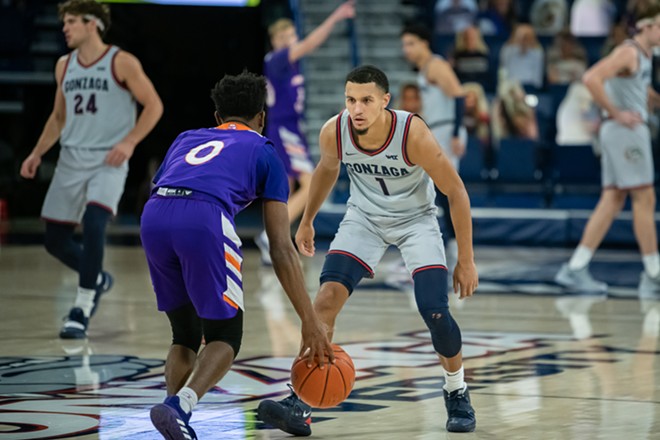 Erick Doxey
Time for the Zags to hunker down and take care of business at the WCC tournament.

Throw the schedule out the window, it’s March. Nobody knows who they’ll play until they win and another team does the same. It’s win or go home time, and for the past few days in Las Vegas, that’s been the case for the teams in the West Coast Conference.

The WCC Tournament has been taking place at Orleans Arena and after three days of games the top-seeded Gonzaga Bulldogs now know who they’ll be taking on in Monday’s semifinal.

That said, the results so far have been as expected based on seeding. The 1 seed Gonzaga will face the 4 seed Saint Mary’s and the 2 seed BYU will take on the 3 seed Pepperdine. The Zags and the Cougars earned byes into the tournament semifinals and they’ll be facing the two teams expected to face them.

Pepperdine knocked off 7 seed Santa Clara, 78-70, in a hard fought game. The Waves are in the semifinals after beating a Santa Clara squad that survived a tough challenge from 10 seed Portland in the opening round and then upset 6 seed Pacific in the second. Gonzaga, meanwhile, gets Saint Mary’s, which dispatched a depleted 5 seed in Loyola Marymount in a controversial game. The Gaels were the 4 seed, despite having three fewer wins in league than the Lions.

Because of the unbalanced nature of this pandemic season, Saint Mary’s was awarded the higher seed. They didn’t have to play before facing the Lions. And they won, but the Lions were shorthanded, and playing their second game in as many days while Saint Mary’s came off of a week’s rest. Saint Mary’s won, and the Gaels advanced.

In that regard, it’s business as usual in the WCC Tournament. But it’s not.

Saint Mary’s is really bad. They’re worse than they’ve been in a decade-and-a-half. Gonzaga won the two head-to-head meetings this season by an average of 18 points. Sure, they’re arch-rivals. And sure, Monday’s semifinal meeting will be hyped up by ESPN as yet another March meeting between two of the West’s best programs. But this year, it’s far from it.

Gonzaga had four players named first-team all-WCC this season. Saint Mary’s had none, and only one player, Logan Johnson, earned second team honors. The Gaels are, for all intents and purposes, a road block and nothing more. They’re a speedbump on the Zags’ run into March Madness.

But they thrive in that role. While BYU may be the team most qualified, most deserving to pick up a win in Vegas, it’s the Gaels that have historically shown the ability to actually accomplish it. Even when they shouldn’t. They normally face off with the Zags in the league title game. This year, they’ll do so in the semis. Gonzaga has made the WCC Tournament final in every season since 1998, that’s 23 consecutive years. Of those 23 years they’ve won it 17 times. Saint Mary’s is responsible for half of those losses. But this isn’t the final, it’s the semifinal, and Gonzaga’s better than it’s ever been. Meanwhile, Saint Mary’s is as bad as it’s ever been in that stretch.

The Gaels had to fight past a shorthanded Loyola Marymount team that just last week played a hard-fought game in The Kennel, just to be here.

Monday’s game will feature two of the West’s premier programs. It will be a rivalry game between a mid-major that has elevated itself to elite status nationally and a mid-major trying to follow suit. But it will also be between a program that’s elite and one that isn’t, and also happens to be rebuilding. Gonzaga will face its rival on the biggest stage of the season for Saint Mary’s, but for Gonzaga, it will be nothing more than a stepping stone on the path to the title it is truly hunting for.

Monday will provide Gonzaga with the first real March setting the team has seen this season, but it shouldn’t be much of a problem. It’s March, and the loser goes home, which means Gonzaga needs to dispatch the Gaels and live to play another day. Nothing more.

At Orleans Arena in Las Vegas the top-seeded Zags will face the 4-seed Saint Mary’s Gaels in the WCC Tournament semifinal at 6 p.m. on ESPN. With a win the Zags will advance to play the winner of Monday night’s game between 2-seed BYU vs. 3-seed Pepperdine on Tuesday at 6 p.m. on ESPN.