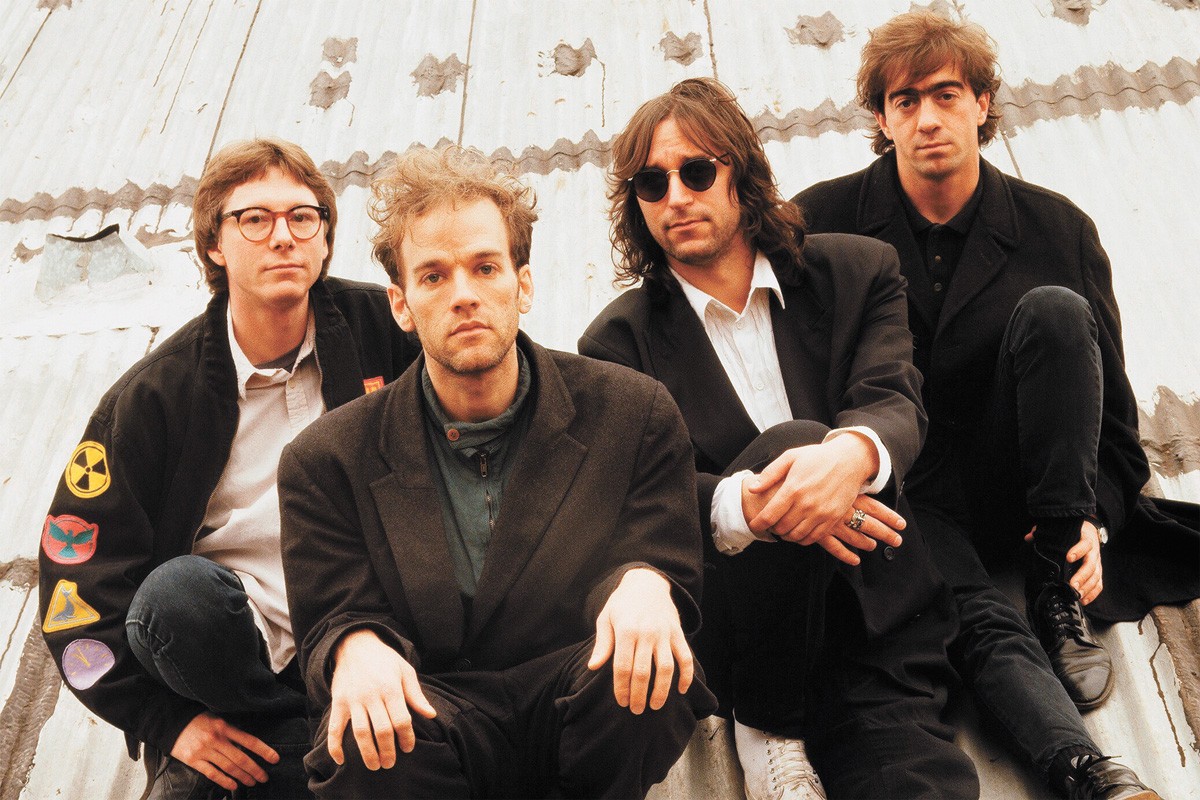 It's not often that a band's most commercially successful album bisects a career as cleanly as R.E.M.'s Out of Time does.

That monster release, celebrating its 30th anniversary this week, took an emphatically indie band that had slowly worked its way up to becoming arena-sized rock stars and made them a full-blown global phenomenon.

Out of Time sold more than 18 million copies worldwide and became R.E.M.'s first No. 1 album in America, selling more than 4 million copies in the states. It won three Grammys, the single "Losing My Religion" became an iconic MTV and radio staple (and soundtracked the epic Brenda/Dylan breakup on Beverly Hills 90210), and even landed the band on Sesame Street, where they turned the obnoxiously buoyant single "Shiny Happy People" into "Furry Happy Monsters."

Out of Time's popularity could be seen as a natural next step for a band that had been on a constant upward trajectory both creatively and commercially since their brilliant 1983 debut Murmur. In the context of the time, though, R.E.M.'s bum rush of the pop music spotlight was a little jarring. That's especially true for the megafans who'd been worshipping at their jangle-rock altar from the time the quartet stumbled out of Athens, Georgia, with a sound unlike anything else going on at the time.

In fact, Out of Time was the beginning of the end of one of America's greatest-ever rock bands, sales figures be damned.

If a band was actively trying to alienate its reverential fan base, they couldn't do better than R.E.M.'s activities around Out of Time.

Start with the timing of the thing. After releasing an album every year between 1983 and 1988 — an unparalleled run that includes Murmur, Reckoning, Fables of the Reconstruction, Lifes Rich Pageant, Document and Green — they dared take a three-year pause. Certainly they'd earned it after packing arenas on the tour for Green, their first album after jumping to Warner Bros. from I.R.S. Records, but you rarely hear of a label letting a band cool off that long when they're at their commercial peak. For fans, that pause seemed endless.

THE FIVE R.E.M. ALBUMS
EVERYONE SHOULD OWN

Then look at what the band delivered when they did return. Gone were the chiming Rickenbacker guitars from Peter Buck and much of the driving rhythms of bassist Mike Mills and drummer Bill Berry. The sound had taken a decidedly acoustic turn, prominently featuring Buck's new interest in mandolin. And singer Michael Stipe was suddenly penning love songs in place of the political polemics and murky, impressionistic word jumbles of their previous albums. Out of Time opens with "Radio Song," a catchy-enough tune, but when rapper KRS-One jumps in to trade verses with Stipe, you know the band isn't concerned with what old fans think. They are emphatically following their muse.

Clearly, it worked for a lot of people. While the 1991 album charts were filled with really loud bands like Nirvana, Soundgarden and Guns 'n' Roses, the softer brand of R.E.M. was right there with them. Hell, they didn't even tour in support of the Out of Time (another off-putting move for old fans), instead moving right on to write and record their next album, Automatic for the People. They didn't tour for that one, either.

Listening to Out of Time now, it's pretty packed with great songs ("Near Wild Heaven," "Country Feedback" and "Me in Honey"). And given what would follow in the band's sonic journey — the muted approach on 1992's Automatic and 1996's New Adventures in Hi-Fi, the electronics and chamber-pop that crept in after drummer Berry left the band in 1997 — the sounds embraced by the band on Out of Time are certainly less jarring in retrospect.

For legions of hardcore R.E.M. fans who grew up in the '80s, though, it's difficult to hear Out of Time without considering it the beginning of the end. Some of that can be attributed to bitter fans who didn't want to share their band with a bigger audience. I didn't feel that way when R.E.M. went to the big record label or played arenas; in fact, I cheered their growing popularity at every step until Out of Time. But the mainstream's embrace of the band 10 years into their existence ultimately pushed me away for their next 20.

I know I'm not alone. The band's record sales suggest as much, because they steadily declined after Out of Time (although both Automatic and 1994's glam-rock Monster went multiplatinum). They still had some huge successes, creatively and commercially, but especially after Berry left the band, they struggled to stay relevant. Even the band members admit to being bored making 2004's Around the Sun album, something anyone who's heard it can definitely relate to.

Thankfully, though, R.E.M. had a creative renaissance on their last couple of albums; both 2008's Accelerate and 2011's Collapse Into Now (celebrating its 10th anniversary this week) captured some of the energy of the band's early days with the boundary-pushing approaches of some of their latter work.

The band broke up six months after Collapse Into Now, and the album warrants a listen if you haven't in a while, or if you've never heard it at all. Like the best R.E.M. albums, it touches on all the band's influences, from punky rave-ups to delicate ballads, on songs like "Discoverer," "Mine Smell Like Honey" and "Blue."

And for the folks who regard Out of Time as the band's peak, there's plenty of mandolin to go around, too. ♦