We Are Not Pussy Riot

Where are Spokane’s hooligans? 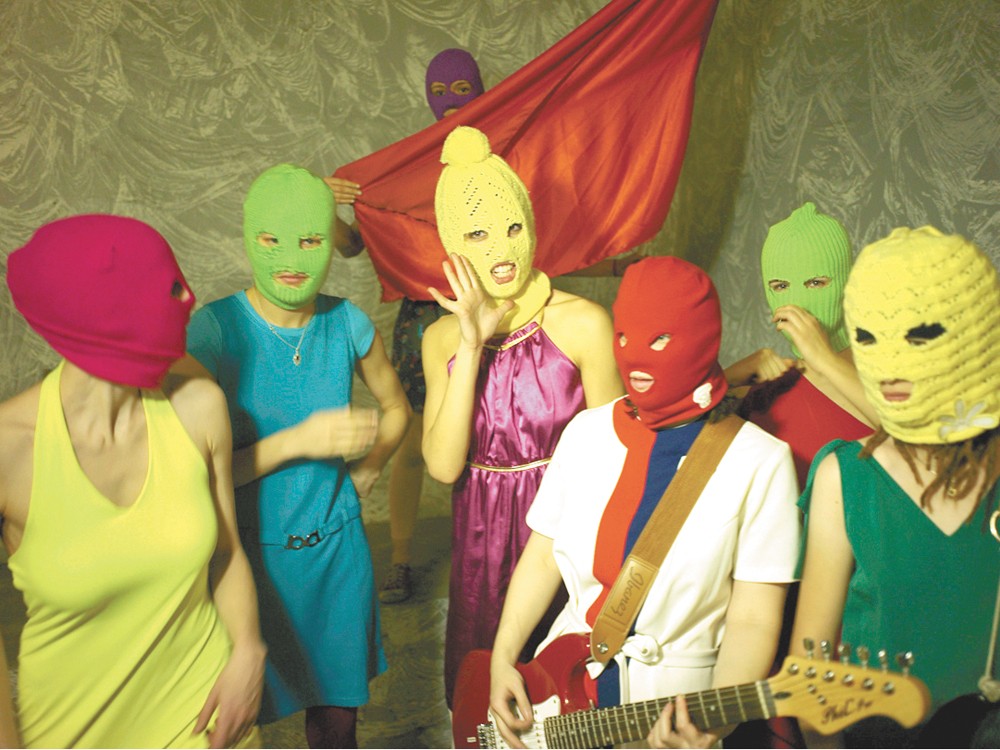 Pussy Riot, in its signature balaclavas
With a stable of trigger-happy cops, conservatism running hot in the veins of its voters and glaring, undeniable poverty in every corner of the city, Spokane is a dissenter’s buffet. It’s a city rife with corruption, violence, injustice and racism. And that makes Spokane the perfect place for protesters and naysayers to wave their signs, to mock its leaders, to protest, to demonstrate, to demand change.

And that also makes it a perfect place for punk rock: music built to swim against the current and poke fun at the people in suits and ties. Punk rock has a long history of criticizing what no other artistic medium will. In 1979, Joe Strummer famously tackled nuclear accidents, Britain’s rising unemployment, racial issues and drug woes in the Clash’s most known song, “London Calling.” Jello Biafra lampooned America’s youth for its numbness to the violent reality of the rest of the world in the Dead Kennedys song “Holiday in Cambodia,” in 1980. A year later, Black Flag put its foot down, refusing to be controlled by authority in “Rise Above.”

But, strangely, it seems that Spokane — a city brimming with social unrest — seems to have lost its punks.

When Otto Zehm was beaten to death by a Spokane police officer, or when Pastor Wayne Scott Creach was shot by a cop on his own property — where were the musical zealots? When a bomb was planted downtown during the Martin Luther King, Jr. parade, where were our punks to strike back? Or when the Spokane City Council banned panhandling from local freeway off-ramps — a slap to the faces of Spokane’s poorest and most desperate populations — where were the punks to dissent, to call names, to rally youth, to get people pissed off and bring about change?

Spokane punks could learn from a band halfway around the world that’s doing just that: protesting the corruption that they can no longer stand by and simply watch. And they’re paying the price for it.

Last week, three members of Pussy Riot — a Russian punk collective which has dominated global headlines after being arrested for performing an anti-Vladmir Putin song in a Russian Orthodox cathedral — became acclimated to the prison cells they’ll call home for the next two years. They are there for performing a single minute of a “punk prayer” called “Virgin Mary, Put Putin Away.” Performing it wasn’t just a risk. The song — a feminist condemnation of the lack of separation of church and state in Russia, and which protests Putin in not the nicest of language — was a surefire way to get the themselves caught in a shitstorm.

And it did: the three women were convicted for “hooliganism motivated by religious hatred or hostility.”

It sounds like a crime against religion — precisely proving Pussy Riot’s point. The separation of church and state in Russia seems to be a farce, with the strings that control the Kremlin being tugged by Russian Orthodox leaders. Guys like Father Vsevolod Chaplin: a conservative fundamentalist who has said women who wear provocative clothing can incite rape and, thusly, tried to enforce a dress code for Russian women. Even Putin himself has called the church/state separation “primitive.”

Knowing this, the women in Pussy Riot wrote a song that would undoubtedly get them arrested. They dressed provocatively, pulled colorful balaclavas over their faces, ran into a prominent cathedral and screamed “Shit, shit, the Lord’s shit!” over screeching guitars. They were damned from the moment they walked into the church — even they probably knew that.

But they did it anyway: because punk rock is about protest. It’s about taking a stand when no one else will. It’s about being willing to pay the price for what you believe.

So I ask you — not just the punks of Spokane, but anyone who is pissed off by what happens here — where are you? Why aren’t you making your voice heard?

What are you waiting for?