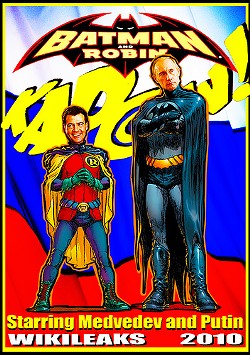 If there's one important takeaway from the Wikileaks debacle, it's that experienced diplomats use comic book references, just like the rest of us.

In leaked diplomat cables quoted repeatedly in the Russian press, Russian President Dmitri Medvedev was called "Robin" to Prime Minister Vladimir Putin's "Batman." (In this scenario, presumably, Mikhail Gorbachev is Aquaman, Nicolas Sarkozy is Catwoman, and Dick Cheney is, as always, the Penguin.)

In a recent New York Times news blog update on the topic, they illustrated the concept with a brightly-colored picture that's unmistakably the work of  "Gerik Asher," the pseudonym for Spokane artists Cain and Todd Benson.

(And yes, Todd knows that he misspelled "starring." He fixed it, though the NYT has not updated the picture.)

In Spokane, Benson's probably best known for his graffiti work depicting a young girl hanging her sock on a mural of Obama and McCain.

Benson's work landed on the New York Times site after Benson e-mailed a copy to the blog. For Benson, it's a common practice: Whip up some artwork about a pop cultural event — whether it's Google leaving China or Lindsay Lohan getting arrested — and e-mail it to some websites, in hopes of being published.

The web, after all, can make for a well-attended art gallery.

In many cases, his plan has worked. His middle-finger-to-China picture has garned more than 10,000 hits to his Flickr sites thanks to usage on sites like technologum. His Obama-as-Uncle-Sam picture was used to illustrate a post on change.org about Arizona's Immigration reform on change.org.

"It's basically caveman art," Benson says. "I’m just trying to talk about the times I live in." One day, Benson hopes, he'll be 80 years old and be able to look back on decades and decades of his own art work, illustrating the important — and unimportant — pop-cultural and political events that surrounded him and his brother.