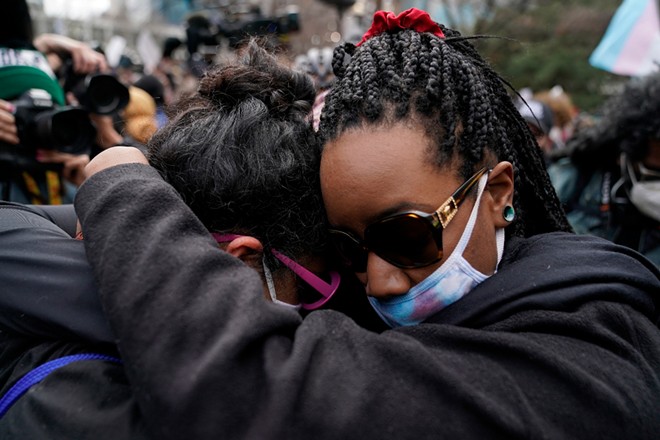 Amr Alfiky/The New York Times
People hug outside the Hennepin Country Government Center in Minneapolis on Tuesday, April 20, 2021, after the jury delivered three guilty verdicts in the Derek Chauvin trial. Chauvin, a former Minneapolis police officer was charged in the death of George Floyd while in police custody last year.

Derek Chauvin was found guilty of two counts of murder on Tuesday in the death of George Floyd, whose final breaths last May under the knee of Chauvin, a former Minneapolis police officer, were captured on video, setting off months of protests against the police abuse of Black people.

After deliberating for about 10 hours over two days following an emotional trial that lasted three weeks, the jury found Chauvin, who is white, guilty of second-degree murder, third-degree murder and second-degree manslaughter for the killing of Floyd, a Black man, on a street corner last year on Memorial Day.

Chauvin faces up to 40 years in prison when he is sentenced in the coming weeks but is likely to receive far less time. The presumptive sentence for second-degree murder is 12.5 years, according to Minnesota’s sentencing guidelines, although the state has asked for a higher sentence.

The verdict was read in court and broadcast live to the nation on television, as the streets around the heavily fortified courthouse in downtown Minneapolis, ringed by razor wire and guarded by National Guard soldiers, filled with people awaiting the verdict.

For a country whose legal system rarely holds police officers to account for killing on the job, especially when the victims are Black people, the case was a milestone and its outcome a sign, perhaps, that the death of Floyd has moved the country toward more accountability for police abuses and more equality under the law.

The city has been on edge for weeks as the trial progressed and the city awaited the verdict, with many worrying that a not-guilty ruling would bring renewed social unrest and chaos to a city that saw buildings set ablaze and widespread looting last year following the death of Floyd.

After the verdict was read, Judge Peter A. Cahill ordered that Chauvin, who has been free on bail since last fall, be immediately taken into custody by sheriff’s deputies. Chauvin was taken out of the courtroom in handcuffs and will be sentenced in eight weeks following the completion of a pre-sentencing report about his background.

Cahill will determine if there are aggravating factors that justify a higher sentence than usual. Among the aggravating factors in the crime, the prosecution has argued in court filings, were the presence of children on the scene when Floyd was killed, that Floyd was treated with “particular cruelty” by Chauvin, and that Chauvin, as a police officer, “abused his position of authority.”
click to enlarge