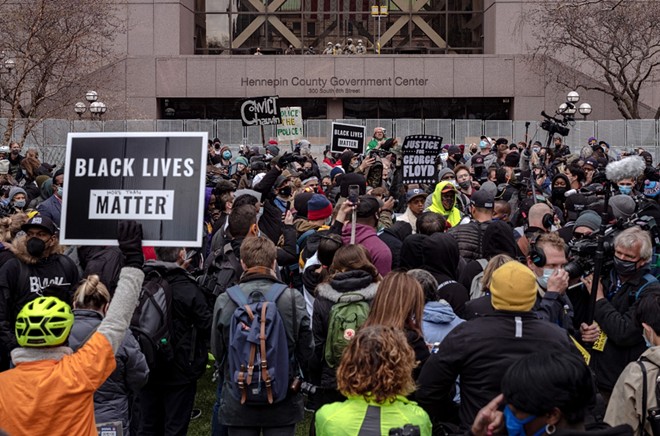 So many people are expressing relief at the verdict in the Derek Chauvin trial, marking it as a historic moment, a collective exhale. President Biden told George Floyd’s daughter, “Your daddy did change the world.” He wasn’t being hyperbolic.

But let’s be clear, this wasn’t justice. Derek Chauvin wasn’t one “bad apple” — not a rogue actor. The whole tree is rotten, producing “a strange and bitter crop.” American policing is founded in colonial and racial oppression, as are all our institutions.

Black people are talking about how hard it was to watch the trial, how retraumatizing it was to watch the murder video over and over. We saw that in the press conference with George Floyd’s family after the verdict. I can’t imagine how they are feeling, but I can listen to what they are saying. “We have to keep marching… keep fighting. Justice for George means freedom for all.”

White people, we may share in the relief, but this trial (like this pandemic) has only made the depth of American White supremacy that much more apparent. As Minnesota Attorney General Ellison said, this conviction might be accountability, but it isn’t justice. It’s being called a step, a start, a potential new beginning, but with so much more work to be done.

Even as people responding to the verdict held up Daunte Wright’s fatal shooting only 10 miles from the Chauvin trail, we were learning about Ma’Khia Bryant. She was a 16-year-old in Columbus, Ohio, who called police, only to be shot and killed by them just before the Chauvin verdict was announced. Hers is another name we need to say, another life that should have mattered.

White people, the onus is on us. White supremacy is a White people problem. “We cannot turn away.” If we’re ever going to stop the violence, eradicate systemic racism, we have to learn from this moment. Whatever we think we’re doing, we need to do more.

I want to encourage us to stop, to really listen, to not turn away, to directly confront the violence and trauma of White supremacy. Our neighbors are imploring us to recognize their humanity, to help remove the crushing weight of systemic oppression. Only then can we all breathe free. ♦

Judy Rohrer is a scholar-activist and has written previously about whiteness, racial politics, and settler colonialism for both academic and popular audiences.  She is currently the Director of Women’s & Gender Studies at Eastern Washington University.  For more, visit judyrohrer.mystrikingly.com.