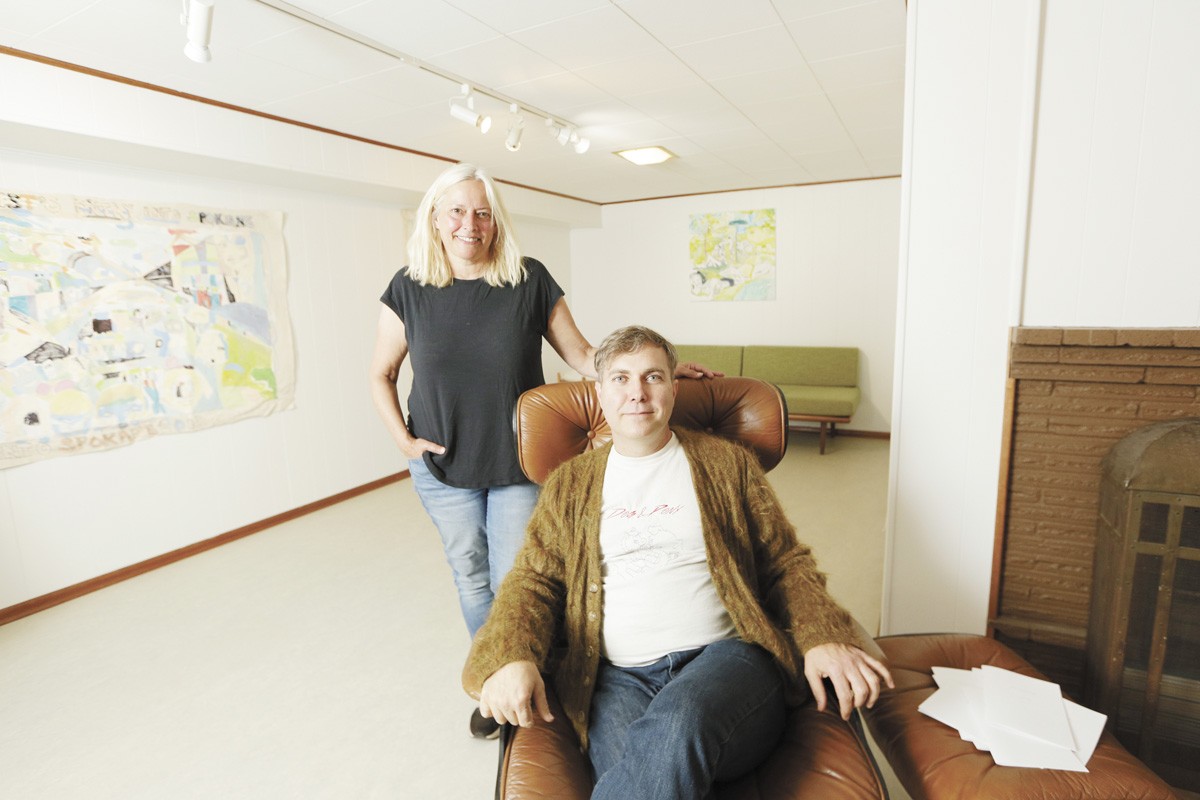 Art enthusiasts have all seen the traditional curated exhibition and, yes, it never disappoints an artsy eye. But what happens when a writer, a fashion designer and an artist walk into an exhibition ­— or, in this case, a bar?

Dog & Pony, a new private South Hill exhibition space, is currently home to a show called A Writer, a Fashion Designer, and an Artist Walk into a Bar... Its first exhibition showcases the writing of Annisa Hale, fashion by Sav Filson and paintings by Hannah Koeske. Each contributing artist resides and works within the Spokane community.

A Writer, a Fashion Designer, and an Artist Walk into a Bar... was inspired by the idea of intertwining the classic bar joke and a group exhibition. Kim Deater, exhibition curator and Spokane local, was driven to create a show that challenges the "fine art" norm and displays a fusion of literature, fashion and painting where all art forms are seen as equal.

"We're coming at this from all different angles," says Christopher Russell, artist and founder of Dog & Pony. "It's a multiplicity of viewpoints that draws from all over."

Kickstarting Dog & Pony from his South Hill home has been a running idea for years. Russell says in larger cities, like Los Angeles, New York City and San Francisco, it is common for artists to open up gallery space within their homes to share art with their community. In many cases, such opportunities have led to the discovery of lesser known artists and their creative works.

"Christopher is trying to create an interface between artists from different areas with the artists that are here [in Spokane] and make a dialogue back and forth, where people on the national scene can appreciate and find out about these local artists," Deater says. "This is huge for Spokane."

Hale is a writer, poet and photographer who channels "showing versus telling" as a creator. Her work focuses on an approach to writing that incorporates raw, sensory imagery. Her writing is displayed near a reclining chair for viewers to relax and enjoy, and also hung on the gallery wall to emphasize that all three forms in the show — writing, fashion and painting — are equal creative works.

Koeske's paintings are inspired by her vision of capturing the relationship of humans to their surroundings. Many of the figures seen in her paintings are personal friends and acquaintances. Koeske enjoys hearing them share their personal journeys and present thoughts with her as she creates.

Koeske says that her paintings showcased in A Writer, a Fashion Designer, and an Artist Walk into a Bar... are a combination of paintings that she has recently completed and others that she has been refining over time. She often revisits former works with a different medium, like Sharpie or ballpoint pen, to add a new element to the surface of the paintings. Most of her paintings incorporate faces or bodies in relation to public spaces, like parks, pools or train stations; are multicolored; and include abstracted elements of the environments that she paints. 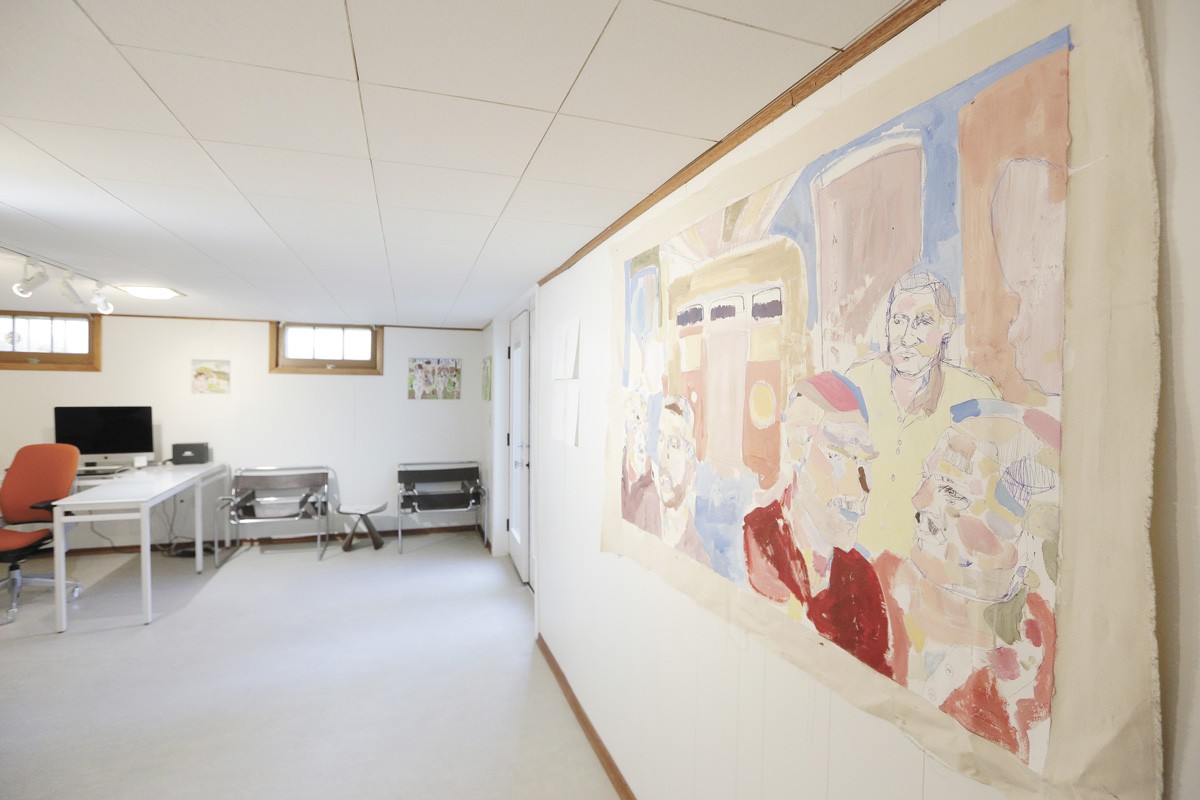 Sav Filson is a fashion designer who works professionally simply under the name Sav. Their clothing line EVERYBODY challenges the gender binary by designing genderless garments. Their clothing installation in the Dog & Pony exhibition — also inspired by genderless fashion — was created with a light, transparent silk organza fabric that acts in a symbolic manner, demonstrating gender fluidity and representation of all people drawn to its beauty.

"I wanted to create something that takes elements from both menswear and womenswear, but make something that is its own thing — a piece that is not created for who is wearing it but that is beautiful just because it is," says Sav.

Typically, art exhibitions are preplanned and criteria-based for artists creating their work. What makes Dog & Pony's opening exhibition so unique is that both Russell's advising and Deater's curatorial approach gave free rein to the artists.

"I think that often people think of artists by them providing a service, like coffee where you can order with or without cream. Therefore, [they] can dictate the rules," says Russell. "But when art is really art, it comes from freedom of the artists doing what they feel they need to do and then sorting it out later. It's just a situation where freedom reigns."

Hale, Koeske and Sav began with a plan to incorporate elements of one another's creative processes to establish a distinct relationship between their art. Eventually they decided A Writer, a Fashion Designer, and an Artist Walk into a Bar... would be most impactful by bringing the pieces together in a way that embraces its divergent and unique nature.

"I think it is the nature of the show and the bar joke combined," says Sav. "It has these three elements that are so different that are not trying to be the same. It's an opportunity to put them all together, invite people to draw comparisons and have a conversation about them, and naturally see what comes out of it."

After showing A Writer, a Fashion Designer, and an Artist Walk into a Bar... Dog & Pony will present its second exhibition Empire Down on July 11. Robert Yoder, who will curate, aims to incorporate the local community with Seattle-based artists. The first season will close with a pair of concurrent exhibitions examining the facets of bodily autonomy. My Body, My Choice, opening September 19, will be curated by the Association of Hysteric Curators (AHC) and will feature artists such as Andrea Bowers and Eliza Blow. In a solo exhibition, portraits by photographer June T. Sanders will be displayed.

"I don't want this to be art with a capital A, I just want creativity in Spokane," Russell says. "It's a place where people can get together, chat, grab a Bubly Sparkling Water and share some stories — one more space to create community around art here in Spokane." ♦

A Writer, a Fashion Designer, and an Artist Walk into a Bar... • Open through June 26 • Tickets and address available by appointment; email DogAndPonyShow@ChristopherRussell.Art.