Ask Dr. Matt: How do I make my child behave? 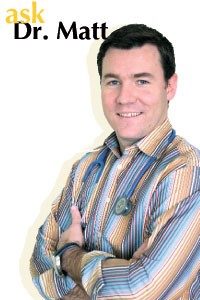 Q. What can I do to make my child behave? I am at my wit’s end trying to encourage, punish, and cajole my way to a well-behaved kid. Help!

A. Let’s take a foray into applied psychology to try to figure out why our kids seem to so avidly do the opposite of what we want them to, particularly when it comes to eating, sleeping, pooping and playing. The principles to focus on are reinforcement, punishment and extinction. Simply put, reinforcement is an influence that makes a behavior more likely to occur. Call it positive reinforcement if you add an element to fuel a behavior, for example giving some candy if a child brushes their teeth. (I have actually heard of this one.) Call it negative reinforcement if you remove or undo an element to fuel a behavior, for example taking away the obligation of a chore if a child will read a book instead.

Finally, there is the principle of extinction, perhaps the most powerful of all principles when it comes to kids. Like punishment, extinction makes a behavior less likely to occur by essentially contributing to the boringness of a behavior, or the lack of response and attention to the occurrence of behavior. You can also give a problem object a time out — “OK, if you guys can’t stop shooting each other, we are going to put away the blow-dart guns.”

When it comes to reinforcing behavior, rewards (a type of reinforcement) need to be timely and meaningful — promising kids an extra deposit to their 529 college fund is neither. But you also have to pick something that they won’t be saturated with too quickly — even chocolate cake can get old, if they are offered a piece for each time they sit on the toilet. Instead, try stickers that add up to a piece of cake.

The grocery store aisle is many kids’ favorite place to test your limits. There’s a lot of stuff they’ve seen on TV, and now here it is, right at eye level! Add to that the fact that many children are fueled by attention — yours or others’ — regardless of whether it is happy attention or angry attention, and you have the ingredients for a battle royal. Keep in mind that their behavior will be fueled if you succumb to every request, no matter how angry and frustrated you act while you do it. On the other hand, if you argue and negotiate and battle it out over Pop-Tarts, the heat of your attention reinforces that tantrum behavior. So to extinguish this behavior, remove the heat by being calm, cool and clear as you sail on down the aisle. Make like the White House, and tell them, “We don’t negotiate with terrorists; we put them out of business.” Sure you could spank their bottoms in the middle of the aisle, but the message that sends to your child isn’t too healthy — “Do what I say or it’s going to hurt!” And you shouldn’t like the message that it sends to you — “I train my children the same way I train a dog or pigeon: if you don’t do what I say, I am going to hurt you!”

Finally, if you must use punishment, don’t make any promises you aren’t able and willing to keep: “For the eighth time, if you don’t stop nagging me, we will walk right out of this store!” Don’t threaten to leave the store unless you will walk out then and there. Empty threats seem to fuel misbehavior in kids.