Inversion therapy promises relief from back pain and high-intensity exercise. Does it deliver? 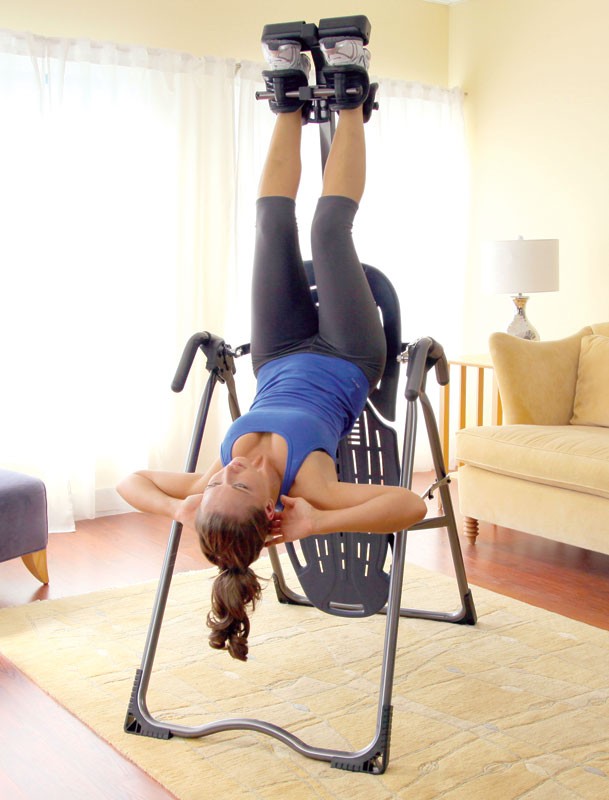 Like death and taxes, gravity is inevitable. Its relentless pull may be taking a toll on your muscles and joints. But what if its effects were reversed and instead of pulling you down, it pulled you up?

That’s the logic behind inversion therapy — or inversion exercise, since it’s not always a therapeutic application. By simply rotating the body from its normal feet-on-the-ground disposition, proponents of inversion equipment say you begin to regain flexibility, reduce spine-related pain such as sciatica and, if you work at it, develop killer abs.

“The purpose of an inversion table is to traction the spine, or, in other words, to pull it apart,” says Michael Williams, a chiropractor at Spokane Back and Neck Clinic. “The theory is that by inverting ourselves we can create a vacuum effect that will suck water back into the disc, reduce disc bulging, stretch the ligaments, muscles and tendons and make us feel better,” says Williams, who notes he does not personally use and does not prescribe the use of inversion therapy for his patients.

“I’d say 85 to 90 percent of the users [of inversion equipment] are people with some type of back pain, hip pain, a bulged disc, a flare-up with sciatica, that type of thing,” says Scott Loughron, a spokesman for Puyallup-based Teeter Hang Ups, a company that manufactures inversion equipment.

Enthusiastic anecdotal reports tout improved spine and muscle function and claim inversion may improve mental agility, reduce depression and offer pain relief. But research hasn’t yet born out those claims, and both the Mayo Clinic and the Berkeley Wellness newsletter caution against inversion. Being upside down seems to increase pressure in the eyeballs, making it a bad idea if you’ve got glaucoma, and by increasing blood pressure, it poses a problem if you have cardiac issues.

Loughron says the inversion table adds a new dimension of difficulty to common exercises like crunches. “When you do one inverted sit up, that counts for 10 regular ones,” he contends. By hanging upside down and doing “squats,” the gluteal and hamstring muscles get a workout they wouldn’t when the exercise is done upright. Stretching also takes on a new dimension when hanging upside down — touching your toes becomes an ab exercise as well as a hamstring stretch.

There may not be a better example of inversion equipment’s becoming more common than the fact that Costco now sells the stuff. Ads feature company founder Roger Teeter literally jumping up and down to show how his equipment has kept his 70-years-old-plus body in shape.

From the retro, bar-and-boots of American Gigolo fame to tables that allow users to vary the degrees of inversion, to chairs that make the whole thing more comfortable, equipment to turn you headover- heels is available at lots of price points, in stores and online.

“It’s the world’s best piece [of equipment],” says Jim McKee, owner of Better Body Fitness Super Store in Spokane, despite the fact that his store is also filled with state-of-the-art elliptical trainers and resistance-exercise systems. “Absolutely the best piece of exercise equipment out there. The problem is, hardly anybody knows how to use it,” he says with a laugh.

Indeed, Teeter’s Loughron says there is something of a learning curve for new users, and he cautions that just buying a pair of gravity boots and trying to hang upside down is not the wisest way to go for beginners.

“The bar and boots is tough … potentially unsafe for someone just starting out,” says Loughron. “I tell people to try a table and to follow all the instructions. Start out at 20 degrees and after a couple of days, if your body says, ‘I want a little more,’ go to 45 degrees. It might be two to three weeks before you’re fully inverted.”