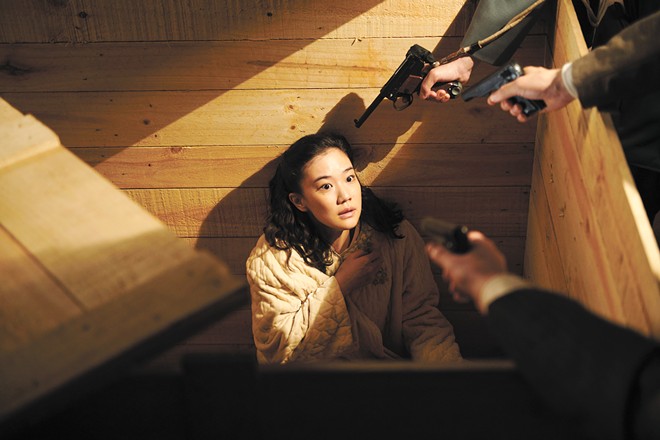 Prolific Japanese filmmaker Kiyoshi Kurosawa is still best known in the U.S. for his horror films, including Pulse, Cure and Creepy, but he's worked in numerous genres over his lengthy career. Kurosawa's latest film, Wife of a Spy, is his first period piece, a measured and sometimes staid drama set on the eve of Japan's entry into World War II. It unfolds slowly and methodically, eventually building to a powerful and unexpected climax. The film's early going requires some patience, but that pays off in surprising ways as the story unfolds.

Wife of a Spy opens in early 1940, as the Japanese government is imposing greater restrictions on its population. That's a challenge for Yusaku Fukuhara (Issey Takahashi), who runs a successful import-export business and is now being cut off from most of his foreign clients. In the first scene, one of Yusaku's British associates is arrested on suspicion of espionage, and while that man is eventually released, it's clear that Yusaku's interests are increasingly at odds with the government's. He tries to hide these concerns from his wife, Satoko (Yu Aoi), but she picks up on his unease, especially after he returns from what he claims is a business trip to Manchuria.

Wife of a Spy plays out a bit like a soap opera in its first half, as Satoko's concerns initially focus on her suspicion that her husband is having an affair, and the distance that's grown between them in their marriage. Satoko herself flirts with her childhood friend Taiji Tsumori (Masahiro Higashide), who's now a commander in the Japanese military police. Satoko soon learns that Yusaku and his nephew Fumio (Ryota Bando) witnessed terrible atrocities committed by the Japanese military in Manchuria, and are attempting to smuggle evidence of those crimes out of the country to share with the international community.

Yusaku isn't really a spy, since he's not working for any kind of organized group. He's a previously complacent citizen moved to act by a sense of moral outrage, and once Satoko joins him in that awakening, the story picks up accordingly. Despite Kurosawa's background in genre films, he doesn't structure Wife of a Spy as a thriller, and the moments of suspense are minimal.

Instead, this is a story about a woman who attempts to assert her own identity as she questions everything she thought she knew about her life. Even as Satoko eagerly participates in her husband's efforts, she's still always a step behind both him and Taiji. No matter how proactive she becomes, she can never be considered anything more than the wife of a spy.

Originally produced for Japanese TV, Wife of a Spy sometimes resembles a soap opera visually as well as narratively, shot on flat digital video mostly in static, stagebound locations. The frequent soft-focus shots and overexposed backgrounds (windows often look out into bright nothingness) give the melodrama a sense of artificiality that can seem at odds with the historical material, but also emphasizes the surreal situation that Satoko has found herself in.

Even when the movie seems to be struggling to find its purpose, Aoi is always compelling to watch as Satoko, a woman who's lived a life of privilege at the expense of her own autonomy. The movie's extended epilogue is a heartbreaking depiction of both her inner strength and her expendability. Yusaku is an amateur filmmaker, and in happier times he creates short noir-style films for his wife to star in. She's deliberately play-acting in those movies, but she's always being called upon to play a part — by her husband, by her country — whether willingly or not. ♦

WIFE OF A SPY