The evening before was its own sort of awful. There were dreams of going down the hill far too fast, into nothingness, no way of stopping. I tossed and turned; my mind unable to shut down. I was going skiing the next morning for the first time. Somewhere around 1 am I decided it was the worst decision of the New Year.

The next morning, my alarm clock rang loudly at some ungodly hour and I reluctantly got up to prepare for the day ahead. I was doing this, no matter what. Not only had I already purchased a ski lesson, but I was the stupid person who pitched the story to write about that experience in the first place. It was my fault.

From the beginning I wanted to go alone. No pressure from friends and loved ones to laugh when my non-athletic ass fell hard — just my own inner monologue to combat the fear. And I guess that was it; that was why it took 26 years to get me on skis, because I was scared of failure, of looking stupid.

My mother always tells the story of the week she tried skiing. "The only part of my body that didn't hurt was when I opened my eyelids," she'd often recall. So why did I need to be a part of an activity that left a person battered and most likely freezing? I wasn't missing out on anything, I used to think. But since my fateful move to Spokane from the flatlands of Iowa six months ago, I was reminded constantly by locals and friends who had only vaguely heard of the Inland Northwest that, "Oh, the skiing in the area is great."

If I was going to learn, now was the time.

There it was. Through some early fog and snow-laced pine trees, I made it to Mt. Spokane Ski and Snowboard Park. Naturally, so did everyone else that sunny Saturday morning. The park's website stipulates arriving one hour early. On a gorgeous day I should have known to get there even earlier. Even though I thought I left in plenty of time, after parking, cavorting on the shuttle and waiting in various lines, I was too late to take the 10:30 am class. So 1 pm was the one for me. I had made it all the way up there; I wasn't giving up now. Biding my time in the balmy lodge, my nerves built steadily.

Finally, after a quick stop at the rental office, the time came for the class to begin. Meeting at the base of the mountain, I discovered that, unlike the jam-packed morning class I had missed, there were only two other students. It was almost like a private lesson.

To begin, my classmates and I were asked to click our boots into our skis. I hoped no one noticed my legs involuntarily shaking, and not from the cold. I asked the ski instructor if it was OK to cry. He said he usually didn't cry, but I wouldn't be the first person to do so in his class.

In my imagination the "bunny hill" was a small mound of snow built up in the parking lot where they put the first-timers so they couldn't hurt anyone. In reality, it was seemingly halfway up the mountain. I gulped looking up. Was that at least a mile up? I thought so. 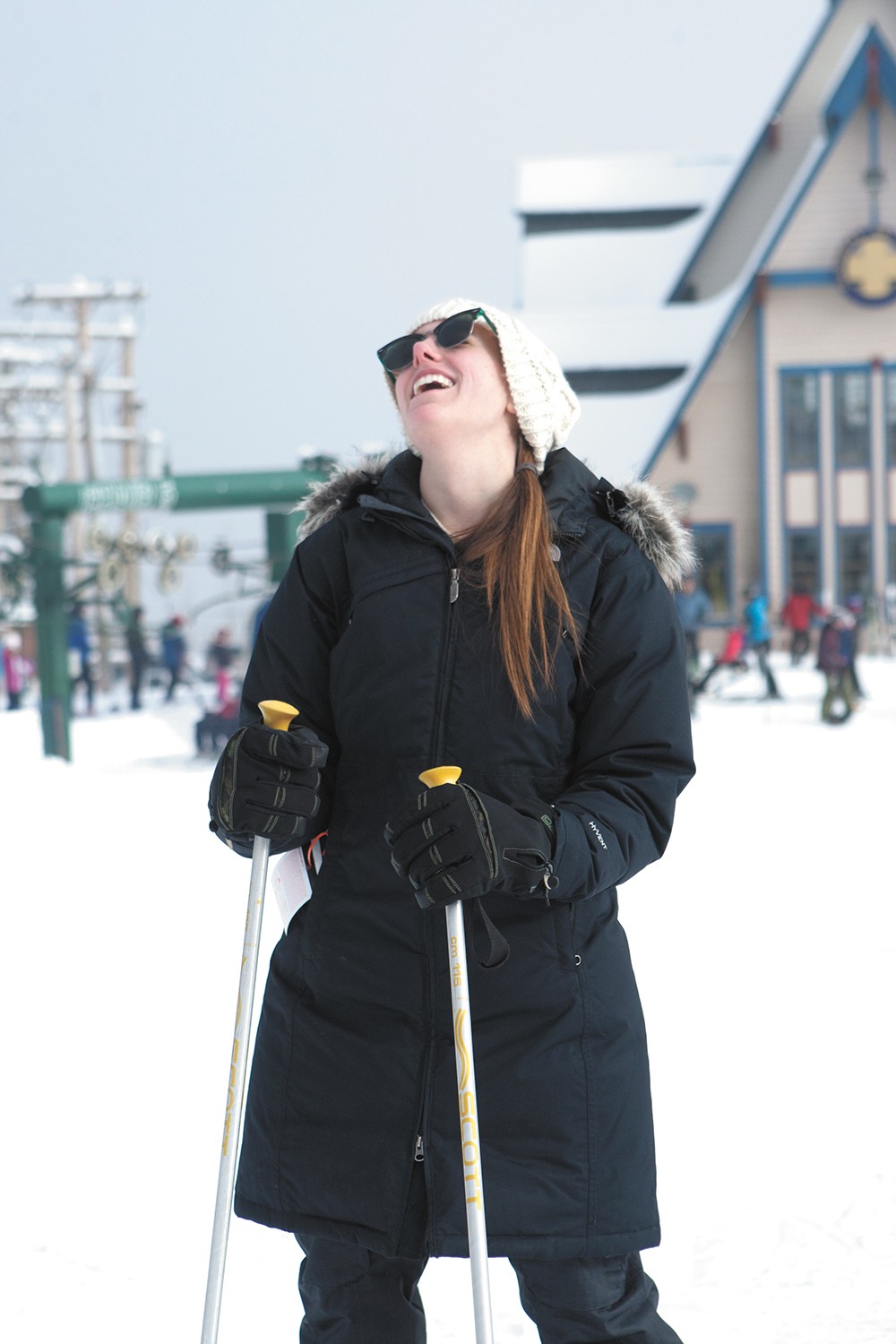 Luckily, we started at the bottom of the hill. After a brief introduction of the finer points of the "pizza" position versus the "French fry," I took my first dip down a minor incline on skis. And the miraculous happened: I didn't fall over.

More pointers were stuffed into my brain as the lesson continued. First, always lean forward. Want to turn? Lean on the opposite ski than you'd think. Don't cross your skis. Keep your upper body relaxed. Put your poles kind of behind you, unless you need to have them in front of you. Not exactly intuitive, but I was (sort of) keeping up.

Eventually, we rode the chairlift to the top of the bunny hill. And something happened on the slope that I never expected. Even with some fantastic falls and 3-year-olds weaving past me, I was having fun. I wasn't scared out of my mind and my novice technique was improving. On the last two runs of the two-hour class, I didn't topple over at all. Through my excitement, it became abundantly clear why people spend time doing this thing called skiing.

Sunday rolled in. I awoke after sleeping like a rock. Every muscle in my legs seemed to have been activated the previous day; my hips, especially, felt aged by 20 years. My right knee had suffered a deep purple bruise. But it was all a good sort of ache. What had I been so worried about before? My nightmares had not come to fruition; there was no falling into nothingness off the mountain. It occurred to me that if learning to ski was the worst decision I made all year, then I'd be in great shape. Next weekend, I thought, I may even go again. ♦