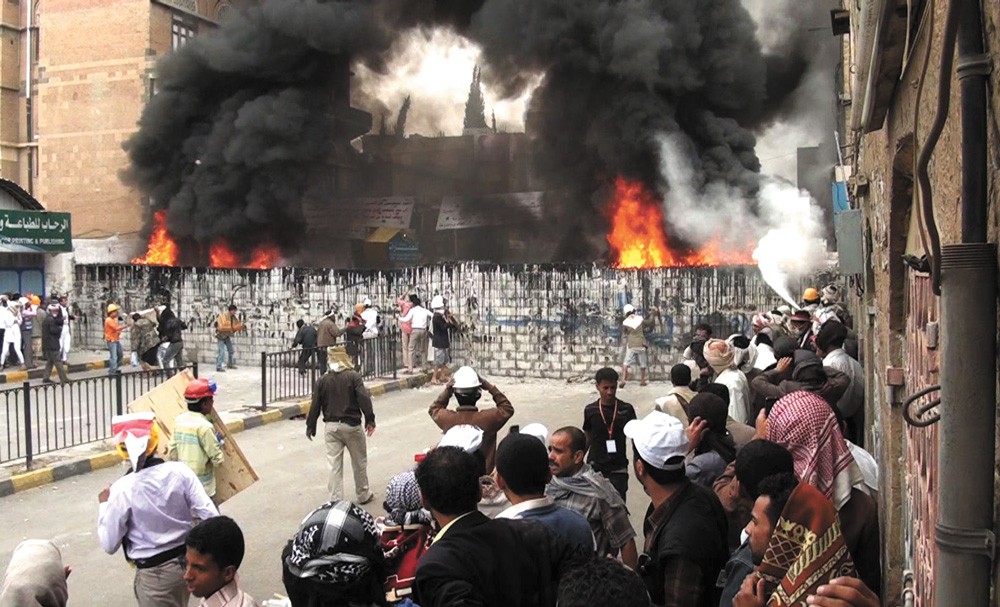 "Karama Has No Walls" is one of the films nominated for an Oscar.

The three Oscar-nominated short films grouped in this program tell remarkable stories of how very different people react to oppression. Sara Ishaq's "Karama Has No Walls" documents a peaceful sit-in protest of the regime in Yemen's "Change Square" that turned violent when thugs built a wall that trapped protesters and then opened fire. There are four interviewees: two fathers whose sons were at the protest, and Nasr Al-Namir and Khaled Rajjeh, two teenage cameramen who were shooting that day in 2011. Their footage is used throughout; it's a testament to their bravery and the strength of their political convictions that they kept shooting; at one point, you can hear Rajjeh praying, clearly fearful for his life, but he never stops rolling camera.

Jason Cohen's "Facing Fear" examines a hate crime from the perspectives of victim and attacker. Cohen takes pains to contextualize the attack, with both men explaining how they were shaped by family traumas and how they individually arrived at an alley in Los Angeles, where Tim Zaal was one of 14 neo-Nazi punks with razors glued to their boots who viciously attacked Matthew Boger, a homeless teenager who was thrown out of his house for being gay. Decades later, the two men reconnect by accident. (The moment, as it's described, is blood-chilling.) The story of how Boger not only forgave Zaal, but came to think of him as family, is so striking and surreal, there's material enough here for a feature-length film.

Malcolm Clarke's "The Lady in Number 6" is a straightforward rendering (cozy British voice-over included) of a most extraordinary life: that of Alice Herz-Sommer, a former concert pianist and the world's oldest Holocaust survivor. (She was 109 at the time of filming, and still tickling the ivories.) The film charts her childhood in Prague, where Kafka and Mahler were family friends, to her imprisonment at the Theresienstadt concentration camp and the loss of so many loved ones. Still, Herz-Sommer has maintained a sunny outlook on life. "I am full of joy," she beams. What a lady. ♦