Joe Feddersen's "Red Star." His artwork employs familiar representations from the land, both urban and rural.

Joe Feddersen works in several mediums — printmaking, glass, mixed media basketry — but above all, he considers himself a storyteller, he says. And that shows in his artwork, especially the three works included in Indie Folk.

With titles like "Blue Chief at Elk Crossing" and "Red Star," the mixed-media monoprints (a form of printmaking where the image can only be printed once) have been printed, then augmented with spray paint and collage elements. Feddersen, who was born in Omak, also employs stencils to repeat specific images — abstracted elk, a canoe, human figures, trees, geometric patterns — referencing the land he grew up on, as well as representations of modern humanity's impact on the land like high-voltage electrical towers.

The result is artwork that is richly layered in symbolism, some of it more overt, other parts more difficult to interpret. That, says Feddersen, is by design.

"When you tell a Native legend or story, there's no moral, you know, like [there is] in European stories," says Feddersen, whose father's side of the family is of German ancestry. "In a Native story, it's more like a horoscope; you read it and you relate to it in your own experience to gain meaning." 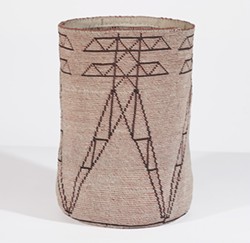 These abstract little images read like historical pictograms, says Indie Folk curator Melissa Feldman, who describes how Feddersen is one of the artists in the exhibition "interested in showing how traditional imagery doesn't only belong in a historic setting or context."

"I often think if there's something that reoccurs in my work, it's about portraying the world around me," Feddersen says.

Sometimes his inspiration comes from a conversation or news article. Vehicle tires with alluring names like "Eagle" or "Open Country" inspired another of Feddersen's basket series, one not in the exhibition. It incorporates the graphic patterns of SUV tire tracks, reflecting on how the Western ethos is both romanticized and commercialized.

His choice of imagery feels as natural as his interest in making things, says Feddersen, who liked art as a young man but didn't pursue it in earnest until his early 30s.

Feddersen now has works in permanent collections of numerous Northwest cities and universities, as well as such venerable institutions as the Smithsonian/National Museum of the American Indian and Whitney Museum of American Art.