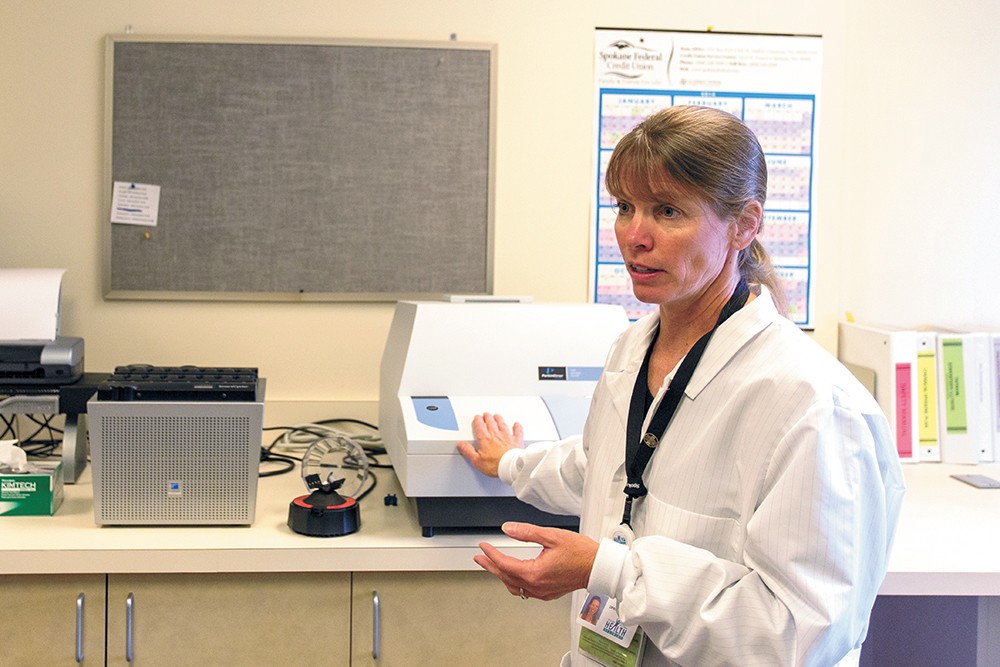 It's a familiar story now. On a cold, cloudless day, a 36-year-old white supremacist places a backpack bomb on a downtown bench at Main and Washington as the city prepares to celebrate Martin Luther King Jr. It's found by three temporary workers who call the authorities. Police clear the area and go to work on the bomb. It doesn't go off. No one is killed. It's a close call.

But even after police assure that the area is safe, more work remains. They remove a portion of the shrapnel and triple-package it for Spokane's bioterrorism lab. Karie Brouillard takes the call. "I don't test bombs," she tells them, but this, they tell her, is covered in "a powdery substance."

Brouillard is the head microbiologist at Eastern Washington's bioterrorism lab, a cluster of rooms in the Spokane Regional Health District building. The lab is a shell of its former self, no longer running the public health tests it used to, for things like tuberculosis and STDs. Yet one of its two remaining functions — the ability to test for bioterrorism agents, like anthrax and ricin — has kept its struggle to find funding in front of local lawmakers.

The lab, which costs about $160,000 a year to operate and tests suspicious substances for law enforcement from Western Montana to Eastern Washington, has traditionally been paid for by federal emergency-preparedness funding, but as that money has dwindled, the lab has looked closer to home. The law enforcement agencies that use the lab most often are facing their own funding demands and staffing shortages, and local cities and counties haven't found money in their own budgets either. A plea to the state legislature this year was difficult as lawmakers struggled to find court-mandated new funding for K-12 education. A short-term extension from leftover federal dollars allowed the lab to operate this spring, but it was set to close July 1. Then, in a last-ditch effort last month, the board of the Spokane Regional Health District voted to use $75,000 from its general fund to keep the lab open through the end of the year. In that time, the health district will make a final pitch to the community.

"We've reached out to over 60 different partners ... for support," says Joel McCullough, head of the health district. "Pretty much everyone is supportive of the lab staying here, but no one has come forward to support it financially."

In Spokane, proponents of keeping the lab say incidents like the 2011 attempted Martin Luther King Jr. parade bombing, the ricin-laced letters addressed to the president, a federal judge and Fairchild Air Force Base that passed through Spokane post offices last year and the suspected anthrax delivered to the Davenport Hotel just last month demonstrate the continuing threats the area faces. The lab is able to test substances to determine whether those exposed need immediate medical attention, and to help in prosecution of such cases.

It's a battle of priorities playing out across the country as funding streams run dry and the memories of anthrax scares drift further into the past. In a barely post-9/11 America, when five people were killed and 17 others injured when anthrax-laced letters were mailed to lawmakers and media outlets on the East Coast, funding for bioterrorism efforts ballooned. The federal government flooded states with new funding to bolster their preparedness for bioterrorism attacks, including new lab equipment, training and preparedness exercises. According to one analysis from the University of Pittsburgh, the government spent about $14.5 billion on "biodefense" in the first three years after 9/11. But by 2010, as the wars abroad dragged on and the country endured the recession at home, these programs hit the chopping block. When House Democrats voted to cut $2 billion from Project Bioshield, an effort started in 2004 to stockpile life-saving drugs and vaccines in case of an attack, a former bioterrorism advisor to George W. Bush called the cuts "incomprehensible," according to a Los Angeles Times report at the time.

"For some reason, we forget the lessons we learned the hard way," Knezovich says. "It takes a major disaster, and we spend all this money to get all the capabilities, and then when it comes down to making sure we have them into the future, people don't want to pay for them because, well, that happened years ago. There's no such thing in this case, because year after year we can show an incident where the lab was used. It's very shortsighted, in my opinion."

When Brouillard receives the guts of Kevin Harpham's bomb inside the lab, she stows away in a sealed-off back room and begins to test the powder. She looks twice at her first results. The bacteria she finds indicates the powder could be anthrax.

"I thought, 'Oh my gosh. This is huge,'" she says today, surrounded by cabinets painted bright red, yellow and avocado green, as if to offset the futuristic gray machines used for testing.

The powder turns out to be rat poison, not anthrax. But the shrapnel is also covered in rat feces, Brouillard finds, brimming with bacteria that could infect victims if pieces of the bomb made contact with their blood.

Brouillard only gets bioterrorism-related tests like this about once a month, and most of them are negative. She knows it can be hard for the public to see the value in something that can seem like a vestige of post-9/11 hysteria, but she argues that the community can't ignore threats all together.

"People have gotten complacent," she says. "Our stories don't really make the media anymore. ... There's a lot more going on than we are really aware of."

Still, statistics about the lab's frequency of use don't necessarily make a compelling argument for more funding. Its supporters also can't argue that it does work no one else can. The state's public health lab in Shoreline can perform the same tests on suspicious substances. Instead, their argument is about time. Potentially hazardous materials can get to the Spokane lab and be tested quicker than they'll make it over the mountains to the westside — especially if weather or construction has closed Snoqualmie Pass. That extra time matters if the tests come back positive and those exposed need medical attention.

City Councilman Jon Snyder sits on the health district board and introduced the idea of spending district money to hold over the lab this year. He knows it's only a temporary fix, but says he sees opportunities for federal or state money if decision makers at those levels would look toward domestic terrorism instead of only international concerns.He points to several incidents in 2012 when border patrol agents responded, unrequested, to Spokane Police Department calls, and wonders why — if their work on the border afforded them time to travel to local calls — funding for those agents couldn't be redirected to local concerns.

"I couldn't believe that. Here we are struggling to put police on the streets," Snyder says. "It wasn't border patrol that helped deal with Kevin Harpham. It was local law enforcement. ... Why don't they give us some of that money for our bioterrorism lab?"

County Commissioner Todd Mielke is reluctant to say whether he thinks Spokane still needs the lab in its current form. He wants to spend this year studying other potential funding sources, and whether private or university labs in town could take on the work of the lab. Yet he knows the financial reality is impossible to ignore.