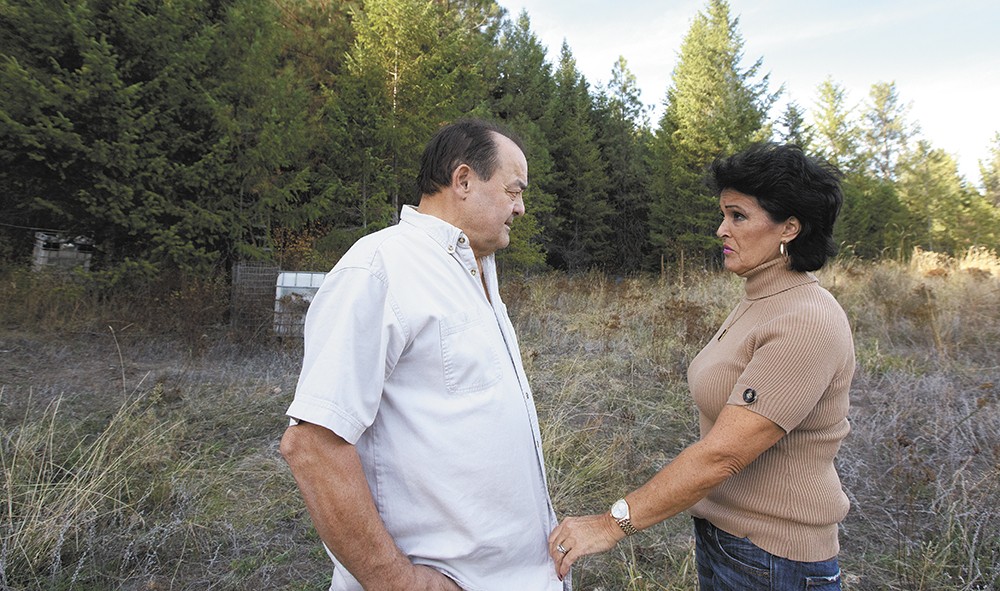 Young Kwak
Two members of the so-called Kettle Falls Five: Larry Harvey his wife Rhonda Firestack-Harvey, on land where they once grew medical marijuana near Colville.

It's just one paragraph in a 1,600-page document

that lays out how the federal government will spend $1 trillion through September of next year. But for some, it could mean not serving a long prison sentence. They key word is "could."

Tucked inside the behemoth spending bill Congress passed before its holiday recess and signed by the president is a bipartisan amendment intended to make the federal government back off on medical marijuana.

The news was hailed by legalization advocates as a milestone victory against the federal government's war on marijuana. Despite being legal in 23 states for medical purposes, the federal government doesn't recognize pot as having any legitimate purpose, medicinal or otherwise. To that end, the feds have brought serious charges that carry serious prison terms against people for using, growing and selling medical marijuana, despite those activities being legal under their state laws.

This disconnect in federal and state law is reflected in the case of the so-called Kettle Falls Five, an Eastern Washington family staring down lengthy prison sentences after the U.S. Drug Enforcement Agency raided their medical marijuana farm last year.

Supporters of the Kettle Falls Five and other pot advocates are encouraged by Congress essentially declaring a cease-fire in its war with medical marijuana. But despite the clear intent behind the legislation, it's entirely possible that the federal government will keep medical marijuana in its cross hairs.

Kari Boiter, the Washington state coordinator for the pro-medical pot group Americans for Safe Access, has been an advocate for the Kettle Falls Five case. She's taken Larry Harvey, one of the Kettle Falls Five, in his 70s and wheelchair-bound from gout, to Capitol Hill to lobby the nation's lawmakers to change how they treat medical marijuana.

"It can have a huge impact here in Washington," says Boiter of the clause in the spending bill. "This opens up a huge door to discuss medical marijuana because it's part of federal law."

Mike Liszewski, government affairs director for Americans for Safe Access, says the legislative intent behind the new law gives lawyers representing medical marijuana patients a clear shot to get their clients off the hook, if they don't get tripped up on a technicality.

But Robert Fischer, the federal public defender representing the Kettle Falls Five, isn't as bullish about the idea that getting the charges dismissed against his clients will be a slam dunk. He's currently analyzing the new legal landscape for medical pot and what it might mean for his client.

"Well, it could mean that the Department of Justice is no longer funded to prosecute or pursue the prosecution on pending cases," says Fischer when asked what the new spending law means. "But that depends on how you read the law."

Fischer isn't sure how the federal prosecutor on the case will read the law.

The U.S. Attorney's Office for Eastern Washington, which is prosecuting the Kettle Falls Five case, referred the Inlander to the DOJ for comment. A spokesman says the department is reviewing the legislation and wouldn't comment further.

The language in the budget amendment states that no funds for the Department of Justice, which oversees a range of law enforcement agencies, can be used to "prevent" states from implementing their medical marijuana laws. Eapen Thampy, executive director of Americans for Forfeiture Reform, says the language of the budget amendment is loose enough that it could still allow federal raids of medical marijuana operations because, strictly speaking, they're not preventing states from implementing their laws.

"This is a very narrow, cosmetic piece of legislation," he says.

Mason Tvert, director of communications for the Marijuana Policy Project, points to a 2013 DOJ memo stating that the feds would back away from medical pot if they believed it was being robustly regulated at the state level. Tvert says that the legislation won't greatly change the situation and formalizes the existing arrangement.

Even though the federal government is more tolerant of medical marijuana under this existing arrangement, it still means raids and people going to prison. According to a 2013 report from Americans For Safe Access, during the previous 17 years the U.S. Drug Enforcement Administration conducted 528 raids. More than half of those raids (270) occurred under the Obama administration. Eighty people, according to the report, have gone to prison under federal charges for their involvement with medical marijuana.

Boiter says that although this legislation might provide an opening for these incarcerated individuals, they face particular challenges. Once they've pleaded guilty to these charges, she says, their assets are seized, making it difficult for them to scrape up enough money for a lawyer to challenge their incarceration.

Even though lawyers representing medical marijuana patients might have more leverage, Boiter expects there to be some resistance.

"It's not going to happen overnight," she says of getting federal pot charges dismissed. "[Federal law enforcement] are not going to say, 'OK, I guess we are done here.'" ♦