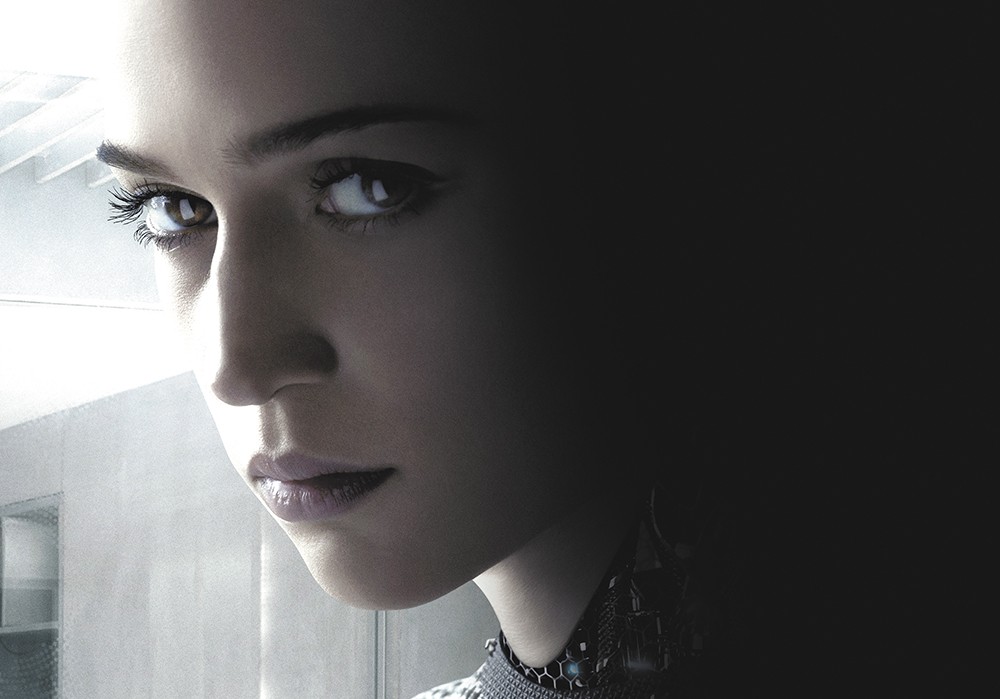 at least not in the conventional sense that we think of a character's first appearance.

We see him as computer programmer Caleb Smith (Domhnall Gleeson) enters the massive, isolated Alaskan compound of his boss, search engine entrepreneur/billionaire Nathan Bateman (Isaac), who's pounding away at a punching bag. When they sit down together and Caleb begins fumbling through awestruck compliments for his legendary employer, Nathan stops him with a sigh: "Dude, can we just get past that?" You might have a notion of what a mad scientist would look like and act like, but this guy — with the shaved head, Bluto-from-Popeye beard and barrel torso and party-bro demeanor — is almost certainly not it.

It's rare for a science-fiction film's high-concept to get stolen out from under it by a performance — but then again, Isaac appears to be a rare kind of actor. Because whatever writer/director Alex Garland wants to say about the nature of what it means to be alive, or the very human qualities of deception and self-deception (and I'm not sure he's really saying all that much) is not remotely as delightful as watching one of the most talented actors in the world doing his thing.

The premise is built around the reason Caleb has won an opportunity to spend a week with Nathan, who needs assistance with a very special experiment. He has developed an artificial-intelligence robot in female form called Ava (Alicia Vikander), but the question of whether Ava is truly sentient requires a "Turing test." It's Caleb's job to spend time with Ava — her translucent limbs, skull and torso exposing the sparkling machinery beneath the surface, so as to provide a constant reminder of her synthetic nature — and ask the right questions to figure out what's going on in her man-made brain.

Those interactions naturally become complicated as Caleb begins to wonder whether Ava is manipulating him, or Nathan is, or both of them are. Garland — a frequent screenwriting collaborator with Danny Boyle (28 Days Later, Sunshine) making his directing debut — creates an effectively ominous, claustrophobic environment full of reflective surfaces, with characters often appearing duplicated in mirrors. Yet like those surfaces, Ex Machina seems mostly to be reflecting back whatever a viewer might already be bringing to the experience, from general awareness of certain genre conventions to the specific uneasiness of dealing with an unpredictable creature — effectively played by Vikander with the requisite enigmatic appeal — that may or may not react or feel the way a human does. Garland's premise raises that "what is human?" question, but Ex Machina seems far more interested in letting it float out there to create tension than answering it in a new or intriguing way.

And that would be a huge problem, if Isaac weren't making Nathan the most interesting thing about Ex Machina every moment he's on screen. There's nothing simple about the way Isaac opts to play this narcissistic genius, whose interactions with Caleb suggest a combination of needing an audience and needing a drinking buddy. It could easily come off as a goofy distraction when Nathan fires up the disco music and starts dancing with his silent maid/assistant (Sonoya Mizuno), but Isaac sells it with the confidence of a guy who knows he's basically The Most Interesting Man in the World. It's a start-to-finish brilliant piece of acting, leading up to a key moment — saying any more would constitute the spoiler of all spoilers — in which Nathan's reaction is so hilariously singular, it feels like the only possible reaction perfectly in keeping with the character Isaac has crafted.

Ultimately, there may be a bit more going on beneath the polished surface of Ex Machina, including some intriguing female empowerment ideas and even a spin on the notion of technological shifts built around pornography. But even if multiple viewings suggest a deeper, headier resonance to the story, it only takes one viewing to realize what it looks like when an actor is in complete command. The most powerful question to come out of this movie might ultimately be, "What else is it going to take for the world to realize that Oscar Isaac should be a star?" ♦