Looking ahead to the next months, we’re excited about a lot of the music coming our way. Sure, the Arena only has Brad Paisley (although he’s pop-country, he can at least play guitar like a banshee) on its lineup thus far, but we’re positive that with hot acts like Metallica and Pearl Jam on the road this year, we have a very bright booking future at the big venues. So far, here are some of the acts we’re thrilled about coming through the Inland Northwest.

JAN 11 - CAR SEAT HEADREST
The Bartlett, with Mirror Mirror and Jan Francisco
This is a band on the rise. One that you won’t want to say you missed out on. After catching the ear of the Internet for his home-recorded tapes, Will Toledo (aka Car Seat Headrest) has been signed to Matador Records, moved to Seattle and added three players to his act. His new album is one we can't stop spinning. Catch our interview with band frontman Toledo here.

FEB. 8 - DR. DOG
Knitting Factory, with Hop Along
Dr. Dog’s albums have made many a Best Of list in recent years, and Feb. 5 the Pennsylvania rock band is set to release a new record, Psychedelic Swamp. Just three days later, the band swoops into Spokane to show off its happening rock 'n' roll. Their opening act Hop Along is also something to get excited for. Check out frontwoman's Frances Quinlan's crazy whisper voice right now.

MARCH 8 - DAVID CROSBY
Bing Crosby Theater
Last year, we had Neil Young and Graham Nash perform in Spokane. If we can't have Crosby, Stills, Nash and Young here at the same time, we may as well continue to have them come one at a time. Next up is California singer-songwriter and former Byrds member David Crosby. His show is sure to include songs from his decades in the biz. Looking for a little laugh? Check out his Twitter feed immediately.

MARCH 10 - UMPHREY’S MCGEE
The Hive
This is a jam band that is more than used to playing to thousands of fans. So for the Hive up Sandpoint, which caps at about 500, to get this act is absolutely a big deal. The show marks the band’s 2016 tour kickoff. Expect their progressive improvisation sound to ring loud and long into the night. 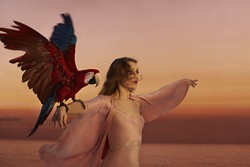 Joanna Newsom is one of Spokane's biggest gets for the year 2016.
Bing Crosby Theatre, with Robin Pecknold
Her voice is a cross between elfin chipmunk and celestial angel. The harp player’s 2015 album, Divers, was one of the best of the year and that she’s stopping in Spokane is beyond exciting. Will her hubby Andy Samberg come through with her? It would be cool to see him waiting in the wings.

VOLUME/SASQUATCH/ELK FEST
No, none of these lineups are locked in as of yet, but that doesn’t mean we aren’t excited. After looking at the Coachella announcement this week, we know acts like Sia, Grimes, Sufjan Stevens, LCD Soundsystem, Courtney Barnett and maybe even Guns N’ Roses are on the circuit and could be heading the way of the Gorge Amphitheatre for Sasquatch! That lineup announcement will be next week. In the meantime, note that Volume is the first weekend of June this year and Elk Fest is the weekend after.

THE BANDS THAT WON’T LEAVE US ALONE
Young Dubliners, Micky Avalon, Reverend Horton Heat and Tech N9ne (and more) are all coming back to Spokane at the Knitting Factory and the Pin this year. They can’t get enough of us. Perhaps we’re not looking forward to them as much as they’re looking forward to us. And that's awesome!