Once again, Cathy McMorris Rodgers and Joe Pakootas face off for her seat in Congress. Here are some ways they differ 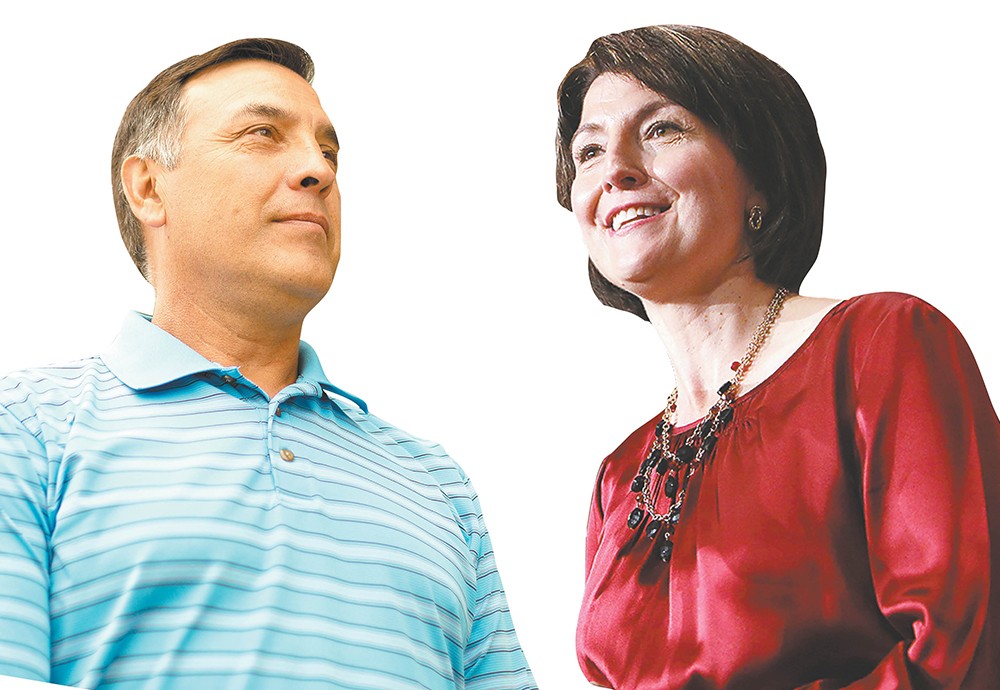 Democrat Joe Pakootas (left) is hoping that a second time will be a charm in unseating U.S. Rep. Cathy McMorris Rodgers (right).

In a house in West Central that's been converted into offices for Joe Pakootas' campaign for Congress, there's a wall that shows just how busy the candidate's summer has been. It's covered with fliers for community events ranging from the Garland Street Fair to Inchelium Days, along with a sign reading, "Here's where you can find Joe."

This is the second attempt by Pakootas, a businessman and tribal leader, to unseat Republican Cathy McMorris Rodgers, first elected to represent Washington's 5th Congressional District in 2004.

"Boy, I think name recognition is kind of a driver this time," says Pakootas, a Democrat who has recruited 800 volunteers for his second run. "We are going to concentrate a little bit more in the city of Spokane and Spokane County," he says, noting that McMorris Rodgers received only 40 percent of the vote in Spokane County, the district's most populous county, in August's top-two primary election.

Despite McMorris Rodgers finishing the primary election with 42 percent of the vote for the entire district (Pakootas finished second with about 32 percent), she's won her past four re-election campaigns with at least 60 percent of the vote. This time around, she's raised nearly $2.5 million for her campaign to the $166,000 raised by Pakootas.

Over the summer, she spent time in the district while raising money for other Republicans. Recently, she's introduced legislation targeting government spending that hasn't been authorized by Congress.

"On behalf of the people, this is part of our responsibility," says McMorris Rodgers.

Pakootas has expressed concern that the bill is a backhanded way of defunding crucial government programs. With a little more than a month until ballots are due, Pakootas says differences like these are coming into focus.

"The issues are more prevalent in the district now," says Pakootas.

Pakootas wears a ring depicting "End of the Trail," a sculpture by James Earle Fraser of an Indian slumping on a horse that's come to a sudden stop.

For 16 years, Pakootas served on the Colville Tribal Council and later helped reinvigorate its business operations as CEO. After finishing a contract to run business operations for the Nez Perce Tribe, Pakootas took over as CEO of the Spokane Tribe earlier this month. Pakootas takes issue with how McMorris Rodgers, whose district encompasses three federally recognized tribes, has dealt with the Spokanes.

For two decades, the Spokane Tribe has sought a settlement with the federal government over the impacts the Grand Coulee Dam has had on the tribe. The dam, constructed between 1933 and 1942, flooded the tribe's land and blocked salmon runs, which were a significant part of the tribe's diet and culture. Although the Colville Tribe, which was similarly affected, received a $53 million settlement in 1994 and receives an annual payment, the Spokanes still haven't.

Pakootas says that McMorris Rodgers has blocked the settlement with the Spokanes because the tribe has pursued a controversial gaming and retail development that Gov. Jay Inslee gave final approval to in June. McMorris Rodgers says she has opposed the development because of its proximity to Fairchild Air Force Base.

"That's a backwards way of negotiating," says Pakootas. "She should have helped them with both issues because they have legal standing [for the settlement]."

The Spokane Tribal Business Council didn't respond to a request for a comment, but McMorris Rodgers denies Pakootas' assertion.

"I don't know where he got his information," she says. "That's not true. I have worked very closely with the Spokane Tribe to find an approach that would work."

On his website, Pakootas claims endorsements from a number of tribes across the Northwest, including the Colvilles and Spokanes, but not the Kalispels. Recently, the Colville Tribe praised McMorris Rodgers for supporting legislation that would give tribes more control over their land.

The Kalispel Tribe (which worried that the Spokanes' casino would harm its Northern Quest Resort & Casino) praised McMorris Rodgers in a statement to the Inlander, calling her "responsive to the needs of our community."

Both candidates have made veterans' health care a key issue. For years, the Veterans Health Administration has struggled with long wait times (in some cases months) for veterans to get doctor's appointments.

McMorris Rodgers has introduced a "discussion draft" of a bill that would put health care facilities run by the Department of Veterans Affairs under the management of a nonprofit organization, while also allowing veterans to pursue private health care options.

"The VA does some things really well," says McMorris Rodgers. But, she says, veterans should be allowed more choice and a nonprofit would provide more oversight and accountability.

"[The VA] just needs to be brought back up to the right funding level," says Pakootas.

While McMorris Rodgers' reforms are supported by the conservative group Concerned Veterans for America, they're opposed by other groups, such as the Disabled American Veterans and the American Legion, which worry that they would shift veterans' care to the private sector, which they argue won't provide specialized care.

The Trans-Pacific Partnership is a proposed trade agreement between 12 Pacific Rim countries. Proponents say it'll help trade-dependent Washington state export its goods. But detractors say it was written in secret, gives corporations too much power and will squeeze labor.

Although McMorris Rodgers voted to give President Obama fast-track authority to negotiate the deal, she's been noncommittal about supporting it. She expects it'll be up to the next president.

"There have been enough concerns raised over the the TPP that I don't believe it's going to move forward," she says. "They are going to have to go back to the table and negotiate with the new administration." ♦