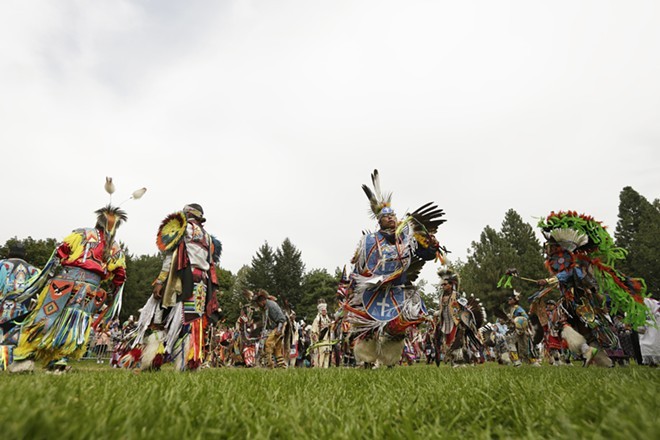 Young Kwak
Dancers at the Gathering At The Falls Powwow in August.
Today, Spokane joined a multitude of cities across the nation committing to replacing Columbus Day with Indigenous Peoples Day, instead choosing to celebrate the rich history of tribal culture in Spokane.

A celebration begins at 2 pm at City Hall, and features remarks from local tribal leaders and appearances from the Salish School of Spokane and Rogers High School students. From there, the event moves at 2:30 pm to Canada Island (soon to be renamed to recognize the tribe's use of it as a fishing ground) in Riverfront Park, where there will be performances by the Coeur d'Alene Tribe's Powwow Sweat Team and a blanket dance to support the Standing Rock Sioux Tribe.

Local organizer Barbara Gongyin says the event is meant to be “optimistic — a march instead of a walk,” and that the informal theme is “past, present and future.”

Columbus Day became a national holiday in 1937, and began as a celebration of Italian-American heritage and the legacy of worldwide exploration. However, since that time, much work has been done to shift the narrative and to expose the truth of our nation’s origins.

Many misconceptions exist regarding the discovery of North America, including that Christopher Columbus was the first to do so. He never actually made it to what is now the United States, and by the time he landed in Central and South America, indigenous peoples had already populated the continents for many years.

Spokane, specifically, has a tribal history thousands of years old, owing its name to the Spokane people, and presently, as Spokane Council President Ben Stuckart has said, “[Spokane has] one of the largest percentage of urban Indian populations in the United States.”

When asked how the general public should celebrate this holiday, Gongyin asked that people dig into the history, saying, “it’s important to teach the history, and if you don’t know it, to learn a little bit.”

She outlined that most native children learn about Columbus in school, but that other children miss out on the opportunity to engage with tribal history and culture. Gongyin went on to say that the shift to Indigenous Peoples Day is gratifying for the Spokane tribal community.

“It's a recognition that we’re still here.”