What should be done to improve our immigration system? 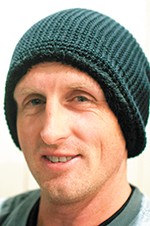 So you had to prove it was a legit marriage?

They did a lot of interrogations. They interviewed us each one of us separately and asked us the same question to make sure our answers lined up.

Make it easier to immigrate here. Eighty percent of people are denied immigration. I read it — I actually did some studying on this.

What caused you want to research this issue?

My parents immigrated here [from] Russia. They applied for visas and got a green card. They did it the right way.

I immigrated with my parents here in the spring of 2001. A couple months before 9/11 happened. Now they're trying to close doors and build walls and whatnot.What do you think about that?

I have a lot of Mexican friends. But I haven't really looked into why [Trump] is doing it. He's doing it because cheap labor, and because of the people live here, right?

It's not as easy as people like to make it sound.

What's complicated about it?

Well, there's two extreme sides. People that think we should let anything and everybody in because it's the kind thing to do. And then people who think it's unwise financially and not fair to people in the country. The reality is somewhere in the middle.

I think to come up with a specific criteria of what qualifies someone to enter the country, and then what kind of benefits they should receive... Especially with health care and stuff like that, to not easily provide it. [Require] someone to get established in the country before they receive some of the benefits.