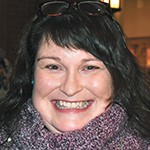 I think it's a double-edged sword. I think it can really bring people together or tear them apart. Sometimes it feels like junior high, but sometimes it's the only way to reach friends who you haven't seen in decades. So I'm glad it's there, because I'm still able to chat with friends I haven't seen in forever.

I'm not really happy with it personally, because I think what it does is separates families. I've noticed the older I've gotten, the less and less I'm able to share my time with family when we're all together, because everybody is on Facebook or some other form of social media. So, for me personally, I'm on what's called a Facebook cleanse so I'm not even using Facebook.

I guess with Facebook what I use it for is to watch people embarrass themselves. It's also a great way to network and buy stuff like the market. I'd say the only downfall about it is the drama people post on there. If you're meant to be a business site don't post your drama, your problems, all of that.

I feel like it's good if you use it correctly. I feel like it's kind of abused, overused a little bit. I was just having a conversation today, and somebody said it was like equivalent to not having an arm, like not having a social media site. I thought that was interesting, because I find myself happier when I'm disconnected from all of that.

I use it probably more frequently than I should. I don't know if it's necessarily a place for realism, so I have been trying to kind of limit myself.

What do you use it for?

Mostly just looking and seeing what friends are doing.