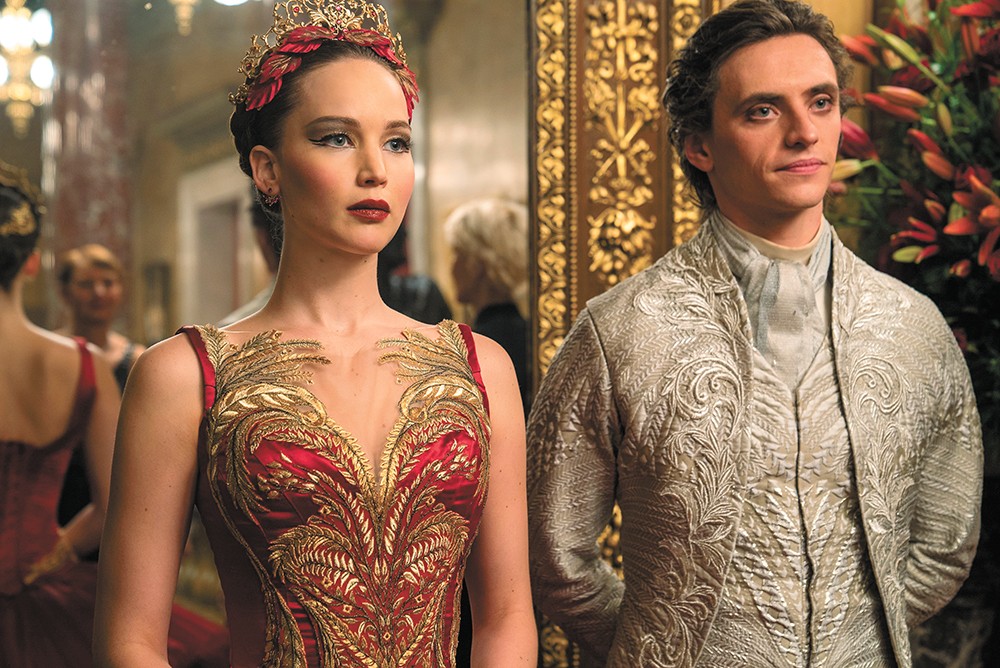 Jennifer Lawrence might have an Oscar, but she's a bit out of her depth playing a Russian spy in the thriller Red Sparrow.

Red Sparrow is based on a novel

written by a former CIA operative, so I'm forced to believe that much of what we're shown is completely plausible.

I'll believe that the Russian government has special spy academies where students learn all kinds of sensible skills — picking locks, identifying chemical compounds, using your sexuality as a weapon. And I'll go along with the notion that the Agency is lousy with double agents and rats, willing to dispense valuable information to the enemies at a moment's notice.

What I don't buy is Jennifer Lawrence as a Soviet ballerina-turned-superspy, complete with a shaky Russian accent, who goes from pirouetting civilian to full-on Atomic Blonde in a matter of months. It's not for Lawrence's lack of trying: She simply hasn't been given a compelling character to play.

Her name is Dominika Egorova, and following an onstage accident that leaves her with a broken leg and a stalled dance career, she's approached by her uncle (Matthias Schoenaerts), a Russian intelligence officer, with an interesting proposition. She's to lure a slimy politician into a hotel room and get her hands on his phone. In exchange, her sickly mother (Joely Richardson) will receive a lifetime of medical care.

But there's a hiccup. The politician attacks Dominika and he's murdered in front of her by a special agent. Knowing she could now be an asset to the government, Dominika's uncle sends her off to spy school, in a chilly, remote estate presided over by an icy, dispassionate Charlotte Rampling. Dominika is a quick study, and so she's then whisked off to Budapest, where she's tasked with cozying up to American CIA agent Nate Nash (Joel Edgerton) in an attempt to uncover a mole supplying Russian intel to the U.S.

Nate is instantly suspicious of Dominika's intentions: He's almost certain she's investigating him, and tells his cohorts as much. But he begins a relationship with her anyway, for no other reason, I suppose, than she looks like Jennifer Lawrence and he looks like Joel Edgerton. What could possibly go wrong?

There were a few things I appreciated about Red Sparrow. Its solemnity took me by surprise. It's much quieter than standard Hollywood fare, and far more brutal: Some of its prolonged sequences of torture, particularly one involving an impromptu skin graft, are disturbing. And despite Dominika's general deftness, the film allows her to make the occasional mistake, to zig when she should have zagged, which suggests she could have been made into a believable, interesting character.

The movie has also been directed with workmanlike efficiency by Francis Lawrence (no relation to Jennifer), who previously made three of the four Hunger Games films, and he's assembled an excellent supporting cast of reliable character actors — Ciarán Hinds, Jeremy Irons, Bill Camp, Sakina Jaffrey, Douglas Hodge and Mary-Louise Parker in a scene-stealer of a cameo as a vodka-swilling chief of staff.

But as far as its espionage plot is concerned, Red Sparrow is covering well-trodden territory; your average episode of The Americans has more intrigue and suspense. It's a standard grab bag of blackmail, seductions, double crosses and mistaken identities, punctuated by the requisite costume changes and hair colorings, and we try to follow along and connect all the dots in our heads before the other shoe inevitably drops.

Have I simply seen too many spy movies, or is it merely lazy plotting? I'm leaning more toward the latter, but perhaps I wouldn't have minded the belabored machinations of the story had the people at its center possessed a shred of personality or spirit. They're merely game pieces being moved around on a chess board, and we know exactly which square they're going to land on. ♦