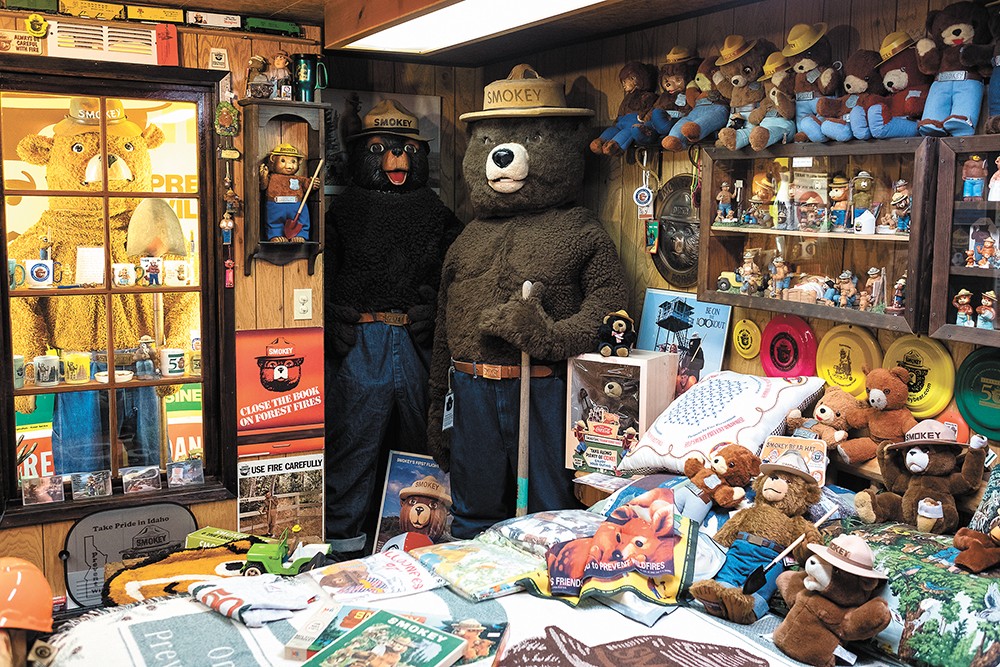 Hector Aizon
Smokey the Bear oversees his own room at the Fire Lookout Museum in Spokane.

Smokey Bear has his own bedroom at Ray Kresek's north Spokane home,

situated on what resembles a pine tree clearing in the National Forest. Really, though, it's Kresek's homage to bygone days of wildland firefighting at his Fire Lookout Museum.

Thirty varieties of regional conifers and other native shrubbery fill most of Kresek's 1-acre plot, forming the backdrop for a unique structure in his backyard: a nearly 90-year-old fire lookout cabin. Built during the 1930s when forestry departments wanted to top every mountain with a lookout, resulting in more than 8,000 such structures nationwide, the cabin now sits atop a manageable 6-foot platform. Adjacent is Kresek's other on-site lookout: a replica of a tower style incorporating pine trees as part of the structure, jutting 60 feet upward.

Next to the lookouts is a 1936 garage built by the Civilian Conservation Corps for use by the Washington Division of Forestry in Usk. It houses a fully restored, fire-engine red 1953 Chevrolet fire pumper, formerly "Spokane Fire Dept. Truck-75," which Kresek purchased from the department from which he retired. Otherwise, the shed itself and many of the items at the non-profit museum were donated by like-minded history enthusiasts. 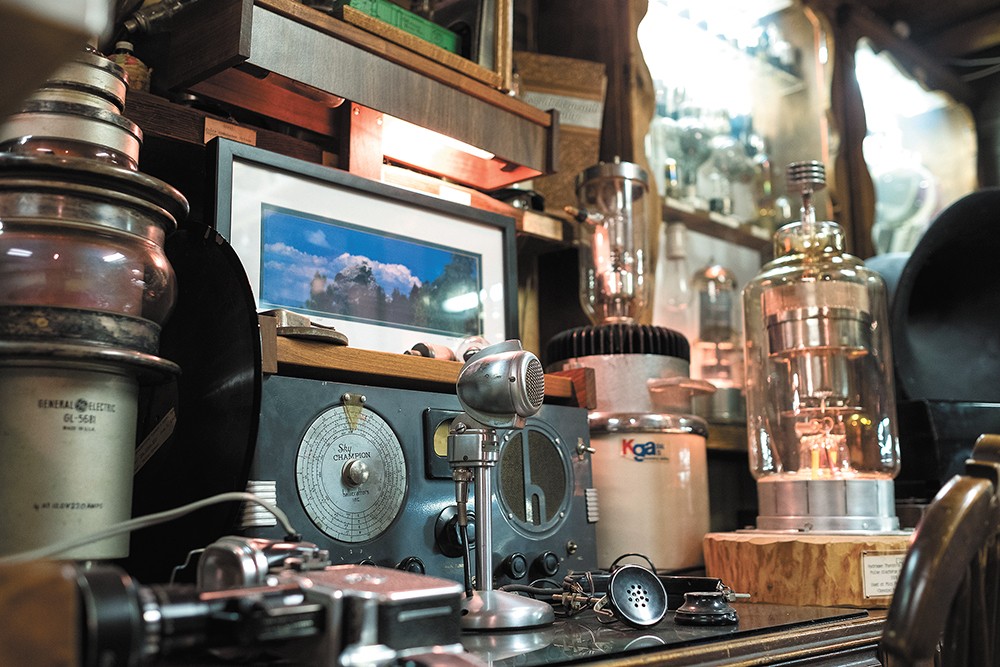 The house is full, too. A basement room contains 2,400 Smokey the Bear items, while the meticulously researched, restored and documented collection numbers around 19,000 total items. Some objects have been replaced by newer technology, such as one of six panoramic cameras used to pinpoint fires, as well as glass vacuum tubes from old radios.

Other items testify to the awesome power of fire, like the charred remains of the U.S. Forest Service sign from the 2014 Carlton complex fires — the largest Washington wildland fire on record at more than 250,000 acres burned.

who had been collecting memorabilia since the 1960s. Yet the museum didn't fully take shape until Kresek retired from the city's firefighting force in 1988.

That summer, he and his late wife spent their time volunteering at the aptly named Heaven's Gate Lookout tower. Located above Idaho's Hells Canyon at 8,429 feet, it offers breathtaking views across Idaho to Montana's Bitterroot Mountains, as well as to peaks in Oregon and Washington. It was heaven, he says, but also gut-wrenching.

"We watched Hiroshima-size smoke columns rise in the sky almost daily for a month while nearly a million acres in Yellowstone National Park and thousands more burned in the Selway and Frank Church Wilderness areas of Idaho. It was a bittersweet summer for someone who had been taught to put out fires to have to watch them burn until they became a disaster."

Kresek went on to visit nearly one-third of the Northwest's 3,313 lookout towers in preparation for writing Fire Lookouts of the Northwest in 1998; he updated the book in 2015.

Across the nation, lookouts continue to disappear. Of Washington's original 656 towers, only 107 still stand, and only 30 are manned. In Idaho, which had the most towers in the U.S., at 989, only 196 towers remain, 60 are staffed.

While some towers have become popular vacation rentals — recreation.gov makes forest service towers and cabins available through its website — others are no longer populated with paid staff or volunteers, leaving them vulnerable to vandalism. The cabin atop the Lookout Mountain tower in Boundary County, Idaho, for example, was removed after vandals damaged it last year.

Although he's in his 80th year, Kresek stays busy updating the collection, slated to eventually go to the Stevens County Historical Society. Kresek has also been talking with the National Museum of Forest Service History in Missoula, Montana, which is nearly halfway to its $10.5 million goal for constructing a museum for its 50,000-plus item collection.

Kresek was featured in a 2011 Idaho Public Television Outdoor Idaho segment and honored the same year with a Silver Smokey Bear Award on behalf of the Ad Council, National Association of State Foresters and the Forest Service for "sustained excellence in wildland fire prevention." And he continues to support the cause. He's a member of the Forest Fire Lookout Association, formed to document lookout sites, organize restoration, and even list lookouts for sale. Members range from environmentalists to lookout enthusiasts, writers to forest-fire personnel, many of whom know each other or know of each other in the rarified world of wildland firefighting.

at the Idaho Panhandle National Forest's St. Joe Ranger District. From Pullman, Washington, Bacon is currently exhibiting his photography at University of Idaho's Prichard Gallery in an exhibition entitled Lookouts in Fire Detection.

Bacon's exhibit is in conjunction with Facing the Inferno: the Wildfire Photography of Kari Greer, which features 64 up-close-and-personal photos of every aspect of firefighting: a line of firefighters in telltale mustard yellow shirt and olive work pants digging a fire break, smoke-choked highways, a chopper framed in a plume of fire retardant as it hovers above a hotspot. Some images, though, are just shapes defined by a palette of fire colors: cherry, orange, gold and black.

Both Greer's and Bacon's exhibits provide a unique look inside wildland firefighting culture, which continues to evolve as discussions focus on the future. Issues range from state, federal and even local funding, to the impact of climate change, to the best allocation of resources — apps, drones, air patrol, firefighters — in spotting, preventing and fighting wildland fires.

EDITOR'S NOTE: This story has been updated since publication to correct a date and Smokey Bear's name.