Why Spokane's breweries are setting up shop downtown 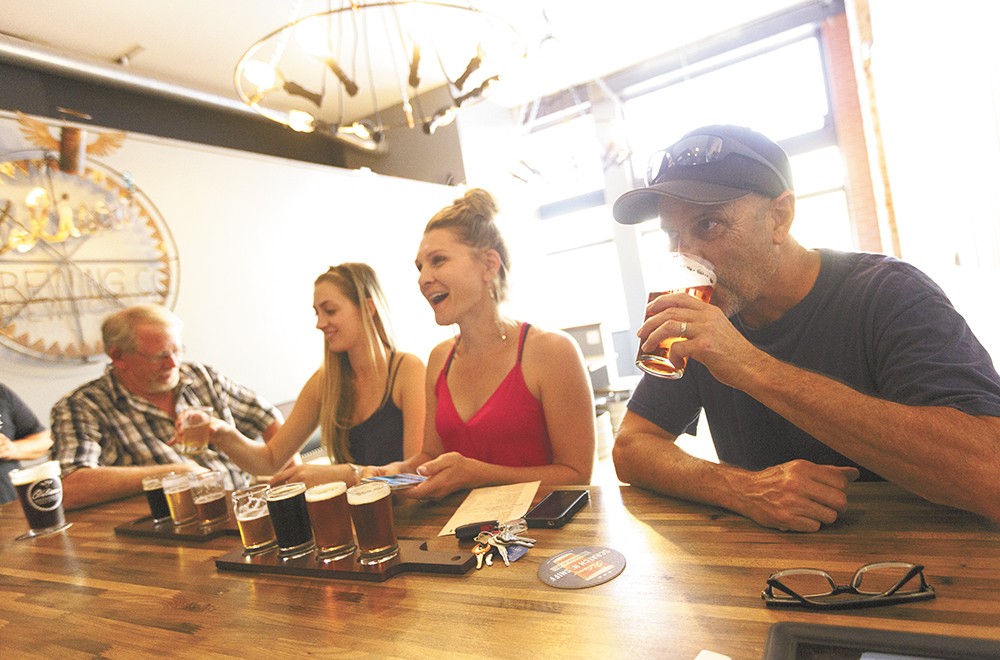 In a matter of months, beer tasting is going to become a lot more convenient in Spokane. What might have been a day spent hopscotching across the region for brewery tastings will soon require beer fans to merely saunter a few city blocks.

With River City and Steamplant already brewing in downtown Spokane, the city's core is now home to an Orlison Brewing Co. taproom and will soon welcome a relocated Iron Goat brewery and restaurant, as well as a small brewery incubator (see page 24). And there could be even more beer action heading to downtown beyond that.

On the way to Iron Goat's current east Spokane location, you would be forgiven for thinking you've gotten lost while driving through a hardscrabble neighborhood in the shadows of grain silos. The place has done well, mostly due to Iron Goat's loyal following, but owners and brewers Paul Edminster and Greg Brandt say the brewery has outgrown the 4,100-square-foot spot, and if they're going to move, they want to be somewhere people can see them after those first three years off the grid. What they've found is a historic building on Second Avenue on the west side of downtown.

"I stumbled across the building and it's a beautiful structure. We need more space, and it will be nice to be more visible compared to where we've been," says Brandt of the 10,000-plus-square-foot facility.

With construction beginning in the coming weeks, Iron Goat plans to overhaul the interior of the building to house production in the back and a taproom and restaurant up front. The intention is to restore some of the charm that the building, constructed in the early 1920s, had in its early iteration as a Chrysler dealership before it became home to various automotive repair businesses over the years. Brandt says Iron Goat is working to add the space to the Register of Historic Places.

There's also room for a beer garden on the side of the building, and enough space for the brewery, should sales continue to climb, to expand its production to as much as 10,000 barrels annually.

"When you have demands for beer and you don't have the facility to make it, that's frustrating," says Edminster.

About two and a half blocks away is the new Orlison Brewing Co. taproom, which opened last week, giving the Airway Heights operation a chance to more easily engage with its customers and experiment with different beer styles. Formerly Luxe Coffee House, the taproom in the Odd Fellows building is cozy, but plenty big to serve up 16 Orlison beers, many of which the public hasn't been able to find too easily.

The production facility in Airway Heights will remain, and the taproom won't affect Orlison's surging distribution of their canned product, which is now making its way to Canada, parts of the East Coast and other U.S. markets. Orlison has always poured beers at the warehouse, but it wasn't the best setup.

"We'd have put out on Facebook that we were closed because Mark [Borland] and Bernie [Duenwald] are brewing," says Kristen Silver, Orlison's operations and logistics manager.

"And it wasn't the easiest place to find and, let's face it, people don't want to drive all the way out there."

The downtown beer boom could see another addition very soon as No-Li, which operates out of an ultra-popular space on the Spokane River just east of the Gonzaga campus, looks to add a second location, possibly downtown. The brewery's John Bryant says they are still looking at spaces and plan to make a final decision soon.

"We have a local priority of creating a brewery that is communal, brings Spokane together and complements the greatness of the city," he says. Downtown is an obvious hub, Bryant says, but not always convenient for residents of the region at large.

Regardless of No-Li's move, by the time Iron Goat opens, there will be almost a brewery district emerging at the west end of downtown, where River City has been since its inception a couple of years ago. In the collegial brewing industry, this move seems to be well-received by brewers looking to capitalize on the emerging beer tourism in Spokane.

"Having a collection of breweries and great beers all within easy walking distance will be another amenity for locals and visitors," says River City Brewing owner Gage Stromberg. "Each of us supports lots of events, nonprofits and artists in our locations and elsewhere, and I hope to see our downtown benefit from it, just the way we all benefit from a thriving downtown." ♦