Researchers at WSU are trying to create hardier honeybees 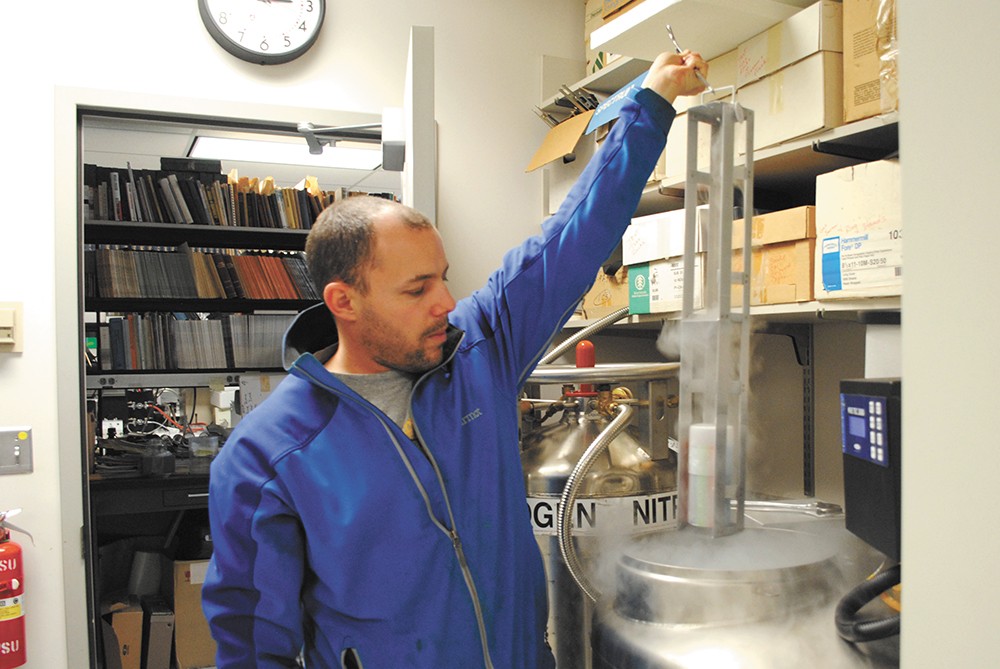 A liquid nitrogen mist seeps out of the drum's opening. Slowly, he pulls out a metal arm holding a package filled with tiny, plastic straws.

"This is the only place you'll find a collection of frozen honeybee semen on Earth," says Hopkins, a honeybee researcher at Washington State University. "We've got honeybee semen from almost every subspecies in Europe."

The drum contains 350 straws containing bee semen from Italy, the Republic of Georgia, Kazakhstan, Slovenia, Poland, France and the United States. Hopkins' bee breeding program is the only in the world to incorporate frozen germoplasm from male honeybees. Researchers like Hopkins hope those genes will produce hardier bees, more resistant to the colony collapse phenomenon, which has decimated bee populations in recent years.

"I've given out queen bees before to other researchers looking at bee genetics," Hopkins says. "But all of this frozen male germoplasm has been used to breed the bees here at WSU."

Now those bees are being put to the test, thanks to a research grant from Project Apis m., a nonprofit devoted to protecting honeybees. Hopkins is transporting the bees down to California this spring. These honeybees are bred with the traits of a Caucasian honeybee, a hardier, more mountainous bee from Eastern Europe. He'll be housing the honeybees near an almond farm and tracking their progress through the winter.

"We're going to see how they forge and interact with the almond crop. These bees are tough. We bred them to tackle the challenges of a harsher climate," Hopkins says.

Walter Sheppard, chair of the entomology department at WSU, says that this breeding program was unique to the university.

"Right now, anyone can go on the Internet and order semen from an award-winning bull in 1974. The genetic material lasts for decades. When we started breeding bees, we asked ourselves, why can't we do the same?" he says.

Sheppard says Hopkins could could select genetic material with the best traits, impregnate a queen bee with that mix, and breed better workers. This means honeybees with higher resistance to all the contributing factors in colony collapse: disease, pests and the cold of winter.

"The genetics technology is cutting-edge, and it's all thanks to Hopkins' preservation technique," says Sheppard. 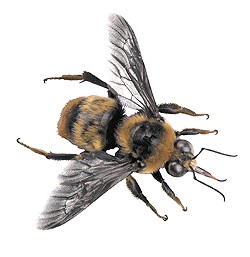 He explains that the bee-breeding project began in 2000. Hopkins joined the bee-breeding team in 2008 as a doctoral student. At the time, the breeding program struggled to gain access to more diverse bee genetic material. Sheppard says Hopkins started experimenting with freezing bee semen to tackle this issue. He explains that people had tried freezing bee semen in the 1980s and 1990s, but the process exposing the semen to liquid nitrogen ruined the delicate genetic material.

In 2011, Hopkins, then a post-doctoral researcher, developed a technique to slowly cool and prepare bee semen to be frozen in liquid nitrogen. After developing a reliable process, he could collect samples and ship them from anywhere across the world. Since then, he's collected honeybee semen from all over Europe.

"We can use that stuff for decades to come. You can mix up the perfect mix of bee genes and impregnate the queen with it. It almost sounds like it came out of science fiction," says Sheppard.

Megan Taylor, a doctoral candidate at WSU, worked with Hopkins on the project. Using the data Hopkins collected during the bee-breeding process, she compared the genetic diversity of American and European honeybees.

"Honeybees aren't native to America, and we banned the importation of new European bees in the 1920s to stop bringing diseases and pests from the old world. That was fine then, but now American bees have been genetically isolated for almost a century," Taylor says. "Look at how many agricultural disasters in history were driven by too much inbreeding. Some diversity could stave off a similar disaster with bees."

Taylor says that Europe's honeybee population was far more diverse, with 28 subspecies. Americans only started raising honeybees in the 1860s, and imported just three subspecies from Europe. Taylor says the introduction of the new male bee product could increase the genetic diversity in American honeybees.

"That genetic diversity could vastly improve the health of American bees," she says. ♦