A bomb threat, a fire and a "manifesto": Spokane County Democratic volunteers were afraid something like this would happen

olunteers with the Spokane County Democrats — at least some of them — have long been afraid that their activism would make them the targets of an extremist attack.

This morning it felt like their fears may have been realized.


"All I can confirm is the man walked into the [building] and said he had a bomb," says Spokane Police Department spokeswoman Julie Humphreys. "He was able to somehow detain one or more employees or volunteers."

That building, says Nicole Bishop, chair of the Spokane County Democrats, is the Teamster's union hall where the local Democrats' offices are headquartered.

"He handed a document to one of our volunteers," Bishop says.

"He said, 'I want you to read this," that volunteer, 78-year-old Shirley Grossman, told KHQ news. "I tried to read it and my mind was not working very well obviously. It said something about the Democratic and Republican Party and more stuff. He said, 'do you understand what this says?' And I said 'No, I can't get it.' He took the paper back and said, 'Is there anybody else there?'"

The device did not appear to have successfully detonated, but police spokesman Terry Preuninger says that the suspect's actions did appear to ignite a small fire that fizzled by the time the fire department arrived.

He also says the suspect did "detain one male employee for a short time" but that the suspect surrendered peacefully when police arrived.

So far, though, the police department has declined to reveal anything more, including the name of the suspect or whether they believe he intentionally targeted the Democrats, the Teamsters or another group with offices in the building.

Last year, a heated internal battle broke out among the Democrats over whether to pass a resolution condemning specific far-right, white supremacist or extremist groups. While many in the party saw the resolution as a moral imperative, several volunteers in leadership worried it could put their lives in danger.

"My back is to the front door of the office," Mary Winkes, the party's former state committeewoman, told the Inlander earlier this year. "And I didn't want the Proud Boys or somebody else busting in and shooting me because they were mentioned in some resolution."
click to enlarge

Lorilee Gill, courtesy of the Spokane County Democrats.
The Teamster Building, where a man confronted volunteers with a bomb threat and a manifesto

But Bishop doesn't believe today's scare was related to anything specific to actions from the local party at this point.

"Because of COVID, our party has been fairly quiet," Bishop says.

It's far more likely, she says, that if there's a political connection, it's related to the contentious national election.

"This may have happened regardless," Bishop says. "I don’t know if that’s an indication that we need to shy away from naming hate groups or militia groups, because they’re clearly active regardless."

Lorilee Gill, who had spent five years volunteering as the party's director of operations, says that the potential threat of violence is always something that their volunteers have to face, especially around election time.

The same thing was true when the Democrats were in their old offices on Third Avenue, she says.


"We've had times where we have to lock the doors and turn the lights off and tell the volunteers, 'You're not to sit out on the front desk,'" Gill says. "I’ve been down there at midnight doing PDC reporting, and I’d had someone in the parking lot flashing their highs at me.... Doing my civic duty should not be putting you in jeopardy. It should not be putting me in harm's way."

These concerns became a part of volunteer training, she says.

"'What should you do?'" Gill says. "How can you get out of here if someone comes in the front of the building? ... Where do you meet? Pick the phone up, dial 911 and tell me if there’s an emergency."

Most of these volunteers, she notes, are women over 60 years old.


"Some were over 80. I had a woman on crutches. How do I get her out of the building if there’s a bomb?" Gill says. "When somebody comes in like that, they come in thinking they're talking to a larger organization, not realizing these are people, you know. We're just all people. We're all doing what we think is good for the community."

She says got a call today from the owner of the Teamsters' building, asking her about who to talk to about insurance questions to deal with the damage from the smoke and the fire department breaking a window.


This isn't the only apparent recent bomb-related incident in Spokane. Thanksgiving week, a man named Jermain Wakefield called 911 and falsely claimed that he had placed multiple bombs at the local Planned Parenthood office, just two blocks away from the Democratic headquarters.

Paul Dillon, spokesman for Planned Parenthood of Greater Washington and North Idaho, says in today's case, the suspect seems to have been more organized than the person who threatened them.


"Obviously the media attention that was given to the bomb threat, we certainly worry about copy cats, that being a factor," Dillon says.


National figures on both sides of the political aisle have been horrified by the way that President Donald Trump and other right-wing figures have been stoking extremism with their wild claims of a stolen election.

“When the president and various prominent Republicans are out telling people the election is stolen, various people are committing treason, and the people need to rise up — some crazy MF’er is going to do it eventually,” writes Erick Erickson, a right-wing Georgia-based talk show host who voted for Trump this year.

"I think the person that called in the bomb threat was on a downward spiral," Dillon says. "You can’t separate the rhetoric from these acts. You are deluged with the distortion and conspiracy theories. And something snaps and that’s what causes people to carry out these destructive acts. You hit a breaking point."

It's far too soon to know the motivation of the suspect. 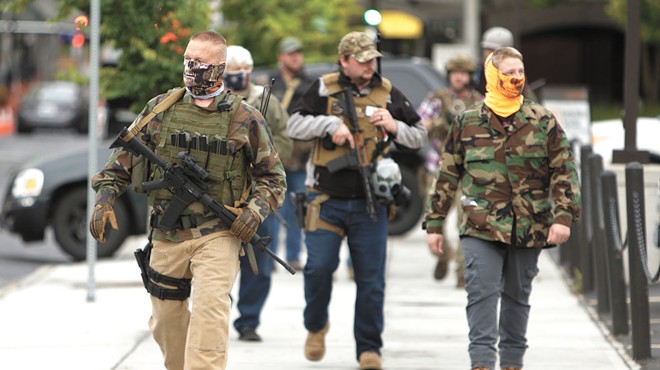 
After Arizona's U.S. Rep. Gabrielle Giffords' was shot by a gunman, some observers blamed over-the-top national rhetoric from Republicans. But an investigation found that the gunman, who suffered from paranoid schizophrenia, had been obsessed with Giffords for years and little evidence tied his actions to the national rhetoric.

Still, the Inland Northwest has a grim history of extremist bombings, carried out by white supremacist groups like The Order. Historically, extremists have detonated bombs at Spokane City Hall, a local bank branch, and a Planned Parenthood clinic. In 2011, an extremist tried to blow up a backpack bomb made of gun-powder, fishing weights and rat poison at a Martin Luther King Jr. parade.

"We are so relieved that no one was harmed in this reprehensible act of violence. Our primary concern is for the safety of our volunteers and the broader community of Spokane. We urge every elected official and community leader to join us in condemning this apparently politically motivated act of violence. No one should have to fear for their life simply because they participate in our political process."