Ride your bike to St. George's to enjoy "Cycling Music" in the sunshine. 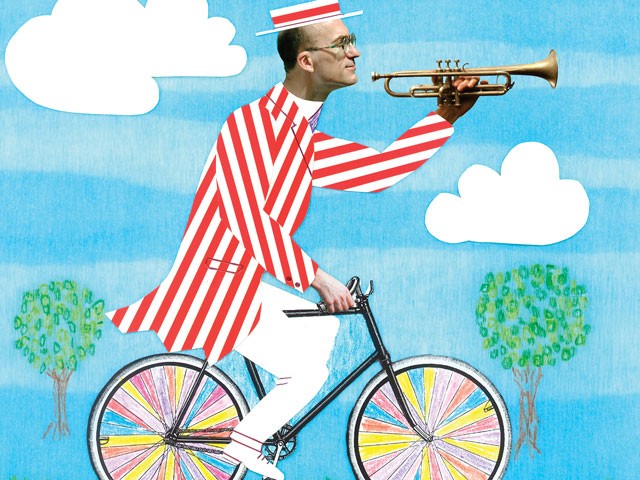 Clarion has put on successful Christmas concerts for years, so William Berry — composer and guiding light of the brass ensemble — thought to himself, “Why not have a summer solstice concert?” But with minimal advertising in advance of this Sunday’s brass-band-on-the-greensward concert, how many people does Berry expect to show up?

“Well, I expect the entire band to be there,” he says, deadpan.

But there’s room for only 240 vehicles in the St. George’s School parking lot. And since Berry is an avid cyclist himself, that’s why there’s a kind of surcharge for driving your car out to where Louis Davenport had his summer home, out on the St. George’s campus.

“It’s kind of like the concept of the old days, in factory towns, when everybody would get away in the summer from all the grit and grime and travel out of town to a nice bucolic spot — like Seurat’s painting of the Island of La Grande Jatte, you go out to the countryside,” Berry says. “We’re expecting picnickers — about 800 or a thousand people would be the max — and a fairly exclusive crowd. It won’t be like Woodstock, where people will be crawling all over each other. Elite and sophisticated folks, in other words. I don’t think the Hell’s Angels have made their reservations yet.”

The featured work in the first half of Sunday’s afternoon concert will be “Cycling Music” — Berry’s 2004 concerto for trumpet and brass choir — which he describes as “light summer music, not heavy listening.” It’s written, as are all of Berry’s original compositions for Clarion, for 12 brass players and one percussionist, to be conducted by Robert Spittal of Gonzaga’s music department.

The opening movement — “RHR 48,” for “Resting Heart Rate” — represents “the calm you get from being in good cardiovascular shape,” Berry says. The second movement is named for Cooper Jones, the 13-year-old cyclist who was killed in 1997 during a cyclists’ time trial on the Cheney- Spokane Road. The music, Berry says, “is very tense and stressful, as if somebody is riding a race — and then ends with a funeral march.”

The third movement, “a fanfare that starts slow and really builds,” is entitled “October 2nd” in memory of the day in 1996 when Lance Armstrong was diagnosed with cancer. And the concluding movement of the 12-minute piece is “Flying,” which Berry describes as “very repetitive, almost minimalist — it’s about when you’re cycling in a groove, way out there on country roads.”

In addition to “Cycling Music,” the first half of Saturday’s program will include “more traditional and serious” music, Berry says, like “Nimrod” from Sir Edward Elgar’s Enigma Variations, in addition to a chorus (“With cat-like tread”) from The Pirates of Penzance by Gilbert and Sullivan, and the “March to the Scaffold” from Hector Berlioz’s Symphonie fantastique.

After intermission, the musical weather will turn partly poppy with a chance of whimsy: Listeners will hear “Walk Like an Egyptian,” “Ghost Riders in the Sky,” and a version of George Gershwin’s “Summertime” in “an off-kilter swing version with different time signatures,” Berry says. There will even be some John Philip Sousa music and a springtime version of “Greensleeves” that will feature trumpeter Andy Plamondon in, Berry says, “a sort of Renaissance jazz solo.”

Putting on a concert on the St. George’s campus, Berry says, is like “entering a kind of fantasy land — you can just imagine all the rich people in all those cars from the 1920s, with the men in boater hats and the women in their flapper outfits.”

With Clarion now adding a summer concert to its wintertime event, maybe we can expect an even more extensive season. “An April Fool’s concert would be our next choice,” Berry says, jokingly. But then he turns more serious: “Truly, I want to do fun stuff and high art — stretch the limits of what brass choir can do,” he says. “This is not about making money. It’s about doing the best I can as a composer, creating all new stuff for the great players we have here. I hope that translates into people showing up and getting blown away — because you won’t get music like this anywhere else.”