'A Claim of Actual Prejudice' 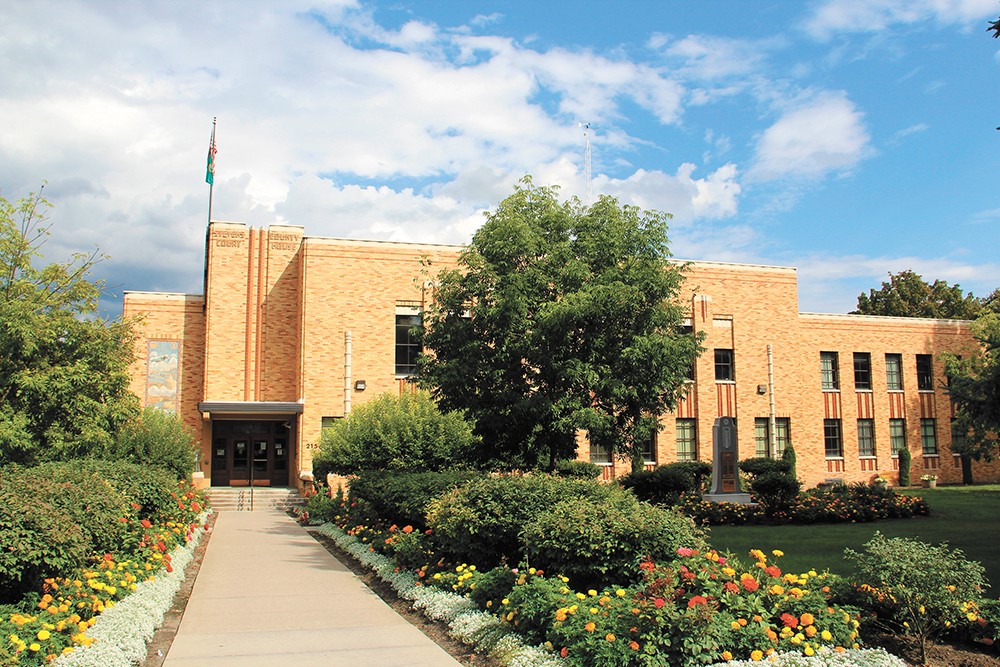 C Hanchey
The Stevens County Courthouse handles cases for the entire county of about 45,000 people.

No one believed that Craig Noll deserved jail time — no one, that is, besides the judge deciding his fate last month. The judge in question, Lloyd Nickel, had been assigned to fill in at the Stevens County District Court because the usual judge happened to be the victim in the Noll case.

What happened next is extraordinary, Noll's attorney and the county's prosecutor agree. Noll, a 33-year-old autistic man with no criminal record, was sentenced to 364 days in jail — the harshest possible sentence a district court can mete out — for what amounted to a roadside dispute with Stevens County's only district court judge, Gina Tveit.

The unusually harsh sentence has attorneys on both sides of the case crying foul, alleging that Tveit tipped the scales of justice to punish someone for a road rage incident. While Tveit didn't rule on her own case, attorneys say she's friends with Judge Nickel, who did. Tveit says they have a "professional" relationship.

"The fairness of our justice system depends on an independent, unbiased judge," says Stevens County Prosecutor Tim Rasmussen, who asked a different office to handle the case to avoid a conflict of interest. "This is critical to our system of justice."

During his time as prosecutor, Rasmussen says he's never seen such a lengthy sentence for this type of crime, "let alone on a person without any criminal history."

Rasmussen has taken his criticism of Tveit further, saying the Noll sentence is part of a larger pattern of problems with the district court during Tveit's tenure. He points to three convictions that were ultimately overturned, as well as letters from the Defender Initiative at Seattle University saying Tveit violated the rights of poor people.

For her part, Tveit dismisses the criticisms as being politically motivated.

"I have been personally attacked by Tim Rasmussen for years," she says. "As the elected District Court judge, I choose to maintain my integrity and focus on the duties and responsibilities of my office, rather than to engage in conflict with him. At some point, perhaps Tim Rasmussen should be called upon to explain his behavior and the use of his office to further his personal agenda to the citizens of Stevens County."

Last November, Noll suddenly stopped his pickup truck in the middle of Highway 395, right in front of Tveit's Cadillac Escalade. He got out and moved toward her, screaming profanities and flipping her off. Tveit drove around him and called 911.

When police pulled him over, Noll began yelling at officers to shoot him. One officer fired his Taser, shocking Noll, before taking him into custody.

By May, Noll's defense attorney, Brendan Kidd, and the prosecutor worked out a deal. Prosecutor Ashley Stetson recommended that Noll spend two years on probation and continue with mental health counseling.

But before Nickel could hand down a sentence, Kidd, the defense attorney, asked for the judge to step down from the case. The fact that Nickel ordered the investigation was extremely unusual, Kidd says. Adding to Kidd's uneasiness was the fact that Tveit was sitting in the courtroom when Noll pleaded guilty.

"Judge Tveit was present sitting in the gallery for the hearing, and I believe that Judge Nickel was looking in her direction in a manner that suggested that he was seeking her approval," Kidd writes in a sworn statement asking Nickel to remove himself from the case.

Tveit acknowledges that she was in the courtroom, but says the claims that she influenced Nickel's decision are "ridiculous ... with absolutely no factual basis." As the victim in the case, she says, she had every right to be there.

"I was very interested in hearing from Mr. Noll what happened, and why," she says. "He didn't answer those questions, so I didn't get those answers."

At Noll's sentencing hearing in July, Nickel refused to step down, saying the request wasn't filed in time for him to thoroughly consider it. He then scolded Kidd for refusing to allow Noll to answer questions for the pre-sentence investigation, and denied requests to allow Noll's therapist to call into the court by phone. Even a letter from Noll's therapist didn't seem to matter.

"I wanted to make a fully informed decision two months ago, and you advised your client not to cooperate in that process," Nickel said to Kidd in court. "So I don't see where anything has changed. This letter indicates to me that he's functional, and so that time in jail is not going to impact him or his treatment." 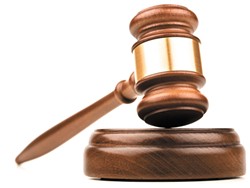 Nickel sentenced Noll to 364 days (suspending 30 of them). He cited examples of Noll's erratic behavior with police, documented in the probation officer's investigation.

"I haven't had a case with a similar fact pattern who has gotten that much jail time in the past," says Stetson, the prosecutor.

Noll was booked into jail from the courtroom that day. And for five days while he was locked in the Stevens County Jail, he didn't eat, according to Kidd.

"A truly biased judge will do exactly what was done here; find any procedural loophole, no matter how tenuous, and regardless of the fact that the state was not objecting, to avoid addressing the merits of a claim of actual prejudice," Kidd writes, appealing the judge's sentence.

The Noll case isn't the first time that Tveit and Rasmussen have been at odds. She worked for him as a deputy prosecutor in Stevens County until her appointment to the bench in 2009. Tension between the two bubbled below the surface for years. It cropped up in 2013, before Tveit's second election.

At that time, Tveit had apparently directed deputy prosecutors to speak with defendants accused of violating probation, who were not represented by an attorney.

In an email to Rasmussen in January 2013, Tveit explains that appointing defense attorneys early in the process could cost the county too much money.

"One of my primary concerns is the impact that these changes will have on the county and city budgets," Tveit writes. "Today, your deputy prosecutor stated that his office will now request an attorney be appointed in all probation violation cases for every defendant."

"There is a simple solution to this problem," he wrote. "Either appoint counsel to represent indigent persons charged with probation violations or do a proper waiver of counsel with defendants so the deputies can talk with them."

By February 2013, Rasmussen had reached out to Seattle University professor Robert Boruchowitz, director of the school's Defender Initiative.

In a letter to Tveit, Boruchowitz explains that he's listened to recordings of hearings in her courtroom, and identified at least three examples where she violated state court rules.

In one instance from February 2013, Boruchowitz says, Tveit questioned a woman about the circumstances of her alleged probation violation without a defense attorney present, and without telling the woman that she has the right to an attorney.

"The questioning by the Court of the defendant should not have occurred without appointment of counsel or proper waiver of counsel," Boruchowitz writes.

Today, Tveit says she's never refused to appoint defense attorneys for those who cannot afford one. But, she says, "there are no set rules regarding assignment of counsel on the first appearance in a district court probation violation," and the discretion comes down to resources.

"In a perfect world there's a defense attorney for every defendant in every courtroom," she says. "But that's not the reality, especially for rural counties."

From August 2013 to August 2014, Stevens County prosecutors won five guilty verdicts. By September of 2014, Rasmussen was concerned that the defendants' rights to a public trial had been ignored. In an unusual move, he requested that all five guilty verdicts be reexamined because lawyers for both sides had not been given questionnaires filled out by potential jurors containing basic information, such as employment and criminal history.

Spokane County District Court Judge Aimee Maurer was tapped to review three of the cases. (Two defendants declined to have their cases reexamined.) Maurer agreed with Rasmussen's concern and threw out the convictions.

Especially troubling, Maurer writes in her decision, is that only prosecutors, and not defense attorneys, were alerted to the fact that the questionnaires were no longer being provided.

Nadine Borders, the Stevens County District Court Administrator who decided to stop providing questionnaires to attorneys, writes in a sworn statement that her decision was based on practices in other courts to keep jurors' personal information private.

She also notes that neither defense attorneys nor prosecutors asked for the questionnaires for nearly a year.

Nick Force, a Stevens County deputy prosecutor who handled two of the reversed cases, says information on juror questionnaires, such as employment and criminal history, is invaluable for selecting a jury.

He adds that the conviction reversals, and the steps to fix them, wasted huge amounts of time and money for his office, as well as for the defendants.

"It was a lot of added expense, and the defendants had to take more time off work, and actively be in court," he says. "They already had to go through the system once. If things are prejudicial to the state, we don't care so much. But what we do care about is whether a defendant gets a fair shake. They already have so many things working against them."

Noll is currently out of jail while he awaits a decision on his appeal. In court documents, Kidd calls the entire case a "miscarriage of justice."

Tveit maintains that she did not meddle in the case, and emphasizes that her relationship with Nickel is simply "professional."

She believes the fact that Rasmussen is talking about the Noll case ahead of her next election is more evidence of a personal vendetta against her.

"There's no cookie cutter for a judge," she says. "What I've found is when I have questions for other judges on how they handle certain situations, I will get 10 different answers. Depending on the circumstances, who's to say what's appropriate? From county to county and judge to judge, you can't hardly find consistency in the details and procedures."

"I have an obligation to the citizenry," he says. "A prosecutor has to protect the rights of the accused. I feel strongly that I have to look after the rights of people engaged with the judicial system. The rules are there to be followed, and when they aren't, someone should say something about it. And I try to." ♦

Sneak Peek: Vigilantes in America, laughter during a pandemic, remembering John Lewis, the NBA and more!