Omnivorous, prolific and unflinchingly honest, writer David Shields visits the University of Idaho with 20 titles to his credit 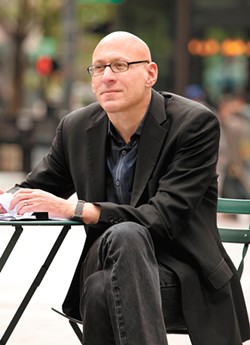 There's a moment at the beginning

of I Think You're Totally Wrong: A Quarrel, James Franco's 2014 documentary on writer David Shields, that could put you off the whole enterprise altogether. "It's an ancient tradition... two psyches argue," Shields muses, echoes of Woody Allen in his didactic tenor, pausing for maximum effect, "...and I wanted someone to argue with me... about my life."

It's then that you know what you're in for: an hour and 28 minutes of Shields solipsizing with former student Caleb Powell on a weekend retreat where the viewer is promised nice footage of the Cascades and beer consumption, but also the very real and ominous possibility of James Franco dropping in.

Based on scenes from the documentary, it would be easy to write Shields off as a grandiose, self-referential academic. But Shields, who visits Moscow next Wednesday as part of the University of Idaho's Distinguished Visiting Writer program, is also an omnivorous cultural critic and a compelling voice in favor of new and emerging forms of narrative that accurately capture what it's like to be living now.

In his 20 titles, including The Thing About Life Is That One Day You'll Be Dead, How Literature Saved My Life, Black Planet and Reality Hunger, Shields argues that the literature of the future is being born digital, won't be in the form of the novel, and will rely on unflinching, often unflattering, authenticity in order to stay relevant. His latest, Other People: Takes & Mistakes, is a collection of not only essays, but aphorisms and fragments that reveal Shields to be an enthusiastic consumer of the kinds of performance that tell us who we are: Bill Murray's jaded hope in Rushmore, the soothing smarm of radio host Delilah, George W. Bush's entire fumbling presidency.

Although Shields clearly possesses a fierce intellect and is rumored to enjoy a good (verbal) fight, it's our flaws and weaknesses that he finds the most interesting, and in this department he gives as good as he gets. Unafraid to write about his own cowardice, prejudice and schadenfreude, Other People is Shields at his most relatable. In a chapter where he responds to early critics of his work and its self-absorption, he is all of us:

"Doesn't everybody have a pitiable heart? Aren't we all Bozos on this bus?" ♦