Chef Rod Jessick's health is looking up, just as his food is gaining wider notice 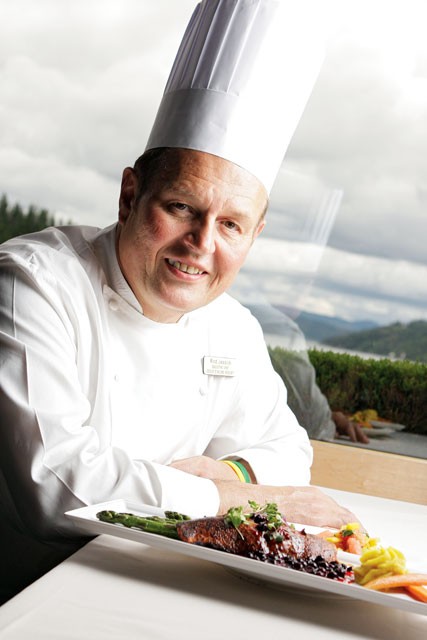 Young Kwak
During his 20 years with the Coeur dAlene Resort — and the North Shore for years before that — Chef Jessick has held just about every job available.

This is prime “lake time” in the Inland Northwest. While the sandy shores of Coeur d’Alene’s edge beckon us to come rest, relax and play, local restaurants gear up to feed the hungry sun worshippers. In the Lake City, Rod Jessick is executive chef of the Coeur d’Alene Resort, and he consults with all of Hagadone Hospitality’s restaurants: Dockside, Cedar’s Floating Restaurant, Tito Macaroni’s, Bonsai Bistro, Beverly’s and the Beachhouse.

“You won’t find me on the beach this time of year,” he says, smiling.

Jessick’s culinary career started at age 12 with an attempt to make a cake for his mom, who worked at a truck stop in Post Falls. “I had watched her make them and just knew I could do it,” he recalls. “I put all ingredients in a large Hamilton Beach mixer, turned it on high speed and things got going too fast!”

Quickly placing a rubber spatula in the mixer stopped the action and bent the beaters. After that, his mom’s boss kindly allowed him to peel potatoes and sweep floors to earn money to pay for the damage. Every summer he returned to the truck stop, and by his senior year in high school he worked there full time, on graveyard shift, saving money for college.

Next, Jessick moved on to a dishwasher position at the North Shore Motor Hotel, in Coeur d’Alene. There, he progressed to pantry cook, line cook, banquet chef, Cloud 9 chef, and executive chef. When the hotel was purchased by Duane Hagadone, Chef Jessick was asked to write all of the menus for the new Coeur d’Alene Resort.

“When it opened, I was Beverly’s Chef de Cuisine,” he says. “We did not have an executive chef until after we opened, and I applied and was given the opportunity of a lifetime.” He has now been there for more than 20 years.

Beyond his cake-making mishap as a kid, Chef Jessick credits his passion for food to his mom. “When food was in her hands, it was always magic to watch,” he says. “I am sure that is what got me hooked.

“My fondest memories are of her, with funny glasses on, reading recipes and making notes. I am sure this is where my love of cookbooks started, too. Now I wear the funny glasses to see.”

Speaking of cookbooks, Jessick’s office is filled with them — he has been collecting for 40 years.

“I have been told I should join Cookbooks Anonymous,” he says, laughing. “Chefs are creative artists who express themselves through food. Each book is an expression of the food at that moment in time. To hold a cookbook is to feel the past, present and future of food.”

In recent years, personal health has affected Chef Jessick’s cooking. “I had a summer cold 15 years ago and dropped by to see my nurse practitioner,” he says. “I left that office diagnosed with Type II diabetes, obesity and elevated blood pressure.”

Not wanting to be placed on medications, Jessick took his health seriously and sensibly. He shed more than 80 pounds and focused on better health. “It takes time relearn how to eat, and what works for your own body,” he says. “I set a goal to do Bloomsday less than one hour; 63 minutes was my best ever time.”

After watching the Ironman in Coeur d’Alene, he was curious if his heart was strong enough to do a triathlon before turning 50, so he scheduled a stress test with cardiologist Dr. Dennis Cooke. He left that appointment with a diagnosis of atrial fibrillation, learning his heart was pumping at only 40 to 45 percent of normal.

“Thank goodness I checked — and I always thought it was great being a chef and having a primary doctor named Cooke!” he says. “Needless to say he did not encourage me to do a triathlon.”

Later that year on a trip to Montana to get hay, a virus attacked his heart. His heart’s pumping capacity had further declined.

“I was on a transplant list for two months while waiting for the drugs to work,” he says. “Slowly my heart got better and a defibrillator was put in. During this whole time I continued to work out with a trainer and eat healthy. Eighteen months ago, I woke up feeling better than I had felt in years. Doctor Cooke told me the best news I could hear: My heart was now pumping normally, though I still have ‘atril fib,’ and just this week I had my defibrillator removed… I am a lucky man. Life is a gift.”

Today Jessick still has diabetes. He says, “My blood sugar is under control. I continue to work with a trainer because I need the help and push. It would be easy to just give up, but with the good fortune I have had, I do not intend to give up now. I intend to live life and enjoy every day as the gift that it is.”

The recipe Chef Jessick shares was included in new book called Hooks, Lies & Alibis by John Folse, one of Louisiana’s finest chefs, featuring contributions from several chefs from around the country who participated in a New Orleans charity event. The book is billed as “Louisiana’s Authoritative Collection of Game Fish and Seafood Cookery.”

“It was an honor just to have been included in the book,” Jessick adds.

Preheat oven to 250ºF. Spray baking sheet with non-stick cooking spray. Heat olive oil in a large sauté pan over medium-high heat. Rub each salmon fillet with spice rub on both sides. Once oil is hot, sauté each fillet 5-8 minutes or until golden brown, turning once. Work in batches. Transfer to prepared baking sheet and place in oven to warm. Serve salmon with Idaho huckleberry sauce.

Combine all ingredients, blend well and place in a tightly covered jar; use as needed.

In a small saucepan, combine 1 cup of water with sugar, ginger, chili paste and red pepper flakes and bring to boil over medium-high heat. Dissolve ClearJel in 2 tbs of water and add to boiling mixture. Cook until thick and clear. Remove from heat and add huckleberries, folding them gently into sauce. Set aside and keep warm.