A Death in the Rain 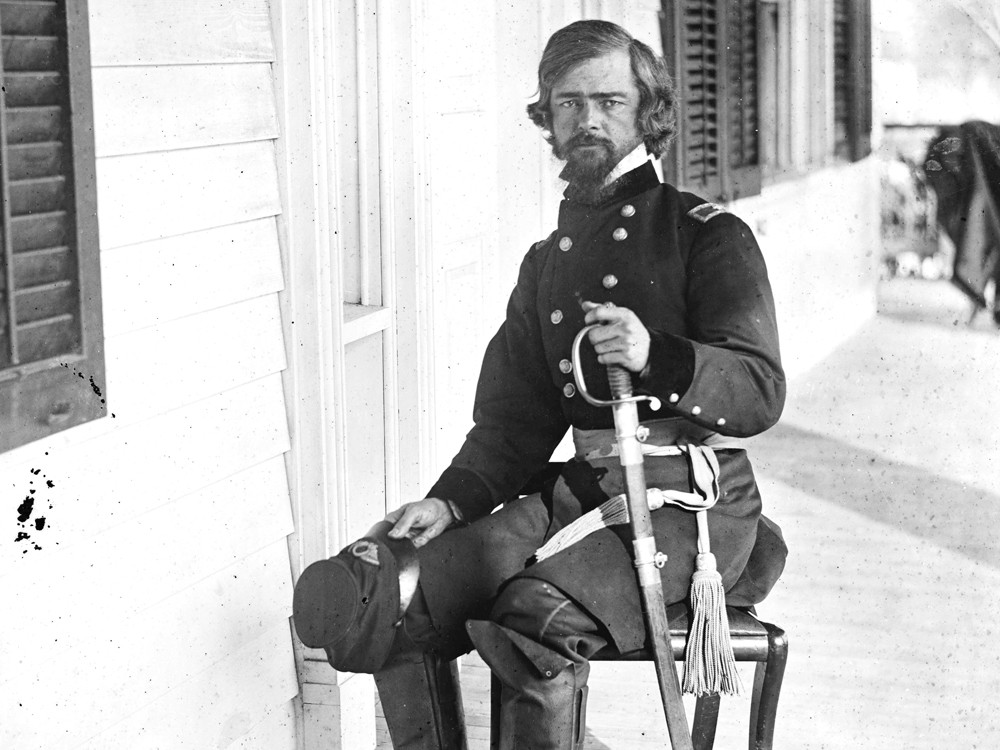 This photograph of Isaac Stevens was taken shortly after his promotion to brigadier general in fall 1861.

As Washington Territory’s first governor and superintendent of Indian Affairs, then their first representative to the U.S. Congress, Isaac Ingalls Stevens spent most the 1850s cutting a sometimes contentious swath through the Northwest’s early history. But in April 1861, as Stevens returned to the Territory for a new round of political wars, a much larger conflict exploded into reality at Fort Sumter, South Carolina.

Within a few weeks, the Massachusetts-born Democrat and West Point graduate was seeking a commission in the Union Army. In June he departed Washington Territory for Washington, D.C.; by September, he had been promoted to brigadier general. The following summer Stevens found himself in Virginia, helping to parry the thrusts of his former Corps of Engineers and Mexican War compatriot Robert E. Lee.

On Aug. 31, 1862, after Major General John Pope’s defeat at the Second Battle of Bull Run, Stevens was assigned to guard the rear of the Union retreat. Suspicious of Lee’s failure to order an advance against the exposed troops, Stevens predicted that the Confederates “would likely move around and strike us under the ribs.” On the morning of Sept. 1, scouts returned from the hamlet of Chantilly (near the modern town of Fairfax, Va.) with a report that Stonewall Jackson, supported by a corps of 70 regiments, was indeed curling toward the wagon road that formed the main Union escape route.

Stevens immediately directed the 79th Highlanders regiment, whose numbers included his 20-year-old son, Captain Hazard Stevens, to flush out the enemy while he formed the rest of his corps into position. When Jackson’s Confederate troops opened fire from behind a rail fence at the edge of the woods below Ox Hill, Hazard went down with shots in his hip and arm, but the Highlanders pressed on.

A few moments later, General Stevens came upon his wounded son. After arranging for the captain to be sent to the rear, he remained on the battle line in spite of pleas to fall back. A heavy force of Confederates appeared on the field, pouring a withering fire into the advancing bluecoats. When one of a succession of his color-bearers fell, General Stevens pushed to the front and took up the fallen flag, calling for a counterattack.

While the fighting raged, a violent thunderstorm driven by powerful winds swept across the field. “The roll of musketry and the roar of cannon left all of us unmoved,” wrote one private from Massachusetts in the middle of the action. “But the crash of thunder and the vividness of the lightning, whose blinding flashes seemed to be in our very midst, caused uneasiness and disturbance among some of the bravest men.”

Weather reports for the area show that more than an inch of rain fell that afternoon, accompanied by high winds; it was one of the few engagements of the Civil War fought in a full-on downpour.

As Isaac Stevens led his men toward the rail fence that marked the enemy’s position, a bullet pierced his skull and killed the 44-year-old former governor instantly. “He still firmly grasped the flag-staff,” another eyewitness recounted, “and the colors had fallen upon his head and shoulders.”

Meanwhile, not realizing that his troops far outnumbered the Union forces at hand, Stonewall Jackson withdrew a short distance to rally and consolidate his scattered division for a fresh assault the next day.

After the skirmish calmed, a lieutenant sent word to division headquarters that the enemy had been repulsed and that Stevens was dead. A return message instructed the men to bury the general before falling back. The 79th Highlanders, a New York regiment that had been Steven’s initial command, “were very indignant at orders to bury the body of our beloved General on the field.” They instead carried Stevens to the rear and placed his body in an ambulance, from which a wounded Highlander “gladly and self-devotedly got out to make room, and sent the sacred remains to Washington.”

Confederate General James Longstreet later wrote that General Stevens, by acting quickly and decisively, had held Jackson at bay long enough to insure the Union retreat. At the end of his report, Longstreet graciously compared the headstrong Washington governor to the legendary Stonewall: “In his short career [Stevens] gave evidence of courage, judgement, skill, and genius not far below his illustrious antagonist.”

The Boy in the Picture