A Desire to Help 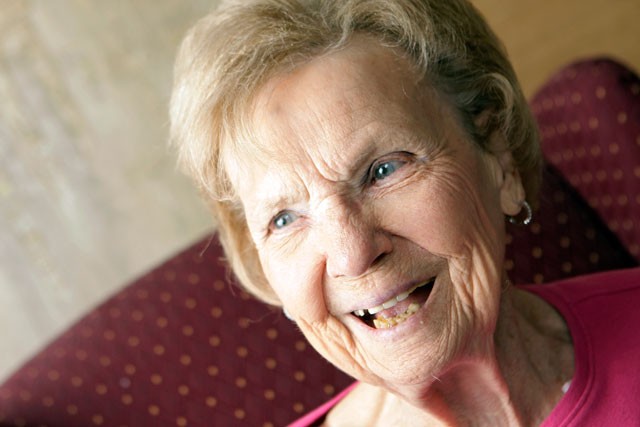 There haven’t been a lot of things that have stood in Anna Mae Ericksen’s way. You could argue that Ericksen, who recently celebrated her 90th birthday at a party with more than 200 guests, has been one of the most influential developers of Spokane’s thriving medical industry. But you wouldn’t really need to argue — there aren’t many who’d disagree.

Since graduating from Rogers High School in 1939, Ericksen devoted her life to nursing. She served in the United States Army Nurse Corps in World War II. She founded Deaconess Medical Center’s emergency room and started the local and statewide Poison Centers, among many, many other programs.

Her work and innovation have been recognized by four Washington governors and a U.S. President. The list of awards she’s earned runs for pages at the back of her resumé. She still wins awards — but these days, she’s become the kind of person who has awards named after her.

“I never, ever thought of ever doing anything else,” she says of her nursing career, which spanned 40 years. “I loved going to work. I don’t think there was a day that I didn’t enjoy going on the job, never knowing what was going to happen.”

Today, she sits in a big, cushy armchair in her South Spokane home — a small home that, only days after Thanksgiving, is filled with holiday decorations, poinsettias and Christmas cookies. She wears a pink holiday sweatshirt decorated with sequined snowmen today, her manicured nails apple-red. She’s frail, but far from weak-spirited. As she recreates stories from her long career, Ericksen shows her gift for storytelling: widening her eyes as she talks, dotting her stories with comedic pauses for laughter. She’s compelling to watch and riveting to listen to.

Just by the way she talks, it’s clear that Ericksen thrives on excitement — and the timeline of her career shows that.

“I liked the unexpected,” she says. “I liked to not know what was coming in when I went to work at Deac.”

When she came back to Deaconess in the late 1940s, she learned fast that something needed to be done about its emergency room.

“We had a small room with a bed, just an iron bed that was narrow with a thin mattress,” she says. “That’s how I got the emergency room. I had this one room with this one bed that I couldn’t even put the patients in ‘shock position’ in. I said ‘How do I do this?’”

So she fixed it. She talked carpenters into building new beds. She convinced administrators to knock out walls and expand the ER. She showed nurses-in-training how to work under pressure, and ambulance drivers how to care for patients in-transit.

“The ambulance people — their model at that time was scoop and run,” Ericksen recalls about early EMTs. “You get to the accident, you pick them up and you run like hell.

“We needed to teach them that every patient that came in was special, and we needed to provide care for them,” she says.

Her work paved the way for Deaconess’ ER today, which is 25 rooms larger than when Ericksen started. The facility is now equipped to treat major and minor ailments, and has a telemedicine room — a space that connects Deaconess with 14 remote hospitals by video, enabling emergency specialists to work closely with the physicians in rural areas.

Later in her career, Ericksen found herself driving through small Washington border towns spreading the knowledge of the Spokane Poison Center — particularly its Mr. Yuck sticker program. Ericksen brought the national campaign, intended to deter children from poisonous substances, to Washington. At one point, she drove a car with a license plate that read “MRS YUCK”.

“I’ll always remember this. I was going up to the borderline towns in Washington to work with hospitals up there on the Yuck program. I took a wrong turn and ended up at the Canadian border,” she says. “This man came out of his little hut and looked at the license plate, started toward my car, looked again, and he said ‘My God, either you’re a terrible cook or your husband hates you.’”

She laughs: “So I had to explain to him, and I gave him some Yuck stickers.”

Her work with the ER, Rural Nurses Program, the Red Cross and other organizations earned her the nickname “Mother Superior” around the Deaconess hallways, she says.

“When I would come up with an idea, I would ask for a meeting with the hospital administrator. And he’d always say to me, ‘What have you got up your sleeve now?’” she says. “I was supported with all of the projects that I came up with.

“I guess ‘no’ was not an answer that I got very often,” she concludes. “I really didn’t.”

She tends to refer to Deaconess as “my beloved Deaconess” these days. She spent a good part of her life there, walking the halls and building up its offerings.

“They gave me a job, they supported me. The hospital supported me in everything,” she says.

When she recently had an emergency and was picked up by an ambulance, Ericksen scoffed when the drivers said she wouldn’t go to Deaconess.

“The ambulance drivers said ‘Deaconess is full. We’ll have to take you to Sacred Heart,’” she says, laughing. “I said, ‘No, you don’t!’”