A Desk of One's Own

The new art of working alone, together. 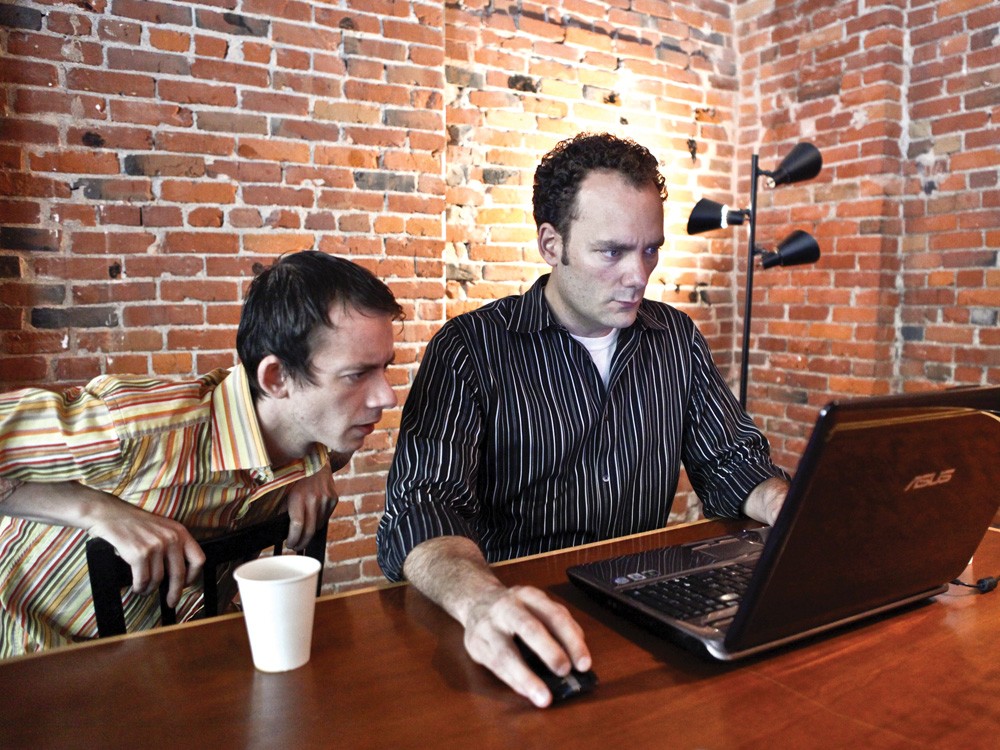 Jordan Beauchamp
Mark Simonds (right, with Jimmy Keesee) is looking for a 'good place to work, network, and be creative.'

Eric Iannelli needs help translating German. He’s working on a high-end coffee-table book about the ultra-luxe Mercedes SLS AMG E-Cell — a prototype electric car that has four engines and can go 0 to 60 in four seconds — to sell to the ultra-wealthy people who will eventually own them.

He needs a title for an article on the car’s battery, which is highly efficient and has excellent range but can still provide enough juice to the engines to generate tremendous torque and acceleration. The German title is “Kommando Kraftzell.”

He wants the English version to suggest independence and freedom. To “evoke militarism.”

“I can translate ‘Kraftzell’ as either ‘battery’ or, like, ‘energy cell,’” he says, broadening the search.

This gives Chris Reister an idea. A developer who has been silently coding away at a suite of scheduling software for chiropractors, Reister looks out from behind his MacBook Pro and says: “Maybe ‘elite energy cell,’ or something — like Special Forces … elite forces.” Mulling for a moment, Iannelli says that could work. When he sends the document off to his client later, it reads “Elite Force Energy Cell.”

This is the sort of collaboration you get at Jelly Spokane.

The bi-weekly “work-together” was begun in January by Mark Simonds, who owns the tech consultancy Simonds Consulting, and Jimmy Keessee, a web developer who owns CorpX.

Begun in New York in 2006, Jelly is the lowest-impact, most casual kind of “coworking” — a phenomenon in which people rent work spaces in a location that mimics a work environment (desks, coffee, Wi-Fi, office banter). The people here generally work at home, alone. Iannelli (who is also an Inlander contributor) heard about Jelly Spokane on Twitter. He came downtown to LaunchPadINW — where a recent Jelly was being held — for a change of pace. “I have a home office,” he says, “but I also have a 2- and a 4-year-old.”

Other forms of co-working are more permanent, offering desks, conference rooms and other amenities in exchange for a monthly membership charge. They also generally rent desks by the day (a service called “hot desking”), allowing freelancers or people on business a place to sit down, log in and get to work.

Simonds has been interested in starting a co-working space in Spokane since late 2009. He began Jelly with Keesee to help gauge interest. If the four to six people they’ve had attend each event signed on as monthly co-workers, Simonds says, it would be roughly enough to cover lease costs.

No one would be getting rich with four people — not like Independents Hall, a co-working space in Philadelphia that takes in nearly $15,000 a month in dues against $6,500 in rent and taxes — but Simonds says getting rich isn’t the point.

A few blocks away, near the corner of Main Avenue and Division Street, that’s exactly what’s happening.

The problem with teamwork, Sarah McGovern says, is the team part. As an interior designer, she says she loves working with other people — “the banter, the critical eye” — but she also likes to maintain control.

In a traditional work environment, she says, designers and other creatives are beholden to the group. Great ideas get whittled down by committee. “The reality of the team,” she says, “always sacrificed the integrity of the design.”

She founded her design firm, Milieu, after getting her masters at WSU in 2010, but being a one-person operation had its drawbacks. “Being in this office by myself sucked as bad as sitting in my basement in my pajamas,” she says.

She began planning what would become Design Collaborative as a way to duplicate the rich creative atmosphere of a traditional design workplace while maintaining control over her design work.

When it opens on Sept. 2, Design Collaborative will offer a variety of options for people, from daily drop-in hot-desking downstairs to dedicated workspaces on the second level. There are two private offices — with doors and everything — if you’re into that sort of thing.

For her part, McGovern will occupy a desk in the southeast corner of the main room, where she can be a part of the bustle, and also have a view of the pigeons.

McGovern says she had the idea of co-working before she knew what it was called, banging her head against business models without finding one that seemed possible. Then, last January, around the time Keesee and Simonds were starting Jelly, McGovern says, “I found this word — co-working — and everything sort of fell into place.”

The word led her to an international community of people who shared her ideas — not just about the nature of collaboration, but also the importance of independence.

Variety has something to do with it, too. Back at Jelly, Chris Reister, the software developer, says the benefits he gets from co-working at Jelly are basically the same as he gets at his day job. Unlike Simmons, Keesee, McGovern and Ianelli, Reister has a regular 9-to-5 gig — in an office, with a desk, coworkers and everything else.

From behind his lines of code, though, Reister says there’s something to be said for occasionally working at a different desk, with different coworkers.

“It’s nice to get out of the office,” he says — and into a different office.

Unions promise to protect workers, and the coronavirus is demanding they prove it

Report: Washington best state to work in, Idaho not so much