Unlike many of his peers, Wyatt Harris has never been too interested

in pursuing a four-year degree at a university.

Harris, wearing a camouflage New York Giants hat during his manufacturing class, says his path is simpler. He plans to graduate, spend a year or two learning his trade at the local community college, and then become a welder.

"My happy place is working with metal and being able to work with my hands," says Harris, a junior at Shadle Park High School.

More than likely, Harris will have a job waiting for him when he's ready. There are around 500 manufacturing companies in Spokane County with 120 currently available jobs, says regional labor economist Doug Tweedy. And the number of openings in manufacturing is projected to increase by 100 jobs every year for the next five years, he adds.

Schools in Spokane have recognized this, and now they're beginning to prepare kids to meet the demand. Automation at manufacturing facilities means employers are seeking more workers with skills beyond high school, but a four-year degree isn't always necessary. So now, local districts like Spokane Public Schools and Central Valley School District are creating programs designed for students who, like Harris, want manufacturing jobs.

The goal is to create more pathways for students to enter two-year programs or apprenticeships after high school, says Will Sarett, Spokane Public Schools director of Career & Technical Education. That, in turn, will help local manufacturing businesses struggling to find qualified employees.

"When we look at what our economy needs," Sarett says, "we're going to be really honest to kids about making sure kids know what's out there."

The jobs in manufacturing look different than they did in the past, says Tweedy. Automation has taken over some work, he says, but mostly labor-heavy work.

"I think manufacturing is one of those foundation industries that pays well, and that are good jobs, but sometimes kids and young adults need to become aware of the kinds of jobs in manufacturing," he says.

"There is a great demand [in Spokane], for sure," Christen says.

Christen, who is also a machining instructor at Spokane Community College, says that Wagstaff has run into the issue of needing more skilled workers. He says the company hired two students as interns straight out of a welding class at NEWTECH Skill Center, a school in Spokane focused on technical skills.

Spokane Public Schools' Sarett points out that only about 35 percent of jobs nationally will require a bachelor's degree by 2020, according to a 2013 study by Georgetown University, so most students don't need a four-year degree. As for the rest of the students?

"They need technical skills," he says. 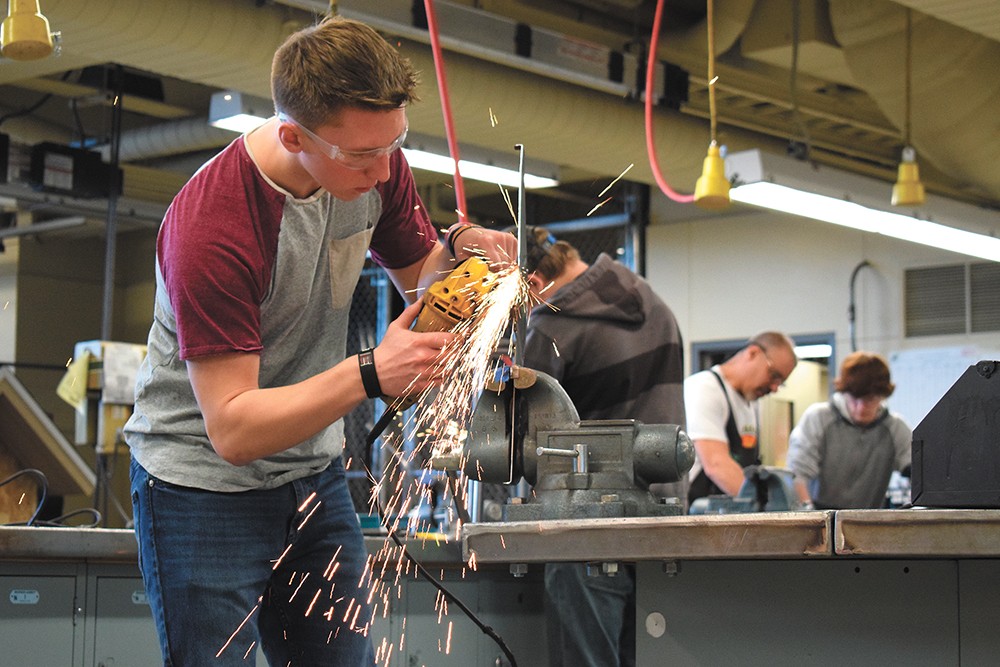 Wilson Criscione
Many students, like Ben Meredith, prefer working with their hands.

In the shop at Shadle Park High School, teacher Tony Anselmo walks around giving pointers to his students who are welding, as sparks shoot off the metal all around the room.

Harris builds a brass pen. Another student is welding what will eventually be a fire pit, while another says he is making an off-road go-kart. Many of these students plan to go into an apprenticeship program after high school, if they're not already in one now.

Spokane Public Schools has a goal called "T-2-4," which aims to give students a pathway to some sort of postsecondary education: a technical degree, a two-year degree or a four-year degree. With that in mind, the district is adding more classes that help students achieve those goals.

Last week, Spokane Public Schools' board of directors voted to add a material science class at North Central High School for students interested in agricultural manufacturing. Sarett says he would like to see the class expand to all high schools in Spokane eventually, after it kicks off in the 2017-18 school year. He says it could help meet the demand for the agricultural jobs widely available in North Idaho and Eastern Washington.

In 2014, Shadle Park added a class taught by Anselmo that does something similar. It's called a Boeing Core Plus class, an aerospace engineering course similar to Anselmo's manufacturing class but geared more toward building aircraft. There are roughly a couple of dozen classes like it in the state, but Shadle is one of the only comprehensive high schools with the Boeing course.

"[Boeing] is seeing a large wave of employees getting ready to retire," Anselmo says. "They're trying to get students to recognize that these are great careers with a living wage. They're trying to introduce this into high schools, so that when they do get to Boeing, they have baseline skills and knowledge to move forward."

Central Valley School District has goals similar to Spokane's T-2-4 program, says Susan Christenson, the district's Career & Technical Education director. Starting in eighth grade, students take a survey each year and do research to determine their interests and potential occupation. They are then told what education they would need to achieve those aims. Often, they realize that a four-year degree may not be necessary.

Central Valley has a manufacturing technology course and a robotics technology course. Christenson says CV students often go on field trips to businesses in the area to see what jobs are out there. The district is also getting students in elementary school involved in more hands-on activities.

She says a major challenge is communicating to parents that two-year and trade programs are good opportunities for students. She says that schools in the CV, West Valley, East Valley and Freeman districts have started an initiative to communicate that point.

"Even a lot of people who have looked at the research, they'll say, 'That's great for someone else's kid, but my kid is getting a [bachelor's] degree,'" Christenson says. "So somehow we need to get past that and look at what is best for kids, and what is best for the economy." ♦