Love, Simon is a warm, uplifting story about a gay teen's self-acceptance 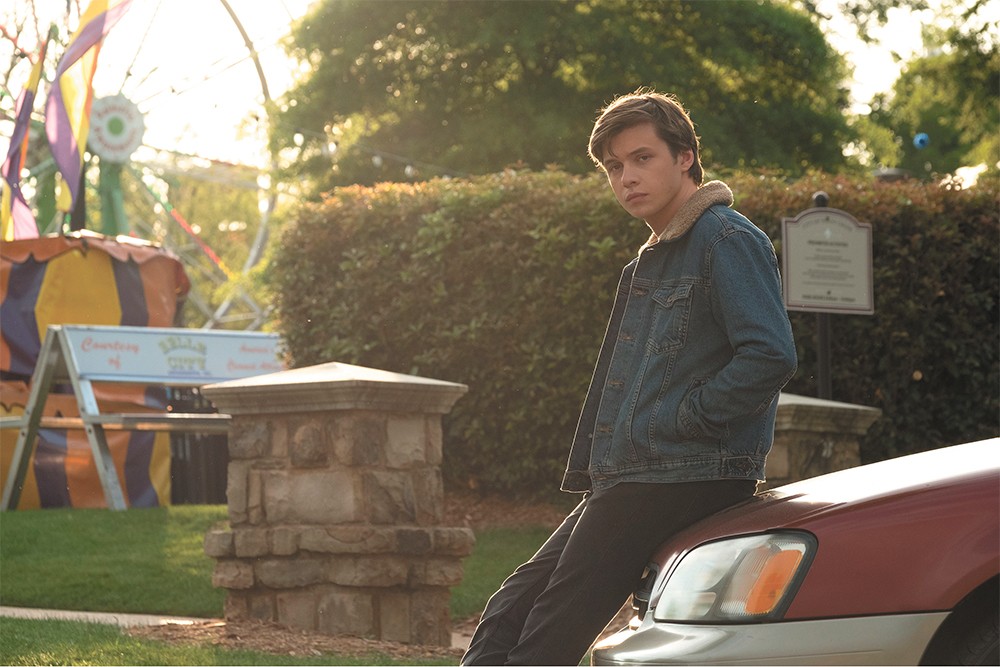 Nick Robinson plays a teenager grappling with his sexuality — and keeping it a secret — in the coming-out comedy Love, Simon.

Love, Simon is the first film about a gay teenager's coming out

ever distributed in wide release by a major studio. We've seen mainstream films with queer youth as supporting characters, and numerous coming-out centered films that played the arthouse circuit. But one of the majors (20th Century Fox, in this case) backing a sort of gay teenage romantic comedy, showing it in every multiplex in the country? That's new. And given the number of people now running Hollywood who were gay teens 20 to 40 years ago, it's surprising this is the first.

One of those gay former teens is Greg Berlanti, creator or producer of gay-friendly TV shows like Dawson's Creek, Everwood and Riverdale. His indie comedy The Broken Hearts Club (2000) was notable at the time for not being about important issues, with gay characters just living their lives. He's made one other movie since then, the (straight) rom-com Life as We Know It, and now returns to the big screen with the warm and fuzzy Love, Simon. Even though it's based on a novel by Becky Albertalli and adapted by This Is Us producer/writers Elizabeth Berger and Isaac Aptaker, it feels like a personal movie for Berlanti.

I mention all of this up front because there are a few fusty, out-of-touch moments in Love, Simon that remind you it was directed by a 45-year-old man whose own teen years were radically different from his protagonist's. It's altogether a friendly, old-fashioned movie, very tame in its depiction of burgeoning sexuality, without life-or-death melodrama or rejection — and that pleasantness can make it seem less revolutionary than it is, like it's the hundredth one of these, not the first.

Simon (Nick Robinson) narrates the story via emails he's writing to his pen pal, a fellow student at his school who came out anonymously on the school message board and calls himself Blue. Under the name Jacques, Simon has begun a correspondence with Blue, discussing their shared secret and falling in love. Meanwhile, of course, Simon is trying to figure out which of his classmates Blue is, plugging each new suspect into his imagination as he makes his guesses.

Simon hasn't come out to anyone but Blue. He hasn't told his lifelong best friend Leah (Katherine Langford), who has a crush on him that he doesn't see; or Abby (Alexandra Shipp), who's just been cast as the lead in the school musical; or Nick (Jorge Lendeborg Jr.), a soccer player who's in love with Abby. He hasn't told his loving, progressive parents (Jennifer Garner and Josh Duhamel) or his younger sister (Talitha Bateman).

His secret is threatened when another student, smart-mouthed busybody Martin (Logan Miller), discovers Simon's emails to Blue and blackmails him: He'll out Simon unless Simon sets him up with Abby. This thread of the story is tiresome, a contrived conflict that lacks authenticity (though it's on par with the nonsense typical of a teen rom-com), but it spotlights the film's curious position.

Set among non-religious people in a non-backwards part of America in 2018, the movie can't realistically present Simon's sexuality as a problem. When he does come out, whether on his own terms or Martin's, none of his friends or family are going to reject him, and any opposition he faces will be the minority opinion (and a socially unpopular one at that). His reluctance — and he seems to know this, at least subconsciously — is self-inflicted, caused by uncertainty over whether he accepts himself as gay.

The blackmail subplot provides conflict for a story that otherwise wouldn't have any, and for which not having any is kind of the point. Because this isn't a movie about a gay teen who bravely comes out of the closet in the face of adversity, which it would have been if it were made even 10 years ago. This is a movie about a teen who overcomes his own hangups to come out into a world that accepts him — which is the only way to make this movie in 2018. Our progress as a society has rendered a once-reliable fictional device ineffective. Being gay is no longer an automatic source of conflict.

Love, Simon is important because it conveys this new reality in a way that's loving and affirmative, not to mention funny and sweet, with an unabashedly cornball finale to tug at the heart of romantics across the sexuality spectrum. (I suspect the teenage girls who would swoon over Simon in a traditional rom-com will be just as delighted to see him find happiness on the "other team.") The message isn't "be tolerant of gay people." It's "we're tolerant of gay people now, so let's enjoy some fun, kind, uplifting stories about them the way we would anybody else."♦

The original print version of this article was headlined "In & Out"

Love, Simon is not showing in any theaters in the area.