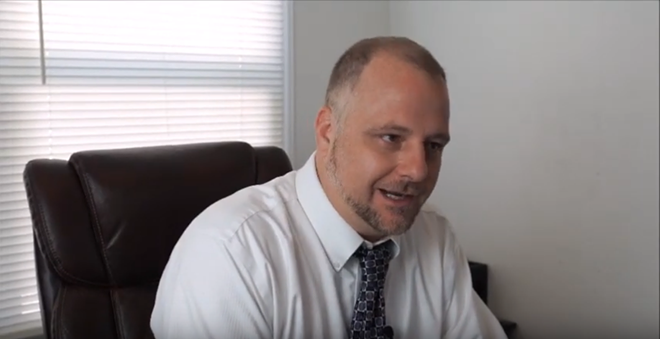 And Wiegand is not sorry for the Facebook post calling Spokane City Council presidential candidate Cindy Wendle a "hollow-eyed reptile."

Yes, he edited the "hollow-eyed reptile" line to "corporate stooge" in his Facebook post, but he says that's only because the PAC's "social media director’s girlfriend didn't like it."

He wants to be absolutely clear that he's not retracting or apologizing for the insult. The name-calling, he says, is an intentional media strategy, a reflection of the tactics he believes have been effective on the right.

"I’m not a devil here. I’m just using different media tactics," Wiegand says. "I think ones that should be used a little bit more often, especially harder edge ones."

Wiegand, a former talk radio producer currently living Ephrata, Washington, started Question PAC last year, when he trained most of his fire on Eastern Washington U.S. House members Cathy McMorris Rodgers and Dan Newhouse. This year, he's spent little over $1,800, mostly on Twitter and Facebook ads. That's chump change compared to PACs funded by the firefighter union and the Realtors — but Wiegand's use of insulting phrases like "hollow-eyed reptile" has brought his group attention and bipartisan criticism.

"I am not a Cindy fan but name-calling like this is not OK," wrote liberal-leaning Rick Eichstaedt, former director of the Spokane nonprofit Center for Justice.

"Shades of Hillary and her 'Deplorables' comment," former Spokane GOP Chair Stephanie Cates wrote. "Gotta love when they show their hand and say what they really think of us. Hollow-eyed reptiles, unite!"

Both Wendle and Woodward's opponents have condemned Wiegand's rhetoric.

"Emotions are running high in these final days of the campaign," Beggs wrote, noting his civil relationship with Wendle. "Unfortunately, some people cross the line and make personal attacks. I saw one levied against my opponent on Facebook by someone I don't know who isn't part of our campaign. It was unfair and is not welcome... I wish Cindy and her family the best during these final days."

"I don’t ever think name-calling is a good thing," Stuckart says.

In 2010, the left-wing media criticism site Media Matters pointed out the irony of right-wing stunt-journalist James O'Keefe for "calling a professional journalist a 'bubbleheaded bleach blonde' while accusing CNN of sexism."

Asked if the use of the word "bubbleheaded" for a former female journalist was sexist, both Beggs and Stuckart said that it could be.


"It certainly seems to border on sexist," Beggs says. "I haven't heard men referred to as 'bubbleheaded.'"

"It's political pornography," Wiegand says. "It doesn’t reach for the brain, it reaches for the balls."

Wiegand dismisses accusations of sexism. He says "bubbleheaded" is a word he says he'd apply to a male just as readily if he were an idiot. It's not sexist, he says, it's just mean.

This, on the other hand, is politics — where Wiegand believes the stakes are too important to fret about civility.

"When you’re getting your throat cut out here, we don’t want to hear people talk about 'tone,'" Wiegand says. "If the people I worked with in right-wing talk radio knew that a bunch of libs were sitting around talking about 'tone,' they would laugh into their sleeves. The right is already stabbing us in our gut with their lies and slander. You can talk about all the 'tone' you want, but I’ve got a knife to my f—-ing throat."

It's an argument you hear pretty often from people on both the left and the right: The other guys are so bad that if we refuse to adopt their controversial tactics, we're going to be decimated.

But Wiegand argues he has a unique, first-hand perspective to the sort of media strategy the other guys use. For 12 years, he says, he worked for the Talk Radio Network, an Oregon-based right-wing radio outfit. He says he worked as a producer for talk radio hosts like Laura Ingraham and Michael Savage.

He wasn't a right-winger himself back then — he says he was more of a disinterested centrist. But if you wanted to work in talk radio, you didn't have much of a choice which side of the political spectrum you worked for.

Wiegand describes the sort of rhetorical tactics used by right-wing talk radio with a mash-up of revulsion and admiration.

"It's political pornography," Wiegand says. "It doesn’t reach for the brain, it reaches for the balls."

He even says he likes Michael Savage, the guy who lost his MSNBC show after labeling a caller a "sodomite" and telling him he should "get AIDS and die." That's a comment that even Wiegand thinks crosses the line.

But Wiegand says he wanted to apply some of strategies used by right-wing operatives to fight conservative candidates in Eastern Washington. Like ridicule and repetition.

When I mention a clip I remembered frequently hearing on Sean Hannity's talk radio show during the Bush years — former Vice President Al Gore screaming about how George W. Bush betrayed this country — Wiegand immediately launches into a pitch-perfect impression of the clip "He BETRAYED this country! He played on our fears!"

After all, Wiegand himself has played that clip countless times on the talk radio shows he worked on. He says he had an actual button on talk radio labeled "GORE — PLAYED ON OUR FEARS" that he could press to blast out the audio clip whenever the show wanted.

Wiegand argues the same sort of strategy should be used to spread the clip of a debate audience scoffing at Nadine Woodward for screwing up homelessness statistics.

"You have to fight back," Wiegand says. "We will never tell a lie, but we will be mean. "

Recently, Wiegand has repeatedly attacked Wendle as "part of the Washington Policy Center, a member of a nefarious pro-corporate group that seeks to turn public funds into private profit."

Back in 2016, Wendle was one of 50 members who were part of the Eastern Washington Advisory board of the Washington Policy Center.

"Really, it’s just free-market ideas — that’s what’s I support," Wendle says. Wendle herself isn't on the board today, though her husband, Chud Wendle, still is.

But to Wiegand, Wendle's connection to the Washington Policy Center makes her worthy of the "hollow-eyed" label.

"They’re a menace to our community," Wiegand says about the Washington Policy Center. "Anything we can do to push back against that menace — they're dangerous."

Asked about the attacks against her, Wendle says it just makes her sad.

"It distracts people from talking about issues. That’s the most important thing for the election," Wendle says. "This type of stuff distracts everyone from the important stuff."

Yet, Wendle herself has been criticized for her own advertisements.

One TV ad mischaracterized crime stats and falsely implied that footage of a Baltimore homeless camp was part of an unrecognizable Spokane. Another mailer took a family photo of Beggs and photoshopped onto some other dude in a way that made him look chubbier and gave him a double chin.

"Voters deserve better than attempted body shaming images and distorted facts," Beggs wrote in a press release sent out today. "Our campaign will continue to present a fair picture of the facts and support candidates and their families who risk seeking public office." 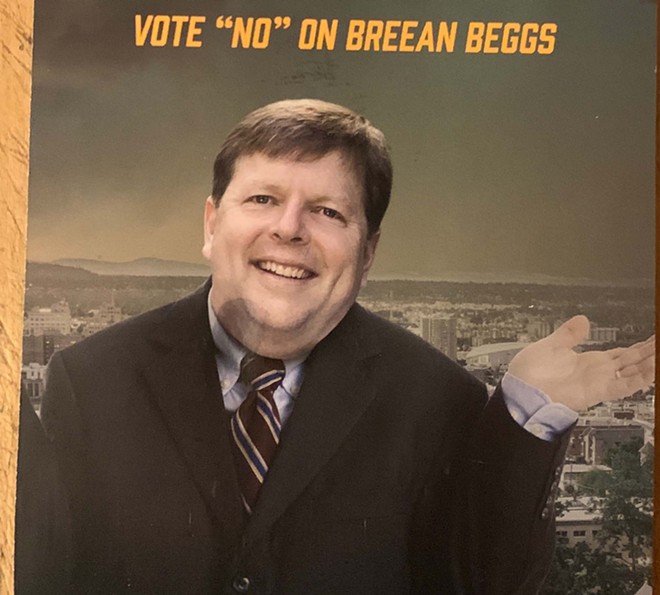 Mailer paid for by the Committee to elect Cindy Wendle
Lately, you don't even recognize Breean Beggs? That's because that's not his body.