A Fusion of Flavors

Celebrating fall with a unique blend of Northwest and Japanese cuisines 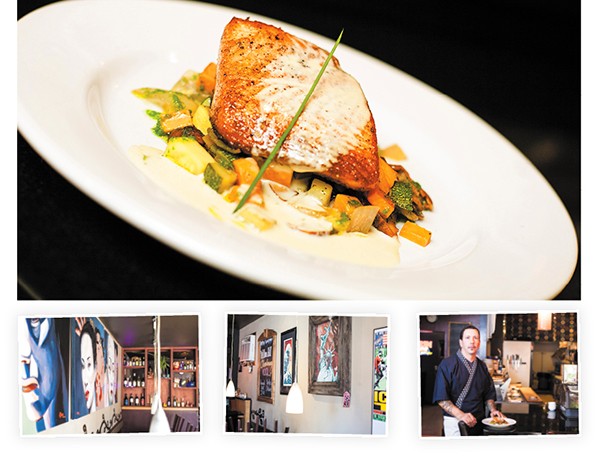 (substitute other types if you prefer or eliminate)

1. In a heavy sauté pan, melt oil and butter over medium heat. Add onions, cook until translucent. Add yams and mushrooms. Stir and cook until all water has evaporated and mushrooms wilt a bit. Add yellow squash and zucchini, making sure to keep all the ingredients moving in the pan. Reduce heat to low, cook until vegetables are soft but not mushy. 2. Taste and adjust seasoning accordingly.

Blend all ingredients together. Add pepper as needed, mayonnaise if too salty (miso is salty) and vinegar if it's too thick to coat back of spoon.

4 six-ounce portions salmon, skin on (or other firm fish)

Salt and pepper to taste

1. Preheat oven to 400 degrees. Season each side of fish with salt and pepper. In a heavy, ovenproof sauté pan on medium-high heat, add butter, stir and cook until it turns brown. Add salmon. Cook a few minutes until you can see caramelizing on one side of the fish — lift gently with spatula to check. 2. Turn salmon over gently in the pan, place whole pan in preheated oven. Cook an additional 4-5 minutes until fish is medium-done (1-2 minutes longer if you like it firmer). Check for doneness by placing a knife tip in the fish and slightly lifting the flesh. 3. Remove from pan and place on paper towel to absorb excess fat.

"I draw it from other chefs," says Basso, whose post-culinary-school experiences in Seattle ranged from classic French cooking under Rover's chef/owner Thierry Rautureau to celebrating Northwest cuisine at the former Cascadia. Also in Seattle, Basso learned Japanese cooking at Mashiko and was head chef at the now-shuttered Saito's. When the Bassos returned home to Coeur d'Alene in 2002, Viljo worked alongside Ryuhei Tanaka of the now-closed Takara.

Armed with a passion for seafood, his very sharp chef knives and an idea for a sushi restaurant that he originally conceived while at culinary school in Oregon, Basso opened Syringa in 2006 with his wife Autumn.

Dishes at Syringa are predominantly Japanese. The restaurant is highly regarded for its very fresh fish, generous portions and fare that goes above and beyond typical offerings of sushi, sashimi, tempura and yakisoba noodles. The Hamachi Kama, for example, is a humble "collar" of bone-in yellowtail tuna, expertly cooked with a light crust and delicate, lemony Ponzu sauce.

Basso's advice for selecting fish? If you're buying a whole fish, he says, look for clear eyes, nice red gills, shiny skin. Don't be put off by the slippery texture; that means the fish is fresh. Filets, says Basso, should be brightly colored, moist and slightly firm; avoid anything cracked or soft.

That's the kind of advice that aspiring cooks appreciate, no matter their age. Basso enjoys partnering with other regional chefs to share their knowledge. In addition to teaching sushi-making for adults at Coeur d'Alene's Pilgrim's Market, last summer he teamed up with chef Adam Hegsted of the Coeur d'Alene Resort & Casino, chef Ryan Stoy of The Cellar and fellow sushi chef Troy Chandler from Bonsai Bistro to teach a cooking class for kids as part of Art on the Edge, a local program assisting youngsters who are in transitional housing.

And last year, he joined Hegsted's team invited to cook for the prestigious James Beard Foundation.

His willingness to experiment keeps Syringa's menu fresh, with occasional unexpected glimpses of his past restaurant experiences — in dishes like potato croquettes or Alaskan scallops with Swiss chard and vanilla teriyaki sauce.

"I also draw inspiration from the seasons," adds Basso, who recently returned from a seafood trade show in Seattle to bring us this issue's recipe: wild salmon accompanied by a colorful hash of Chanterelle mushroom, yam and squash, topped with Basso's spin on traditional Japanese miso (fermented soybean).

Salmon showcases the northwest at its best, says Basso. "And it's the perfect complement to wild mushrooms."

He adds, "We are blessed to live in an area that provides us with a myriad of forageable products right out our own front doors." ♦