One farmer's crusade for sun-grown weed, and the need for more data on indoor grow operations 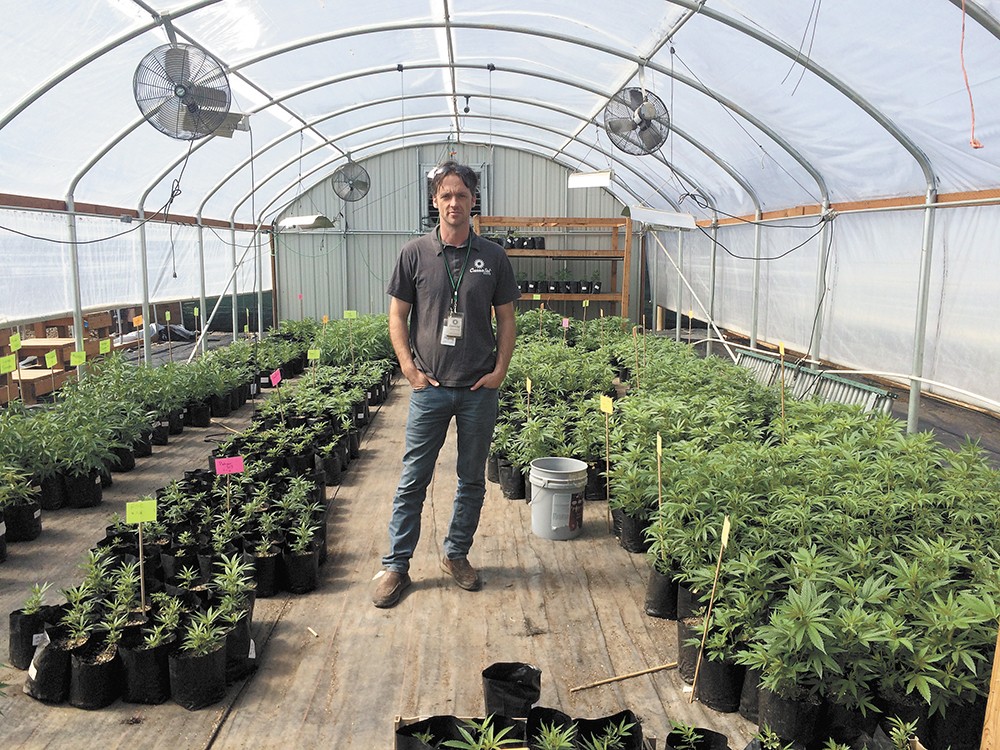 Mitch Ryals
Jeremy Moberg runs one of the largest outdoor pot grows in the state.

Jeremy Moberg has an idea of what it's like to replicate the sun's energy.

He used to grow weed in a closet in Browne's Addition, and then a basement on the lower South Hill under lights fueled by diesel-powered generators.

Each crop of about 20 pounds used about 1,000 gallons of diesel fuel, Moberg says. That's 50 gallons per pound.

"Eventually I was like, the carbon footprint for this is enormous," Moberg says. "It wasn't worth it."

That was back in the early 2000s, when growing pot could result in serious prison time. The teenage Moberg continued his indoor operation, but decided to test his green thumb outdoors. He traveled back and forth to Okanogan County with a buddy to tend to about 20 weed plants deep in the foothills of the Cascade Mountains. They would sling bags back in Spokane, and at least one thing was clear: People preferred the indoor-grown bud. It was greener, frostier and smellier.

Moberg, 41, now runs CannaSol Farms, one of the state's largest outdoor marijuana producers in terms of sales, and continues to be a vocal advocate for sun-grown weed in a state where there are more than twice the number of indoor growers as outdoor growers. He hopes to change that.

It's difficult to understand the full effect that indoor weed cultivation has on the environment, in part because at least some of it happens illegally, and in part because there isn't enough research.

The Washington State Department of Ecology is relatively silent on the issue of recreational weed's environmental impact, except for a single page of its website that provides general guidelines for water use, air quality and waste management.

"We're pretty hands-off in our involvement," says Brook Beeler, an Ecology spokeswoman. "It's more up to local jurisdictions to manage those decisions. But there are environmental considerations, of course."

"The most important environmental cost of marijuana production in the legal Washington market is likely to be energy for indoor, and to a lesser extent, greenhouse growing," the analysts wrote. They estimate that if all of Washington's weed was grown indoors, the state's energy consumption would jump 0.8 percent. One indoor grower in Seattle says his monthly energy bill is about $17,000.

Analysts also point to oft-cited, peer-reviewed research from Evan Mills, a scientist and principal at the environmental consulting firm Energy Associates. According to Mills' 2012 research, producing just over 2 pounds of weed indoors has the same carbon footprint as driving across the country 11 times in a car that gets 44 miles per gallon. And growing enough weed for one joint is the equivalent of leaving a 100-watt light bulb on for 25 hours.

"This is clearly a huge unattended problem," Mills says by email. "More research is certainly needed to refine our understanding, as with virtually every energy and environmental problem society is facing today, but that is not a reason to delay action."

Although it's impossible to know exactly how much power indoor marijuana cultivation uses, the Northwest Power and Conservation Council estimated the potential long-term environmental impact. Using information from growers in Washington and Colorado, researchers concluded that the region's electricity use could triple to as much as 300 average megawatts — the equivalent of energy use for 220,000 homes — by 2035.

Beyond energy use, outdoor grows can contaminate surrounding areas. Lt. Patrick Foy of the California Department of Fish and Wildlife told the International Business Times that it's not uncommon for remote marijuana farmers to destroy creeks and other sources of water with harmful pesticides and fertilizer.

So if indoor growing sucks up so much energy, why do people continue to do it? There are a few reasons.

Second, Moberg says, some people still hold tight to the belief that pot grown indoors is superior. While that may have been true of the weed he grew illegally up in the hills — "guerilla growing," he calls it — that's not necessarily true of the stuff he produces now.

He plants his outdoor crops in rows beneath metal-framed "hoophouses," with giant tarps flung over the top that allow him to control the amount of time his crop is exposed to sunlight. As an indoor farmer would simply turn his lights off, Moberg pulls tarps over the top of the metal frames to "turn off" the sun.

Eric Skaar is a general manager at Spokane's Sativa Sisters, one of the local shops that stocks Moberg's bud. Skaar says some of his customers prefer weed grown indoors because of its "bag appeal" — it looks better. Others come in specifically looking for outdoor-grown.

"I personally prefer indoor, but I've smoked outdoor [weed] where you can't even tell the difference," Skaar says.

John Morris, an energy consultant in Portland, says the next step is to get a more accurate idea of how much energy indoor operations require, and how to build them using the most efficient equipment.