A Hike Becomes a Death March

A Walk in the Woods lacks a cinematic smart-ass 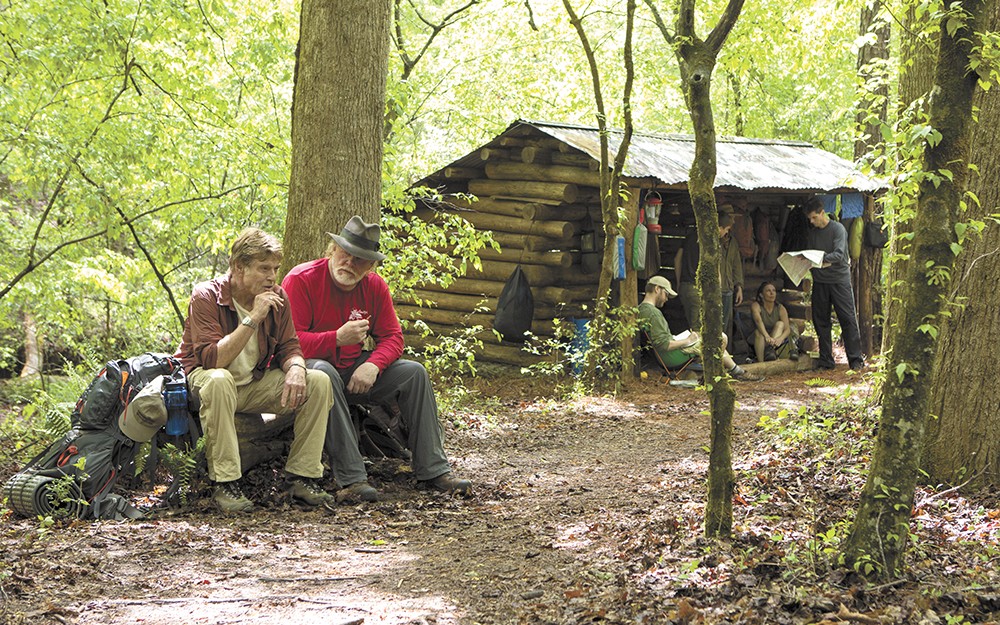 Robert Redford and Nick Nolte cop a squat in the woods.

from the glory days of cinematic smart-asses.

Hollywood once enjoyed a long tradition of wise-ass protagonists whose inability to let a dry witticism fly by unmolested often landed them in trouble, from Paul Newman in Butch Cassidy and the Sundance Kid to Paul Newman in The Sting to... let's see... Paul Newman in The Verdict to, uh, Paul Newman in Nobody's Fool. OK, maybe there was only one consistently great cinematic smart-ass. On his best days, George Clooney can pull off a Newman-esque slyness, but his delivery varies from film to film, and besides him, the movies are filled with earnest lunkheads like Vin Diesel or sly action stars like Chris Evans who never really get a chance to test-drive sardonic humor.

All this is relevant because it's pretty much impossible to write about A Walk in the Woods without noting that Robert Redford originally bought the rights to Bill Bryson's memoir with a mind toward producing it as a film that re-teamed Newman and Redford one last time. Redford would play Bryson, an aging travel writer setting out to hike the Appalachian Trail, and Newman would play Stephen Katz, a down-on-his-luck old friend of Bryson's who volunteers to hike the trail with him. (In the book, the men are closer to middle-aged than just plain aged, but to dwell on the many sacrifices of adaptation is to go slowly mad, so we'll just let them lie.) Once you know the backstory, you can't really watch Walk without imagining the alternate universe where Newman lived long enough to make the film.

Not that Nick Nolte, who eventually landed the part of Katz, is by any means bad. In fact, Nolte is the best part of Walk; his gargling-with-razor-blades voice and ground-beef face add a believability that a looker like Newman might not have been able to pull off, and Nolte brings a subtle physical comedy to the role — bumping into a door here, pulling off a funny little Chaplin walk there — that makes Katz immensely likable, even as he admits to felonies and adulteries and plenty of other broken laws, commandments, or both.

Walk doesn't know what to do with a good smart-ass line when the script delivers one: before they begin their trip, Bryson asks Katz, "How are you with bears?" And Katz replies, "They haven't gotten me yet." You can imagine Newman's delivery rolling around on his tongue like a dry Champagne, but Nolte plays it for broad laughs, and the editing steps awkwardly on his delivery.

The problem with Walk is a total lack of chemistry. Redford and Nolte never demonstrate the familiarity that their roles demand; they feel like acquaintances rather than friends who once backpacked Europe together and then had a falling-out that lasted some four decades. And director Ken Kwapis can't perform the basic alchemy required to bring a film to life. Long stretches of Walk look as cheap as a TV movie, and the conversations often fall flaccid. Every conflict in the film is sidestepped or ignored, either through bad editing or lazy screenwriting.

A Walk in the Woods is not showing in any theaters in the area.