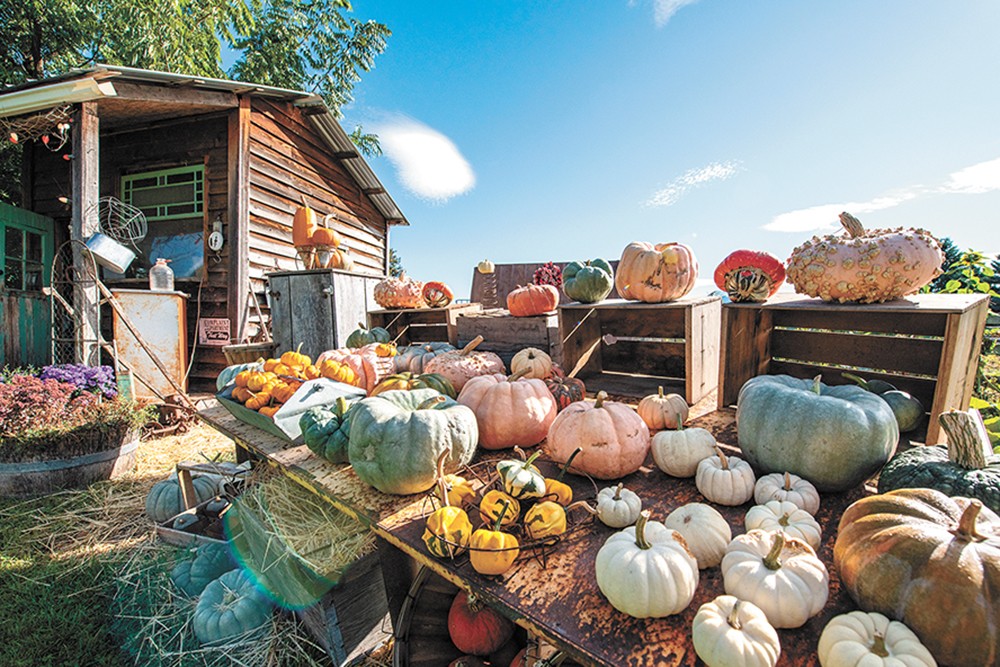 Erick Doxey photo
The farm opens to the public twice a week through October.

Linda Swenson is the queen of pumpkins, pie and, naturally, pumpkin pie.

From her historic farmstead tucked in the middle of a suburban development stretching across the Rathdrum Prairie north of Coeur d'Alene, Swenson tends to patches of heirloom and specialty pumpkins and squash, and shares her secrets to baking some of the best pies in the region.

By late September, Prairie Home Farm's pumpkin patches are bursting with the ubiquitous fall squash in all varieties, from the smooth-skinned carving kind to less common warty and knob-covered versions, alongside the rare heirloom Cinderella variety, the Rouge Vif D'Etampes, one of Swenson's favorites.

"I love showing off my pumpkins," Swenson gushes. "I can get really weird about my pumpkins. The Marina di Chioggia — isn't that gorgeous?" she continues, pointing at the warty green pumpkin. "My friend stopped by earlier and said 'That pumpkin is kind of ugly,' and I said 'Stop! Take that back!'"

Swenson has been growing pumpkins at the farm since 2004. She tends two patches, one for carving pumpkins sold to visitors at 39 cents per pound, and another for the heirlooms, most of which are used for cooking and making pies.

After retiring from her former career as a nurse, Swenson transitioned to running the farm and teaching pie-making classes full-time. She also sells her handmade seasonal pies as Lil' Punkin Pie Co. at the Kootenai County Farmers Market, and accepts custom orders for weddings, events and other occasions.

To help illustrate the huge variance between the pumpkins on the farm — though she says most are actually considered winter squash — Swenson grabs her well-loved copy of the coffee table book The Compleat Squash: A Passionate Grower's Guide to Pumpkins, Squashes and Gourds.

Flipping through water-wrinkled, full-color pages of the tome's entries for dozens of varieties from around the world, Swenson explains what makes these heirloom varieties special, stopping occasionally to exclaim over a particular favorite.

"That one is a Musquee de Provence, and as time goes by it goes completely khaki and it's perfect for pie," she says. "I had one in the bakery until this spring, and I started taking pumpkin pie to market in the spring because pumpkin pie lovers want their pumpkin pie."

Heirloom pumpkins, Swenson explains, haven't been crossbred or otherwise intentionally modified for shape, size, color or flavor. Most have been cultivated for centuries, with farmers saving seeds from each harvest to plant again the next year.

"I call them heirloom or specialty. Some aren't heirloom but are specialty, and are different colors or with different ribs and how deep the ribs are on them, like that white Flatso," she says. "Heirlooms are just heritage seeds. They're harder to find because there are so many variations."

Because she's growing so many varieties in the same plot, however, Swenson can't save seeds to replant the following spring because the plants have been cross pollinated and thus would carry any hybridization into the next harvest. Instead, she orders seeds new each season.

In addition to pumpkins, Swenson grows several types of corn and fruit trees, with most of the fruit going into her fresh seasonal pies.

Visitors to the farm, which is open to the public twice weekly each October, can purchase pumpkins for carving or cooking, and meet and feed its many animal residents: geese, pigs, chickens, goats, rabbits, horses, ducks and more. Guests also enjoy taking photos around the rustic homestead, on vintage tractors, trucks and around Swenson's artful pumpkin and produce stand. The farm also hosts a few special and private events each season, as well as school field trips.

"My thing is, it's just so simple," she notes. "I have farm animals and people want to feed my animals and that is literally it, and families spend two hours here. I love when people come here and they see the old barn and stuff growing in the ground. I find people change when they come to something like this. They're sweeter and they take the time and it's just a beautiful day with their family."

Pairing her love of cultivating specialty pumpkins with homemade pie was a natural fit for Swenson, who launched Lil' Punkin Pie Co. in 2015. Her personal affinity for baking runs deep: Swenson's grandfather owned a bakery in Wenatchee, and she developed her own appreciation for baking as a teen.

Twice a week at the Kootenai County Farmers Market (Wednesday and Saturday), Lil' Punkin Pie Co. usually sells out in two hours or less. Customers also frequently call, text and email Swenson to place orders, which she leaves for them to pick up in a vintage red Westinghouse refrigerator on the farmhouse's front porch.

Throughout the year, Swenson processes fruit from the farm to bake into her pies: cherries, peaches, yellow plums, blackberries, rhubarb, pears, mulberries and more. Other produce she doesn't have — or when she runs out — comes from local or regional growers.

Those looking to try and replicate Swenson's beloved pies at home can sign up for her Farm Pie School class ($35), which focuses on the secret to any successful pie: crust. Swenson swears by Betty Crocker's "tender and flaky" pie crust, which uses just shortening, flour, water and salt. Open registration (private sessions can also be arranged) Farm Pie School is held on the fourth Tuesday of the month at 5:30 pm in Swenson's home kitchen, and there's usually a waiting list. Students wear vintage aprons and use old rolling pins.

"Pie is so emotional," she says. "My classes and my people who love pie just love pie. It's a very heartfelt thing." ♦