A Load of Scrat

Ice Age: Collision Course continues a franchise that keeps going only because it can 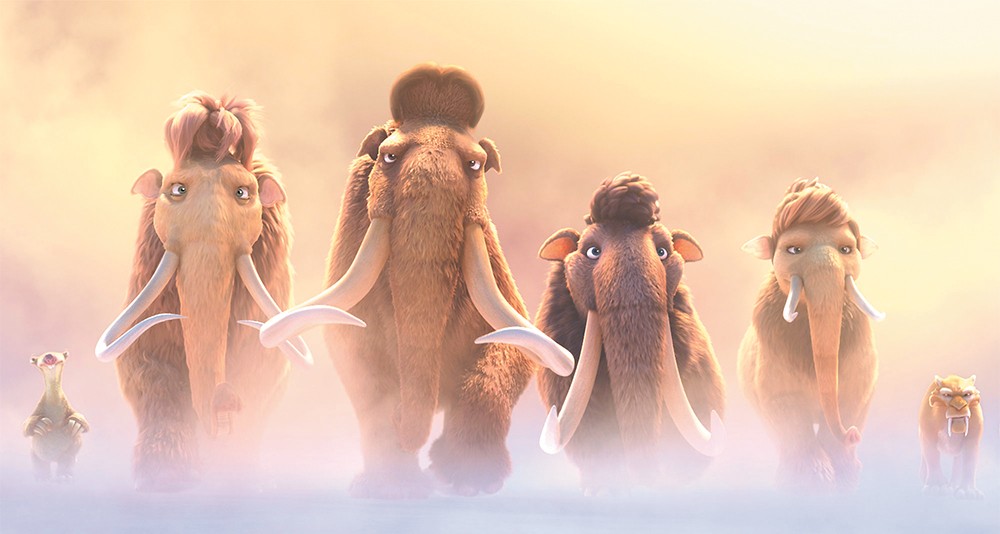 Even the mastadons are getting tired of the Ice Age franchise.

A curious realization came over me as I waited to watch Ice Age: Collision Course:

I had no idea how many of these movies there had been. On the one hand, I was pretty sure that this was the fourth, though in fact it's the fifth; on the other hand, I wouldn't have been surprised if you had told me it was the 37th. Every three to four years, another one pops up, despite the fact that, beyond the first one's Three Godfathers premise and the random misadventures of the acorn-obsessed Scrat, I could remember absolutely nothing about any of them.

But in a sense, that makes Ice Age the ideal franchise property for the 21st century: You want something familiar enough that it's easy to market, but you'd also prefer not to irritate those who cling to the memory of beloved previous chapters. This is a series built on one amusing peripheral character and a vague sense of goodwill, continuing because there's no reason not to.

And perhaps that's why, even though there have been far worse films in 2016, this one ate at my gut. Collision Course isn't a case of wringing the last drop out of a once-great concept. It's just a date on the release schedule. It's a safe bet.

It also feels like it was run through the contemporary screenwriting program for building a blockbuster. Because while this may be just an animated family film, the stakes are nothing less than — say it with me now — The End of the World. A huge meteor is on its way towards Earth, thanks to the hapless Scrat somehow finding a buried spaceship and... never mind. Armageddon looms, and while you'd think that a bunch of prehistoric animals like Manny the mammoth (Ray Romano), Sid the sloth (John Leguizamo) and Diego the saber-toothed tiger (Denis Leary) wouldn't have much of a shot at averting the catastrophe, by golly, they're going to try.

They've got a lot of help, as it happens, because this fifth Ice Age installment also takes a page from Fast Five by bringing back characters from all of the previous installments. There's Manny's wife Ellie (Queen Latifah) and possum brothers Crash (Seann William Scott) and Eddie (Josh Peck) from The Meltdown! Buck (Simon Pegg) the one-eyed weasel from Dawn of the Dinosaurs! Diego's mate Shira (Jennifer Lopez) and Sid's granny (Wanda Sykes) from Continental Drift! New ones are in the mix as well, including the fiancé (Adam Devine) of Manny and Ellie's daughter Peaches (Keke Palmer), a romantic interest (Jessie J) for Sid, and a yoga-guru llama. Like the X-Men movies, it's a series that has built up an absurdly unwieldy cast of characters, and shows no willingness to curb the bloat.

That's because, on the most fundamental level, franchise place-holders like this don't even have to tell a story. Oh sure, there will be a token emotional conflict or two — the main one here being Manny's Father of the Bride-esque reluctance to let go of his little girl — but the primary goal is to just have stuff keep happening for the 90 or so minutes required to complete a feature film running time. The stuff can be frantic and goofy, or occasionally it can seem sad for the 15 seconds when everyone thinks one of the other characters has died, and maybe there should also be an anachronistic joke where one of the characters says "hashtag" and you just die a little bit inside. And then a musical number at the end. God forbid there's not a musical number at the end.

And yes, there is Scrat, our rodent Coyote pursuing his Road Runner of an acorn into circumstances of constant torment. His segments are still the best thing about these movies, allowing for a zany visual creativity that the rest of the movie doesn't bother with, as when Scrat struggles futilely against the effects of increased gravitational pull. But those scenes also remind you that there is literally no artistic reason for these movies to keep existing if they're just a delivery system for a character that belongs in a seven-minute short. When it comes to a certain breed of soulless turnkey brand-extenders, an extinction-level event starts to seem attractive. ♦

Ice Age: Collision Course is not showing in any theaters in the area.