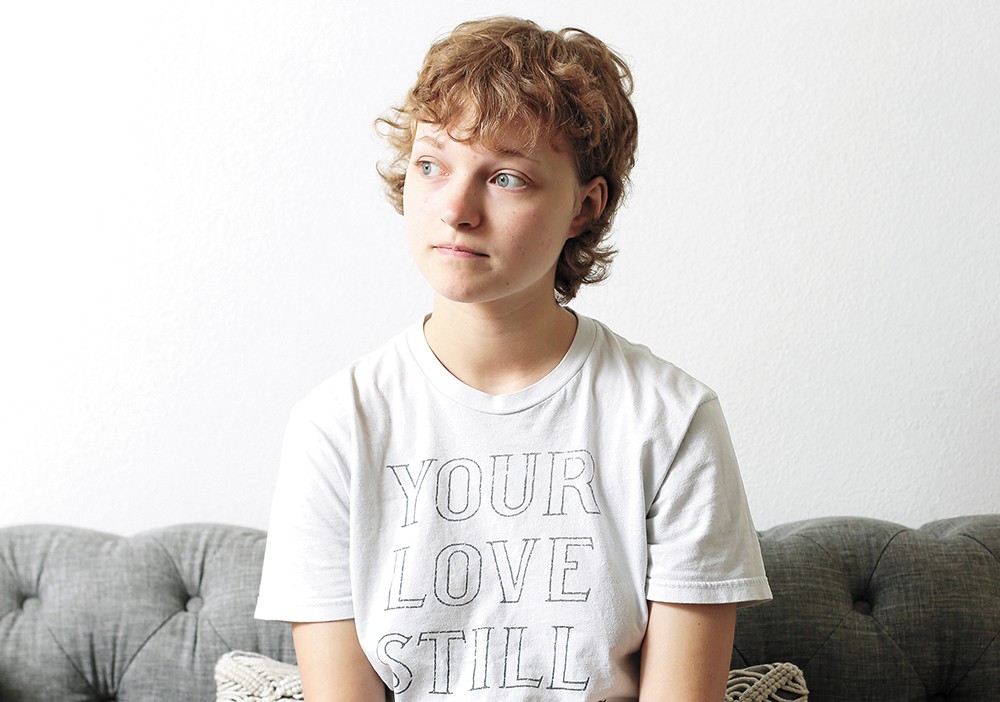 Abby Baker stepped into the backseat of her mom's Honda Civic and felt safer than she had in a long time. She was away from the other girls who threatened to beat her up. Away from the cafeteria that felt just like those prison shows on TV. Away from the staff members who'd inject the girls with chemicals to subdue them.

Abby, 15, had never been more grateful to see her mom that day, March 2. She'd only been staying at Acadia Montana, a youth treatment center in Butte, for two weeks. But it felt longer. She was allowed virtually no contact with her family, her friends or the outside world while she was there and she was desperate to see a familiar face.

But as soon as she closed the car door, Abby was gripped by a terrifying thought: She'd soon have to go back into the treatment center.

She burst into tears.

"I felt like it wasn't fair that I had to go back," Abby tells the Inlander. "I just wanted to leave so badly."

Megan Riggs, seeing her daughter Abby crying, promptly decided Abby would never go back to Acadia Montana and brought her home to Spokane. Since she left, Acadia Montana has become part of a string of treatment facilities across the country that have been exposed for mistreatment of vulnerable youth. Shortly after Abby left, new reports claimed that a 9-year-old girl from Oregon had been drugged at Acadia Montana in an effort to calm her down. Further reports in a series of stories from the Montana Standard revealed this was a common practice and that the facility faced a litany of other allegations of mistreatment over the years. In June, the 108-bed facility, owned by Acadia Healthcare, announced it was closing. (Acadia Healthcare did not respond to Inlander requests for comment.)

Abby stayed at Acadia for a relatively short time and didn't experience the worst of the allegations Acadia has faced. But it was still traumatic, she says. She chose to speak to the Inlander in hopes of raising awareness of what can happen when a child needing mental health treatment has nowhere else to go.

"Oftentimes, facilities like that are your only option," Abby says. "And I think it's important to say something because there needs to be better options for kids who have mental health problems."

The last time the Inlander spoke to Abby was in spring 2018. Then, Abby was a student at Sacajawea Middle School preparing a speech for a walkout that would call for lawmakers to do something to end school shootings.

By the time the walkout actually happened, however, Abby was in the hospital. It was one of five times over the past two and a half years that she went to the hospital because she felt suicidal. Each time, she stayed there for about a week and was stabilized. She was treated through the Providence RISE program, which provides intensive outpatient treatment. She was diagnosed with bipolar disorder, and the way Abby describes it, her depression "kind of comes in swings." It came back in February of this year, and Abby ended up back at Kootenai Behavioral Health.

There, Abby's case manager and therapist recommended a residential facility where she could get intensive inpatient treatment for a longer period of time. Riggs, her mom, says it was described as a sort of "reset": Abby might have a difficult couple of months but come out better for it. But there were few choices available. Tamarack Center in Spokane was the closest option, but it had a long wait list. That left Acadia as the best available option.

"They really didn't know much about the facility there," Abby says.

"In the two weeks that I was there, I didn't meet with a therapist or psychiatrist once."

Abby was immediately intimidated when she got to Acadia Montana. The fences were really tall. She gave them her mental health history during intake, and staff told her when she got to the girls hall that it would be a "little rowdy." She was pointed to a room where she told a group of other girls her name. She felt a bit disoriented. Suddenly a fight broke out in the hall. And then a girl came up to Abby and told her that someone wanted to beat her up.

"And at that point," Abby says, "I had been there for like five minutes."

She saw things that disturbed her over the course of the two weeks there. She says her roommate had psychotic episodes, and a nurse would come to take her to the "quiet room," which Abby says is basically like solitary confinement. When Abby's roommate returned, "she would be like a vegetable." Abby didn't know what was happening at the time, but after reading reports about Acadia injecting kids with Benadryl and other antihistamines, Abby now suspects her roommate was being drugged. Other times Abby says the staff was negligent. Once, her roommate repeatedly was banging her head against the wall and staff failed to act, leaving it to the other girls to put their hands in between the wall and the girl's head.

For Abby, every day was the same routine. She'd wake up and ask to take a shower, line up for breakfast, stay quiet in line, eat at the cafeteria, go to the facility's school, go to lunch, go back to school, sit in the community room, go to dinner, gather around for a movie, brush her teeth, then go to bed.

Not a part of her day? Actual mental health treatment.

"In the two weeks that I was there, I didn't meet with a therapist or psychiatrist once," Abby says.

Her mom planned a visit two weeks into Abby's stay, but Acadia initially told Riggs that nobody was allowed to visit Abby "because she hasn't met with a therapist or psychiatrist yet," Riggs recalls. Riggs was outraged. "What has she been doing for two weeks?" she asked. Eventually, they allowed her to come visit. Riggs won't forget how Abby was shaking and crying as soon as she got into the car that day on March 2.

"She was just so traumatized," Riggs says. "We called Acadia from the hotel and said she's not coming back."

These kinds of experiences are not rare in the United States. Suicide and depression among teens is rising, including in Washington, and access to treatment can be difficult. Simultaneously, big residential treatment facilities like Acadia are being shut down due to mistreatment of kids.

Sequel Youth and Family Services runs many of these facilities throughout the country, including Clarinda Academy in Iowa. Foster kids from Washington in recent years have been sent to Clarinda when the state of Washington couldn't find a home for them. A report released last year from Disability Rights Washington, a nonprofit advocacy group, revealed dismal conditions and inappropriate restraint practices there, so the state stopped sending kids to Clarinda. Recently, two other Sequel facilities in Utah have been shut down.

Susan Kas, the staff attorney with Disability Rights Washington who has investigated Clarinda, worries that when states send kids to facilities far away, the state's ability to monitor the treatment is diminished. Other states may have different laws when it comes to what kind of treatment is acceptable for kids, for instance. And while not every facility mistreats teens, there are some who argue residential treatment for teens shouldn't be an option at all.

"I think segregating young people from their families and their communities in any institution setting should be something done only if absolutely necessary, and when there's a process to reliably determine that it's necessary," Kas says.

On the other hand, there are those who see the need for more residential treatment facilities in order to provide additional options for teens struggling with substance use and/or mental health. Tim Davis, executive director at Tamarack Center, a 16-bed intensive inpatient program in Spokane, says stories like Abby's — in which she has a bad experience at a facility when everything else is full — are "very common." He argues there's a lack of funding from the state for residential facilities, and that is causing a shortage of beds.

"What I see are fewer options and opportunities for these kids," Davis says. "There's not much out there in the landscape to help them."

Davis says there's a need for more mental health treatment programs across the board, including residential inpatient treatment facilities. But he acknowledges some of those programs have proven problematic.

"It's hard to babysit these places," Davis says.

The consequence, however, can be further traumatizing to vulnerable young people. For Abby, it took awhile for her to recover from her time at Acadia Montana. She enrolled back in the RISE program, and since finishing, she says she's felt "wonderful."

She felt compelled to share her story to prevent other teens from enduring any harm.

"Having mental illness is difficult enough as it is," Abby says. "And being given poor care is detrimental."♦