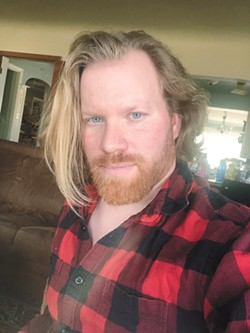 lives on a 100-acre farm near Mount Spokane with his wife, children and parents. While he and his family technically live in seperate house than his parents, the two homes are connected by a shared room.

But now, they live in total isolation from one another despite living on the same property. He's afraid that he may contract COVID-19 during his work as a public defender for Spokane County and subsequently infect his parents.

"My kids say goodnight to their grandparents through the door every night because we can't physically be in the same room with them," Schmidt says. "We chose that as long as I'm still being exposed to the jail and the courtroom, it's just not worth the risk."

Schmidt works for Spokane County's Counsel for Defense, a small indigent defense office that primarily represents defendants accused of serious felonies, like murder and robbery. While county courts have suspended trials and out-of-custody hearings in an effort to keep people from coming to the court house amidst the COVID-19 pandemic, hearings for in-custody defendants held at the jail are still proceeding. And Schmidt and his colleagues are still coming into the office everyday to meet with clients held in the jail and represent them in court.

He and his colleagues "use a lot of hand sanitizer," but that doesn't do away with anxiety about COVID-19. Additionally, their office is physically located in the court house, and people "walk in everyday" looking for legal help.

"It's scary," Schmidt says. "We're still going into the jail and meeting with people and everytime we do it we're worried, 'Are we bringing it in with us? Are we making it worse?' ... But you can't abandon our clients when no one else is going to do anything for them."

Some of Schmidt's clients have had their trials pushed back, meaning that they're slated to spend more time in jail until their cases get resolved. And while the courts have moved to release some inmates due to the potential of an outbreak in the jail, many won't get out.

"Now they're looking at months more potentially in jail during a situation that is highly volatile and dangerous," Schmidt says. "We are right now in the thick of trying to figure out can we get people out, get them out of the way of this impending internal pandemic because once it hits the jail it's going to be a nightmare."