A look ahead at summer music festivals, from Upstream to Bumbershoot 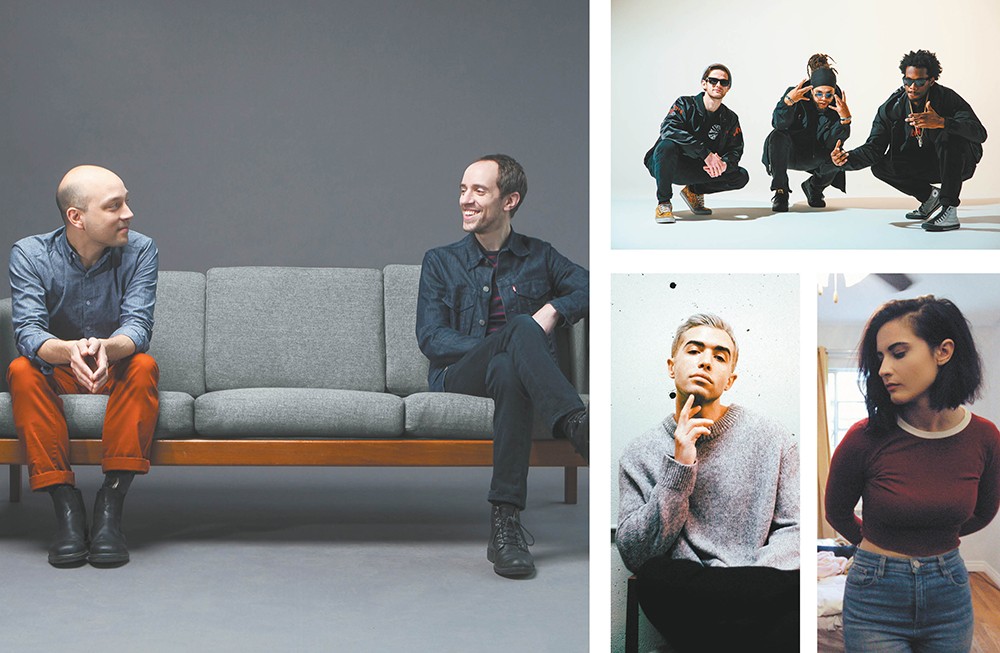 In addition to lots of local musicians, Volume features dozens of touring acts, including (clockwise, from left) the Helio Sequence, Bad Yoshi, Valen and Ryan Caraveo.

Maybe you've heard, but the Inlander's own Volume Music Festival is happening this weekend, with 80 or so acts performing in nine venues throughout downtown Spokane. If you haven't purchased your wristband yet — and we really think you should — they're still available at Volume.Inlander.com. Hop to it! (If you buy in advance, weekend passes are $25; at the festival, you can buy the two-day passes for $35 and single-night tickets for $20. Pick up pre-purchased passes at the Washington Cracker Building at 304 W. Pacific Ave., beginning at 4:30 pm on Friday.)

While Volume is one of the first festivals of the season, hot on the heels of Sasquatch!, it's hardly the last: The festival market is at peak saturation, and there's one for pretty much any predilection.

We've compiled a list of the Northwest festivals on the horizon that we're most looking forward to this summer.

Microsoft co-founder Paul Allen's festival, now in its second year, takes over Seattle's Pioneer Square with live music and symposiums on the music industry. Upstream's two main stages will feature the sultry R&B stylings of Miguel, the classic pop-punk of Jawbreaker and the DayGlo psychedelia of the Flaming Lips. Spokane's own hip-hop artist Jango is also in the mix. upstreammusicfest.com

The Gorge's second summertime festival after Sasquatch! is a must for fans of EDM and electronica. Deadmau5, the producer best known for always wearing that grinning mouse mascot head, is this year's biggest get. We have a feeling that certain substances are popular at Paradiso, so remember to stay hydrated, kids. paradisofestival.com

Cashmere, Wash., is a town of about 3,000 outside Wenatchee, and it's the place to go for this weekend-long gathering of bluegrass, country and roots artists. Outside the main lineup, which includes Flatt Lonesome and Special Consensus, you can attend instrument workshops, slow jams and a Sunday morning gospel show. cashmerecoffeehouse.com

Seattle shuts down the Capitol Hill neighborhood every summer for this lively, mostly-outdoor fest, which leans pretty heavily toward indie rock and pop. Amongst this year's performers: Father John Misty, Bully, Dude York and Ryan Caraveo, who's also performing at Volume this weekend. capitolhillblockparty.com

If jam and roots bands are more your vibe, Summer Meltdown is where it's at. Held in the small town of Darrington, Wash., it's got Bassnectar, Greensky Bluegrass and Big Gigantic set to perform this year. And for anyone who happens to enjoy live music without the aid of substances, Meltdown even offers sober campgrounds. summermeltdownfest.com

Broken Social Scene, Shakey Graves and Built to Spill have been tapped to play 2018's Pickathon, a small festival held in Happy Valley, Oregon, which is about 15 miles outside of Portland. It's family friendly and environmentally conscious, dedicated to being plastic-free and solar powered. pickathon.com

For diehard country fans, it doesn't get much better than Watershed, another Gorge-set festival that specializes solely in honky-tonk. They get some of the genre's biggest names all in one place; Blake Shelton, Brad Paisley, Big and Rich, Clint Black and Brantley Gilbert are all scheduled to perform this year. watershedfest.com

Portland's most hyperliterate rockers, the Decemberists, have a festival of their own at Big Sky Brewing's amphitheater in Missoula. Not only do the Decemberists perform, but they've also enlisted Death Cab for Cutie, Wilco's Jeff Tweedy and Mavis Staples, a member of the iconic R&B ensemble the Staples Singers. travelersrestfest.com