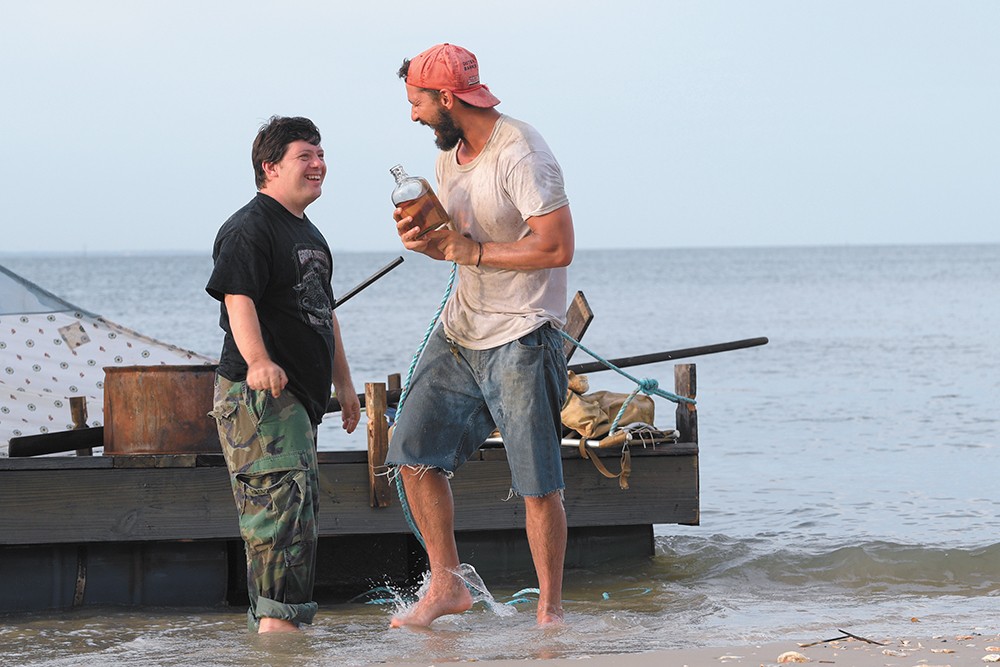 It's hard not to get a touch of a Rain Man vibe from writer-directors Tyler Nilson and Mike Schwartz's picaresque drama The Peanut Butter Falcon, but that sense of familiarity is transcended by strong performances and a sense of place. Zak (Zack Gottsagen), a 20-year-old man with Down syndrome who is a ward of the state in North Carolina, flees his care facility to pursue his dream of being a pro wrestler. While one of his caregivers (Dakota Johnson) searches for him, Zak winds up tagging along with Tyler (Shia LaBeouf), a down-on-his-luck fisherman who has his own reasons for not being found. The tale is mostly episodic, and focuses almost entirely on the hardened Tyler warming up to his role as reluctant guardian, which risks turning Zak entirely into one of those characters who exists exclusively to change someone's heart. But Gottsagen does get a few solid scenes, and LaBeouf is terrific at conveying the way Zak begins to fill a hole in Tyler's life as they move through a landscape dripping with authentic Outer Banks atmosphere. Despite a bumpy climax, the emotion generally feels real, and honestly earned.

As The Peanut Butter Falcon expands to Spokane theaters this weekend, the co-writing/directing team of Nilson and Schwartz opened up about the struggles and payoffs of making a film with a lead actor with a disability.

On the origins of the story

SCHWARTZ: We were volunteering at a camp for people with and without disabilities, an actors' camp. And Zack was making really good acting decisions. He'd been studying acting since he was 3 years old. He went to a mainstream theater arts high school. But he had frustration: "I want to be in a movie. I want to be a movie star."

NILSON: He had trained so long to do it, but how do you get a break? He said, "I've done everything I can; how do I take another step?" We didn't know. There's not a lot of films written for people with disabilities, and he didn't just want to be a "B" character. So he said, "Well, let's just do it together. If you wrote and directed a short film, set in the Outer Banks, I could act in it." And we thought, "Yeah, that seems like the right thing to do."

On making Zak a well-rounded character

SCHWARTZ: We set out to write it for Zack. And we know Zack as a complete human being. He gets upset; he has goals. There's a Spike Lee term, the "magical negro," and you can copy and paste that onto "magical disability person." We looked at how to avoid that.

NILSON: The script opens and closes on Zack. You could make arguments that it's 50/50, or 51/49 Zack, but it wasn't really a challenge to tell it from his perspective. I like his perspective. As a writer, it was more exciting and unique to try to capture that.

On the challenges of getting financing

SCHWARTZ: The first 20 people we talked to ... we couldn't even get meetings to begin with. ... Then people would read the script and like the script, but were like, "OK, so you need somebody like Dustin Hoffman to play this Zak character." And we just said, "We're not doing that. We have the actor and he's really great." And they said, "Either we'll give you the money to do it with someone like Dustin Hoffman, or we won't give you money." We ultimately landed a guy [Christopher Lemole of Armory Films] who had a family member with Down syndrome, so he connected with the story. Also, just to be blunt, enough money to make a bad business decision.

On hopes for the movie now that it's out in theaters

NILSON: I think this film is rare. Movies are changing; the way people digest movies is changing. If this film doesn't do well, if the business doesn't show that people are willing to accept someone like Zack as the hero, then films like this just won't get made, ever again, realistically. I'm really praying that people can see Zack as a hero, and that they go see it in theaters. This one's got heart, it's got some bite, and I think it's worth seeing in theaters. ♦