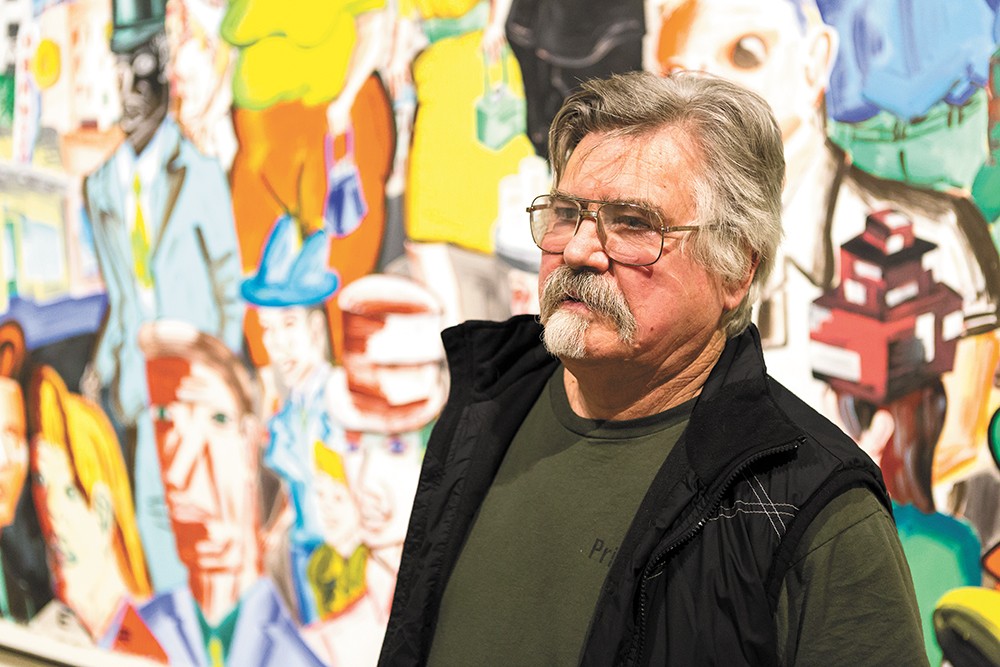 Stephen Schlange
Patrick Siler in front of his exhibit at the MAC.

The heaviest piece, a massive ceramic pipe, weighs in at three-quarters of a ton and stands 8 feet tall. Across the room, the largest artifact by surface area measures 7 by 14 feet. Titled Pillars of Enterprise, it's installed on a wall left of the entrance to Gallery "C" in the Museum of Arts and Culture.

The remainder of artwork on display as part of "Meet Me at the Spot: The Art of Patrick Siler" varies widely in media and form, from woodblocks and prints to ceramics and paintings, and drawings to carved wood. Pieces range in size from a dinner plate to the two massive ceramic works.

Spanning Siler's half-century career, the ongoing exhibition is a meditation on everyday, average people, by an artist who's spent those 50 years studying both his craft and life's raw, truthful imagery. Siler has incorporated these human experiences into an oeuvre described as bold, raw social realism that's presented in humorous, serious and sympathetic modes, some more abstractly than others.

Explaining his purpose behind a large colorful painting of 32 figures in an urban setting, Siler says, "I thought of this as kind of a giant exercise in trying to put all these people together and make it interesting, and get some varied humanity together."

Though a nearly lifelong resident of Eastern Washington, "Meet Me at the Spot" is Siler's first one-man exhibition at the MAC. The show is also running as story No. 66 in the museum's long-term "100 Stories" regional history exhibit. Siler, a resident of Pullman and Professor Emeritus at Washington State University — he taught in the fine art department for 33 years before retiring in 2005 — most recently was showcased at the MAC back in 1989, as part of a group show titled "Inland Northwest Masters." Many of the artists in that show have since had solo shows at the museum, but Siler hadn't, and this was a main factor in choosing to feature him now, says Valerie Wahl, the museum's curator of collections.

"He's from Washington and has been here his entire teaching career, producing work and influencing others," she says. "What we have here is a large mix of media types: ceramic works, woodblock prints, carvings, drawings, painting — even a couple furniture pieces. The goal of this exhibition was to show that breadth." 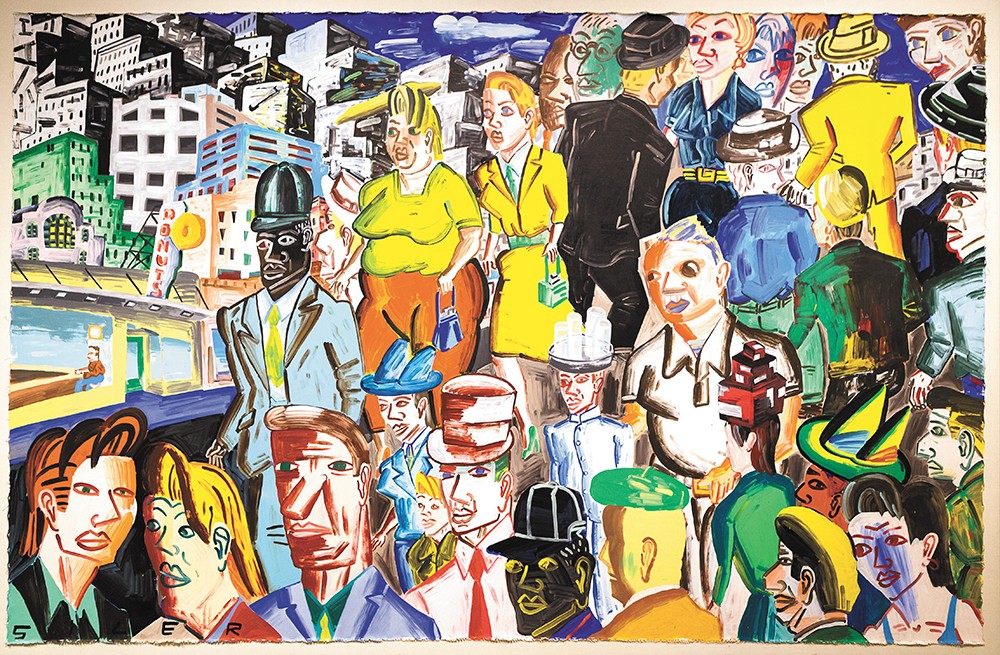 Siler's art is at the same time direct and symbolic in depicting the mundane and everyday. In almost every piece are human subjects; blue-collar, working-class folks and suited businessmen, along with domestic housewives and cityscapes of diverse, bustling crowds. Inspired by the German expressionism movement of the early 20th century, vintage comic-book art, Asian brush art and Mexican muralists, Siler's work is bold and vibrant in line, texture and color, creating eye-catching movement and rhythm. Viewers should look closely and carefully to catch the subtle commentary he inserts into each piece, like the eccentric headwear of some subjects, the subtle and obvious placements of animals and subjects' facial expressions.

Born in Spokane in 1939, Siler was an undergraduate art student at WSU, after which he enrolled in graduate studies at the University of California, Berkeley at a significant time and place for modern art history — the early 1960s. He studied painting at Berkeley, but didn't move on to drawing and ceramics until after grad school.

"Patrick was lucky enough to be in the Bay Area in a pretty critical moment — ceramics were being pushed into new worlds," says exhibit manager Ryan Hardesty. "He was there at a time when abstract expressionism was waning, and other things were afoot; pop art and California funk. There was a lightening of the mood."

Though Siler has since become skilled working with a range of diverse media, ceramics and drawing remain major focuses, as well as combining the two to "draw" on ceramics.

The 1,500-lb. ceramic cylinder in the current showcase is a prime example of Siler's mastery in combining different art techniques. As part of an artist residency program at Mission Clay Products, an industrial pipe maker in Phoenix, Siler created the piece, called Student Traveler in Eastern Washington, using a technique called sgraffito. To create the image on the clay, Siler scratched lines into the surface and then painted the surface with colored glazes.

"I'm painting with ceramic preparations the same way a painter creates an oil or acrylic painting," Siler explains. "That is a challenge I've been thinking about for years — decades, really — painting with clay."

"Meet Me at the Spot" also features less-traditional technique combinations, such as oil and acrylic paintings framed by hand-carved, woodblock-style frames that serve as a three-dimensional extension of the painting.

In contrast to what may come off as a haphazard approach, Siler's process is intentional and planned. The artist says he contemplates each piece long before he creates it, and uses imagery he sees, hears or reads about as his inspiration.

When Siler reads, he says he'll often note page numbers in the frontispiece of books as he comes across sections or phrases that stir his creativity, and he bases his art's human subjects on real people he observes and sometimes sketches in public settings — though he never paints people he knows. ♦