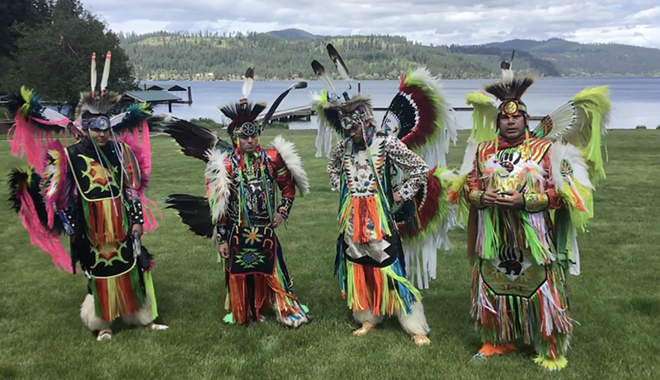 “What’s frustrating for me is, I was a police officer and seeing something like this happen is opposite everything I was taught at the academy,” says Nomee, who served seven years on the tribal police force after being the first state-certified officer in Idaho from the Coeur d’Alene Tribe.

He acknowledges that police often face challenging situations that get emotions and adrenaline running high, but that’s no excuse, he says.

“No matter what, you’re supposed to do what’s right,” Nomee says. “If you can’t do that, how can anyone else trust you?”

Frustrated, he talked with his family, wanting to respond. They considered how they might join the Coeur d’Alene-area protests sparked by George Floyd’s death. The presence of several dozen people outfitted with military-grade weaponry in downtown Coeur d’Alene was a deterrent.

Instead, Nomee says, they chose a place by the lake that’s been sacred to Coeur d’Alene for eons and prayed — through dance. 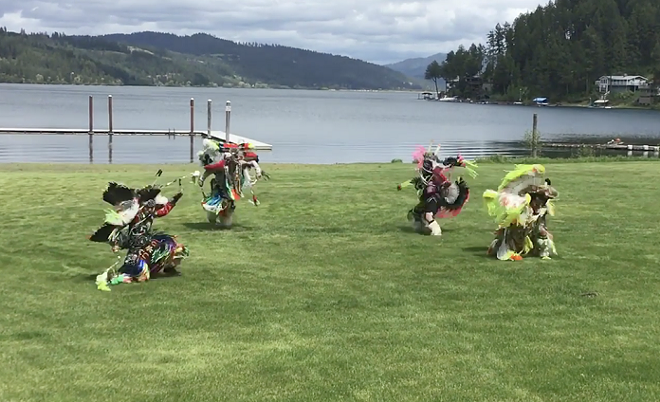 Shaina Nomee photo
Nomee and his sons' spiritual dance for George Floyd was a prayer for peace.
“As I was growing up, from my grandparents and my mom, we were always taught that any time we were out on the dance floor, each step we take, each movement we make is a prayer,” says Nomee, who was joined by his three sons, all in full regalia. His wife, Shaina Nomee, posted a video of them dancing the traditional fancy dance to her social media account, accompanied by a request for donations donations to NAACP and this message:

“With our dancing and prayers we honor George Floyd, Ahmaud Arberry, Breona Taylor, and all of our black brothers and sisters across the nation; across the globe. We hear your cry, you are not alone. In the end, all we have is each other. Lead the Change”


The spiritual dance was part of a larger family conversation about race and current issues, Nomee says, who counts black biracial family members as kin.

“What’s really touched us,” Nomee says, “is a lot of [brutality like that which killed George Floyd] happens to cultures of color and women.”

Nomee would know. As a youngster living in Spokane during the ’70s and ’80s, he experienced racism first-hand, he says, but also experienced it as an adult on the reservation. As he talks his voice drops and you know he’s remembering how the word slapped him.

Although their dance was spurred by what happened to George Floyd, it was also about responding to COVID-19, says Nomee, who sees a parallel in how many people seem to be ignoring the significance of either one.

“If people don’t feel the effect personally, they don’t act,” he says.